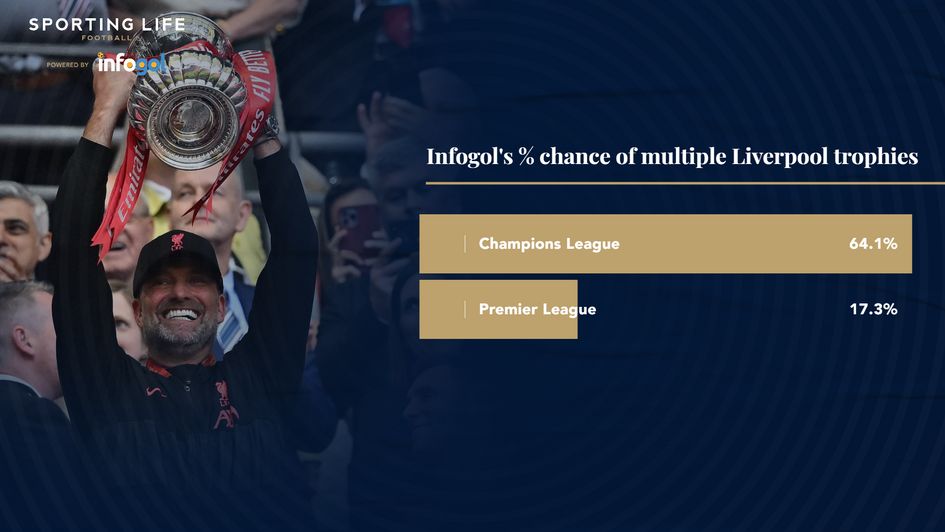 Liverpool have a chance of winning a historic quadruple this season, but can they actually do it? Jake Osgathorpe runs the numbers.

Liverpool are an exceptionally good football team. We all know that already.

But talk of a quadruple is simply mind-boggling.

One team winning a domestic treble and the Champions League; it would surely be the most incredible feat ever seen in team sports.

It is possible. There is a chance of the Reds doing something stunning, and the fact we are still talking about it as a possibility in May is impressive in itself.

Having already bagged the Carabao Cup and FA Cup after beating Chelsea on penalties in both finals, Liverpool have also progressed to the Champions League final, and were offered a ray of hope by West Ham at the weekend, who held Manchester City to a draw.

The Reds have since beaten Southampton, meaning they are just one point behind Pep's side heading into the final day, so if City fail to win at home to Aston Villa and Liverpool beat Wolves at Anfield, Klopp's men will be crowned champions.

Quadruple would be expensive for bookies

If Liverpool do manage to complete a historic quadruple, it is set to be costly for the bookmakers.

Betfair are set to pay out a whopping £1.5 million if Liverpool can bring home all four trophies, with punters having backed the Reds in that market from as big as 500/1.

As for Sky Bet, they had a Liverpool quadruple priced up at six times that price, at an eye watering 3000/1!

Two customers each staked £30 at 2000/1, and would scoop £60k each should Jurgen Klopp's men do the unthinkable and lift every major trophy.

Let's assess the chances Jurgen Klopp's side have in each competition.

Can Liverpool win the Premier League?

Winning any of the remaining two competitions will be tough, but the league title may be the toughest, as their destiny is out of their hands.

A 2-2 draw at the Etihad last month meant Manchester City retained their one-point advantage at the summit of the league, but Liverpool's 4-0 demolition of Manchester United at Anfield on Tuesday was a statement of intent that this Liverpool team are going nowhere.

Both teams had held serve until this weekend, when Liverpool were frustratingly held to a 1-1 draw by Tottenham, meaning City moved three points clear after a 5-0 thrashing of Newcastle - a result that also means Pep's side now have a better goal difference than the Reds.

Midweek wins for the pair means its as you were, though City again enhanced their goal difference advantage over Liverpool to seven.

After the past few days though, with Manchester City drawing with West Ham and Liverpool beating Southampton on Tuesday, the Reds' chances of winning the title have increased from 4.9% last week to 17.3% this.

They go into the final day just one point behind City, and know if Pep's side don't beat Aston Villa and they win against Wolves, that the Premier League title will be Anfield bound, and would complete the domestic treble.

Liverpool are through to their THIRD Champions League final in just five seasons.

Incredible record in this competition.

Their xG rolling data in that time ⬇ pic.twitter.com/Uv3ytTBudz

Can Liverpool win the Champions League?

Liverpool survived a huge scare in their semi-final second leg at Villarreal as the Spanish side scored twice in the first half to level the tie at 2-2 on aggregate.

However, they showed their mettle after the interval as goals from Fabinho, Luis Diaz and Sadio Mane sealed the Reds' place in the final on May 28.

Liverpool had one foot in the final after a 2-0 first leg win at Anfield, a game in which they limited the Spaniards to just one shot all night (xG: LIV 1.70 - 0.07 VIL).

The second leg was a far more frenetic affair (xG: VIL 1.51 - 1.41 LIV) but the Reds prevailed to reach a third Champions League final in five seasons.

A shock comeback from Real Madrid against Manchester City means the final will be a repeat of the 2018 edition, which Madrid won 3-1.

These are two different teams now though, and the result actually saw Liverpool's chances of lifting the 'big eared' trophy increase from 51.2% to 64.1% rather than decrease, which would have been the case had City progressed.

We are set for a blockbuster final nonetheless, with the Reds the firm favourites to win the Champions League.

How likely is it Liverpool do the quadruple?

Fighting on all fronts is a difficult task for any team, and Liverpool have shown that they are more than capable of doing so, but in the league they have come up against a ruthless juggernaut who haven't dropped the ball.

Since beating beating Chelsea in the FA Cup and Southampton in the league, and Manchester City slipping up at West Ham, they have shortened to 8/1 (11.1%) to win the remaining two competitions.

They still require a major slip-up from Manchester City at home to Aston Villa, with the irony being Steven Gerrard (now manager at Villa) could finally win his beloved Liverpool a league title. The Reds obviously have to beat Wolves to have any chance, but we hopefully will get to witness another thrilling final days action.