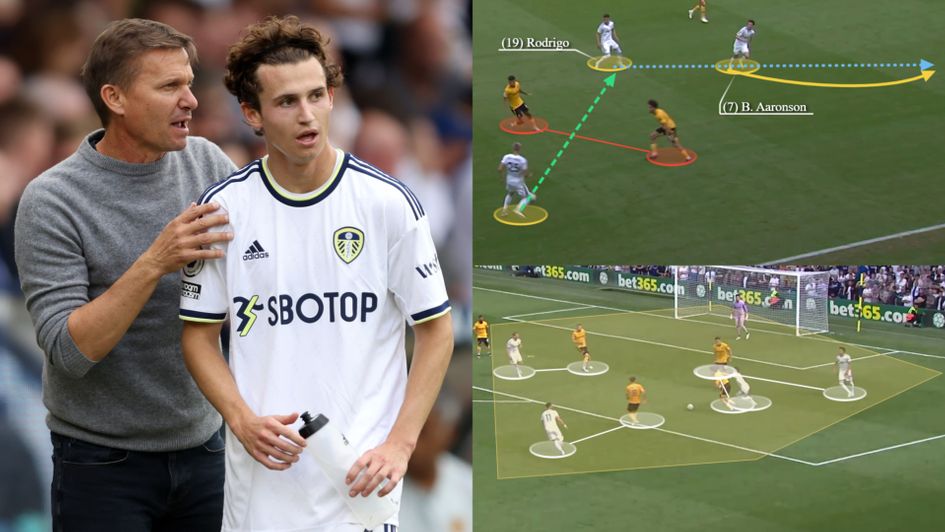 Leeds started the season in encouraging fashion by recording a hard-fought 2-1 win over Wolves in front of the Elland Road faithful.

Considering they didn't win any of their opening six Premier League matches last season, the Whites will be delighted to get the ball rolling early after a summer of upheaval that's seen them lose their two best players in Raphinha and Kalvin Phillips and bring in a host of new faces.

Although the performance was by no means perfect, there was still much to get excited about, which they'll surely look to build on as the season progresses and their new players further integrate to life under Jesse Marsch.

How did Leeds set up under Marsch?

Deploying his team in what was ostensibly a compact 4-2-3-1/4-2-2-2 mix, Marsch's men raced out of the blocks with intensity to immediately pile the pressure on Wolves.

Pressing high in a coordinated and aggressive manner, this set the tone nicely for them to stamp their authority in the first half especially. 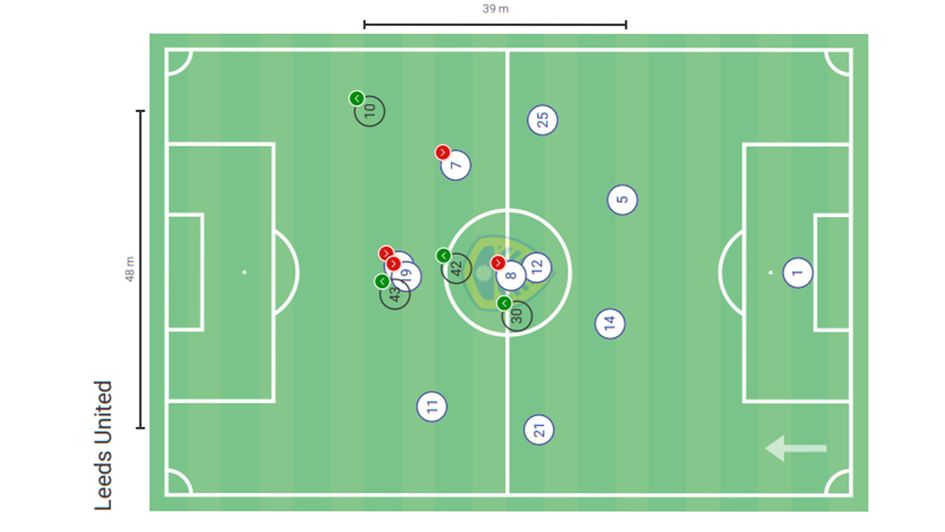 To start with, one of Leeds' front two when harrying, Rodrigo and Patrick Bamford, would go to the ball near centre back as the other would shuttle across to mark the deepest Wolves midfielder while still maintaining access to the ball far central defender.

The ball side winger, either Jack Harrison or Brenden Aaronson, would then wait till the ball was played to the closest Wolves fullback and press them diagonally to use the touchline as an extra defender and to block central passing lanes using their cover shadow.

The ball far winger would notably then tuck infield and help the midfielders, who were either covering space, a dropping forward or stepping out to press, deal with the nearest Wolves centre mid. 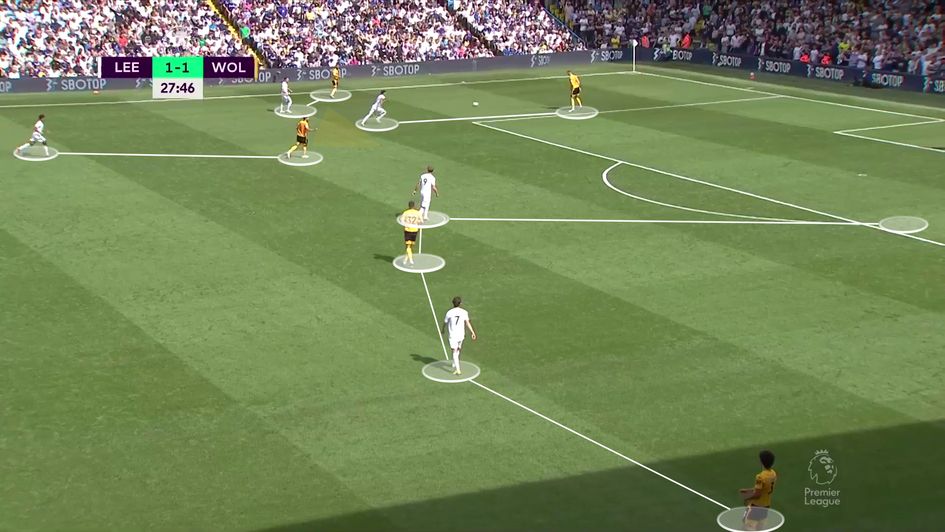 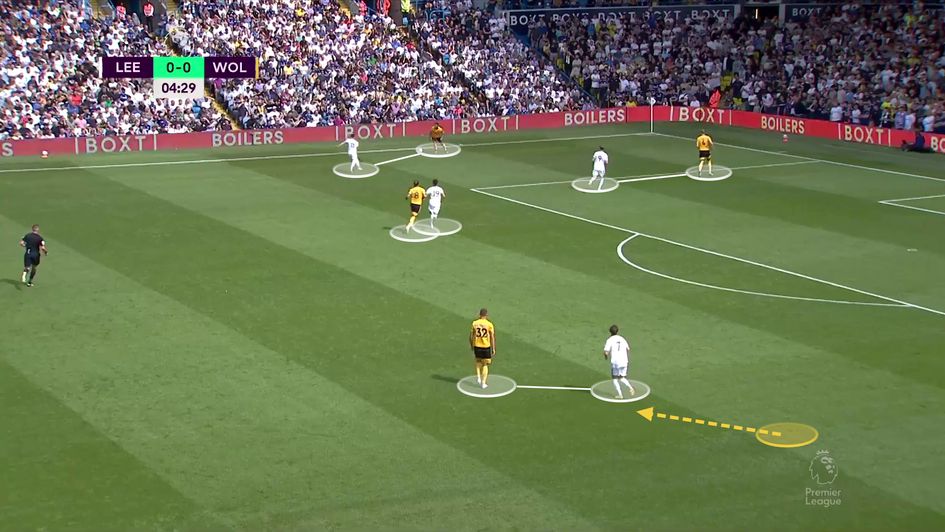 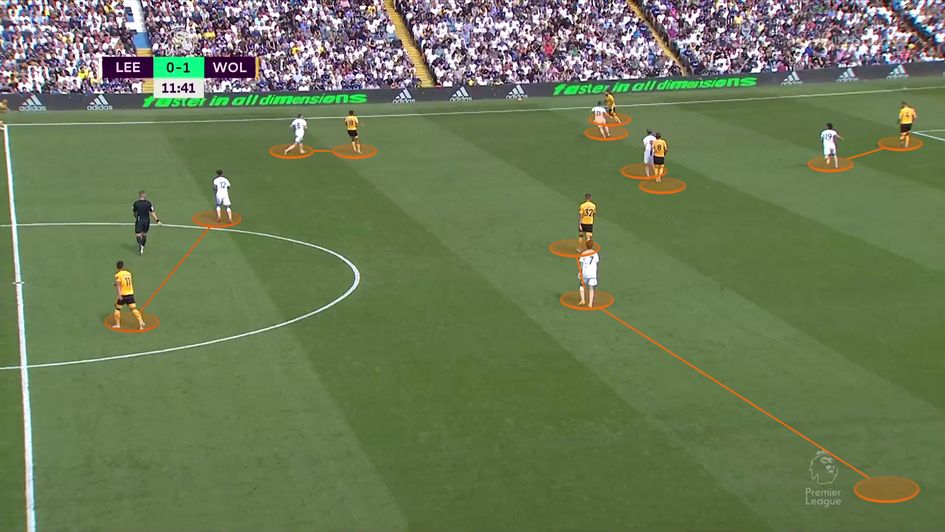 Causing a slew of turnovers in the opening exchanges, Leeds successfully stifled Wolves with their aptitude in this regard, as they shifted smoothly, knew their roles, were awake to triggers and supported each other superbly.

The graphic below highlights where Wolves' 115 ball losses occurred throughout the game and underlines particularly how fiercely Leeds hunted their adversaries as a collective in the first period, with them forcing a heap of turnovers when Wolves were looking to build out from the back that led to shots. 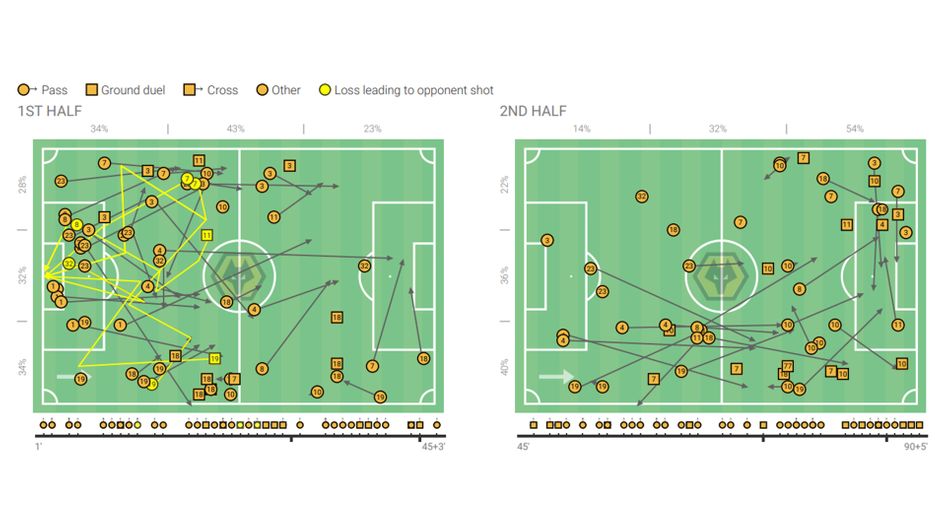 Leeds' swift counterpressing immediately after losing possession deserves mention too, for they reacted sharply once the ball was lost in advanced areas.

Swarming Wolves instantly, hoping to regain the ball to attack again high up, their opener offered a testament to the afore, where they sprung into action to recover the ball before Rodrigo slammed home his powerful finish. 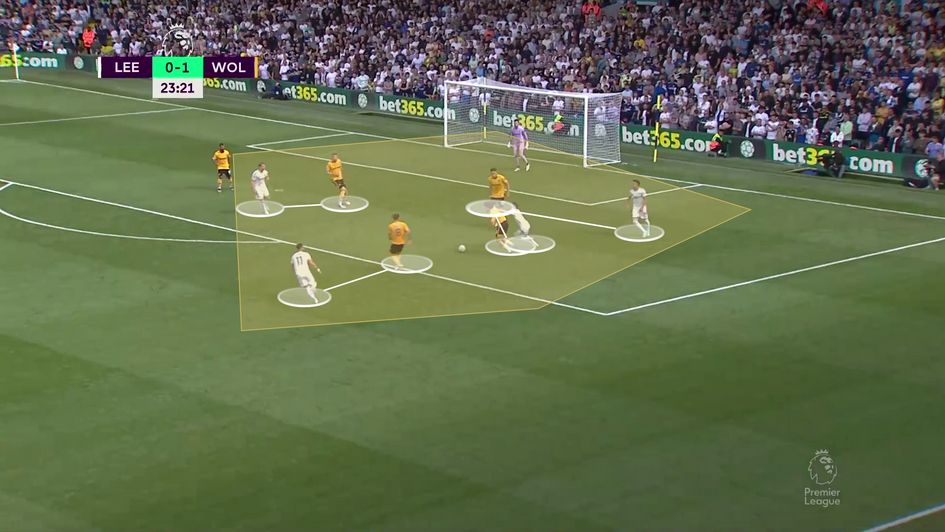 Brilliant couterpressing prior to their opener

Switching the focus to their offensive output, and debutant Aaronson was certainly a standout, as the man who has previously worked under Marsch at Red Bull Salzburg injected plenty of dynamism into Leeds' attacks.

Operating predominantly in the right half space and in between the lines centrally, the American livewire was a constant thorn in Wolves' side due to his intelligent movement, mazy dribbling and tidy passing.

Offering himself as a fantastic outlet to link play and to combine quickly with his fellow attackers, his crisp passing and movement helped breathe life into many an attack. 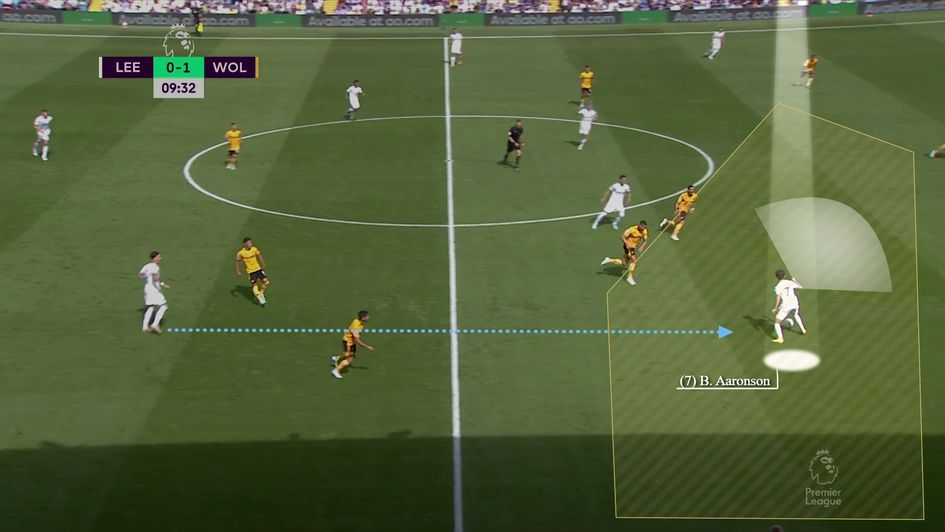 Aaronson smartly receiving between the lines

It was also notable how he'd generate midfield overloads when checking deeper, made some darting depth runs and how his indented positioning helped create room for right back Rasmus Kristensen to maraud upfield on the overlap. 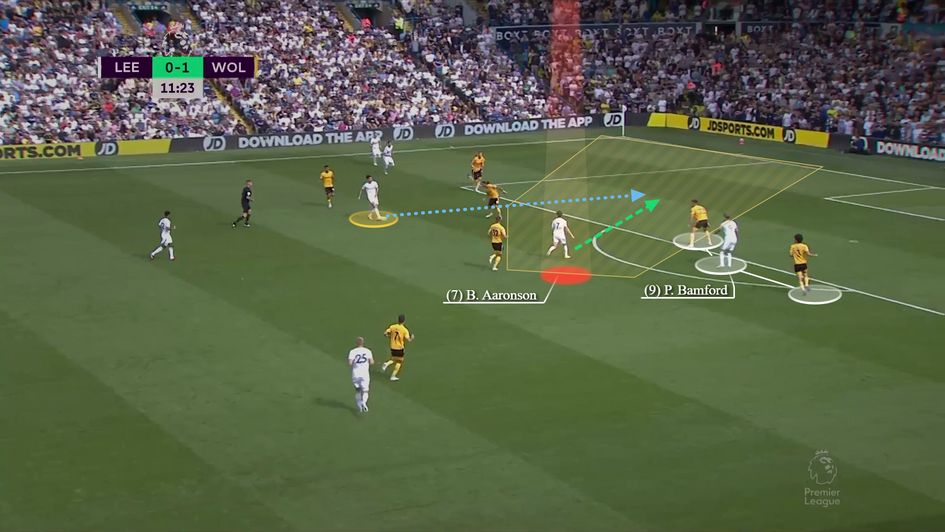 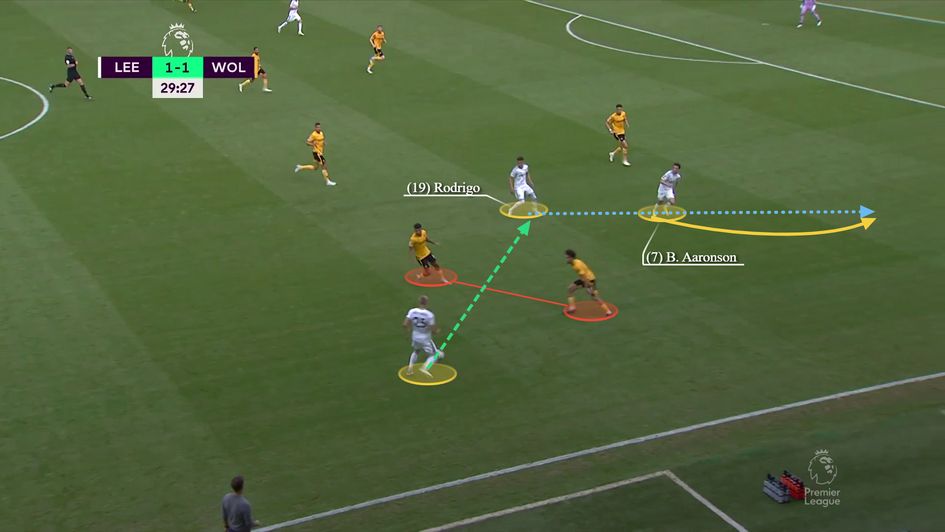 So nimble, possessing a low centre of gravity, adept at adjusting his receiving angles to protect the ball from opponents and a master at weaving away from danger with his wicked changes of pace and direction and shimmies, his dribbling was a real highlight as well.

To punctuate his fine body of work, not only was he the man who won back the ball prior to Leeds' first goal but his penetrative run was the catalyst for Rayan Ait-Nouri bundling in an own goal that ultimately secured victory for the Whites. 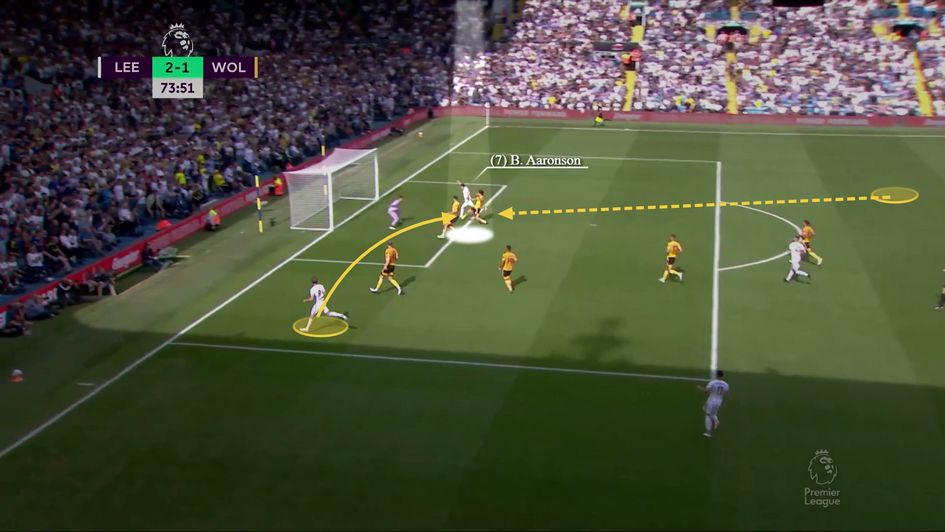 While Aaronson's electric display gave the Leeds fans a glimpse of what to expect in the future, so too did the solid showings by Marc Roca and Tyler Adams.

Forming a strong double pivot in central midfield, the duo performed their roles coherently. Giving balance, structural security ahead of their backline, winning the ball back frequently and undertaking their responsibilities admirably, they both enjoyed handy debuts.

For Roca, the way he'd often drop deep and form a back three was crucial in helping Leeds' generate a numerical superiority in build up and so he could be granted extra time and space to use his exceptional passing to set up attacks and dictate the tempo. 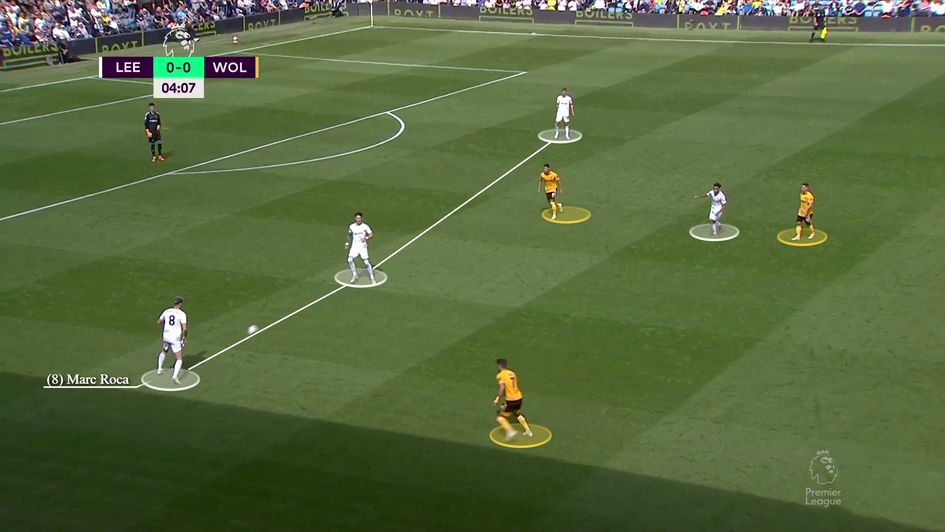 Then, in the case of the ultra fit and energetic Adams, he would usually be stationed higher up to be an option for line breaking passes and to be an outlet for the dropping attackers to link up with.

Regularly asking questions of Wolves with their asymmetric positioning and their clean ball use, this, in alliance with their combined 14 ball recoveries, seven won ground duels, three tackles and three interceptions demonstrated their valuable all-round contributions.

What does it mean for the future?

Even though there was much upside to be extracted from the win, Leeds' drop off in the second half, their many sloppy errors and questionable defending at times were cause for alarm.

But all things considered, it was a good day at the office when taking into account all the players making their debuts and the chaoticness opening day typically brings. 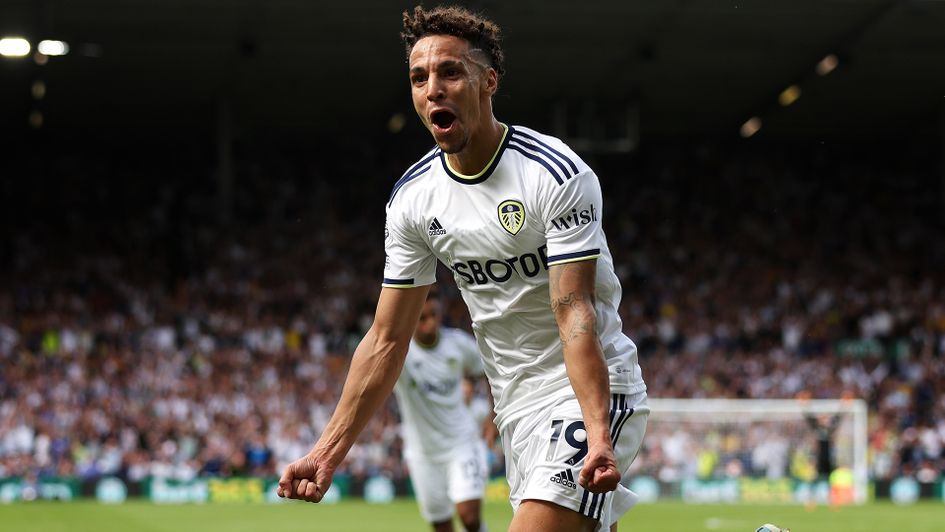 While it'll inherently take time for all the new acquisitions to assimilate fully into Marsh's system and life at Leeds, the early signs were definitely uplifting that they can grow into a quality team and quickly adapt to his tactical concepts.

Having already banked their first win and facing a reasonably friendly fixture list that sees them face the likes of Southampton, Everton, Brentford and Nottingham Forest in the next month, there's every chance they could find themselves settled nicely within the top half of the table.

After the struggles of last season, that would represent a fine start and ensure they're ideally placed to continue to go from strength to strength under the meticulous tutelage of Marsch, who will be giving his all to transform this Leeds team into a formidable force sooner rather than later.