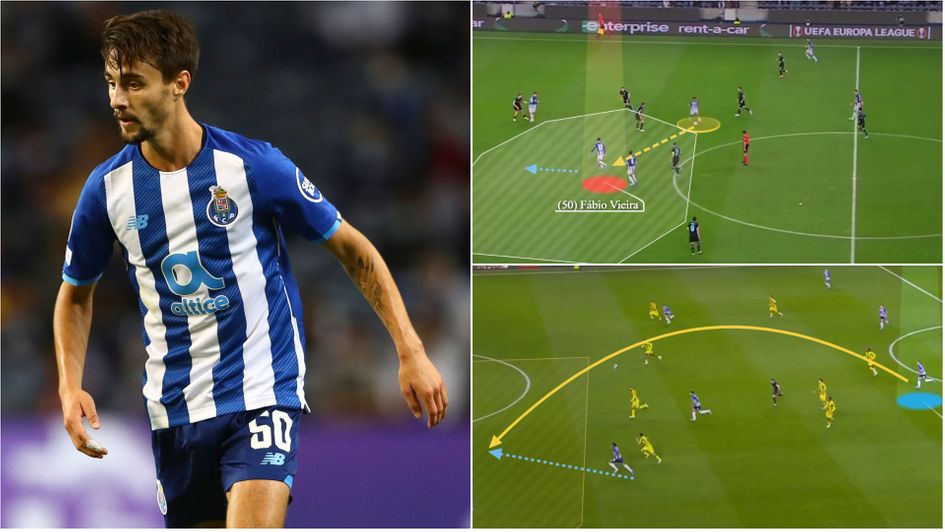 What will Fabio Vieira bring to Arsenal?

Fabio Vieira: What can Arsenal expect from new signing

Intelligent, technical and never afraid to get stuck in defensively, Arsenal's signing of Fabio Vieira is one littered with upside.

Joining the Gunners in a £35m deal from FC Porto off the back of a season where he was an integral component towards Sergio Conceicao's men winning the league and the cup, the 22-year-old proved his quality on his way to registering seven goals and 16 assists in all competitions.

Having made his professional debut in June 2020 Vieira's progress has been rapid, which notably saw him go from five goal involvements in the 2020/2021 campaign to the aforementioned 23 last term.

It must be said, however, that 17 of his 39 appearances last season were off the bench, showing that despite his talent, he wasn't always a guaranteed starter. But following the departure of star man Luis Diaz to Liverpool in January, Vieira was granted greater responsibility by Conceicao, which he relished during his exceptional close to the season.

Maturing into not just an elite attacking player who can play all across the frontline including as a false nine, but also growing as a disciplined, determined defensive force working under the dogged Conceicao, Vieira arrives in north London ready to hit the ground running.

Where will Vieira play?

How and where he's deployed by Mikel Arteta will be intriguing, for he loves drifting infield from a nominal wide berth and operating in more central areas, which certainly gives Arteta options. 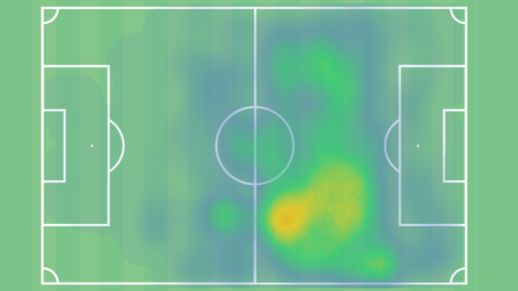 Extremely clever with his movement and quick to exploit vacant spaces predominantly in the half spaces or between the lines, but also out wide, inside the box or when dropping deeper into midfield, opponents struggle to keep tabs on him.

Frequently causing dilemmas for defenders in regard to who marks him in what zone, this indecision is enough to give him the separation he needs to receive possession in dangerous areas.

So aware of his surroundings due to his sound head scanning, this gives him a constantly updated mental imagery of where opponents, teammates and the spaces are in relation to the ball. 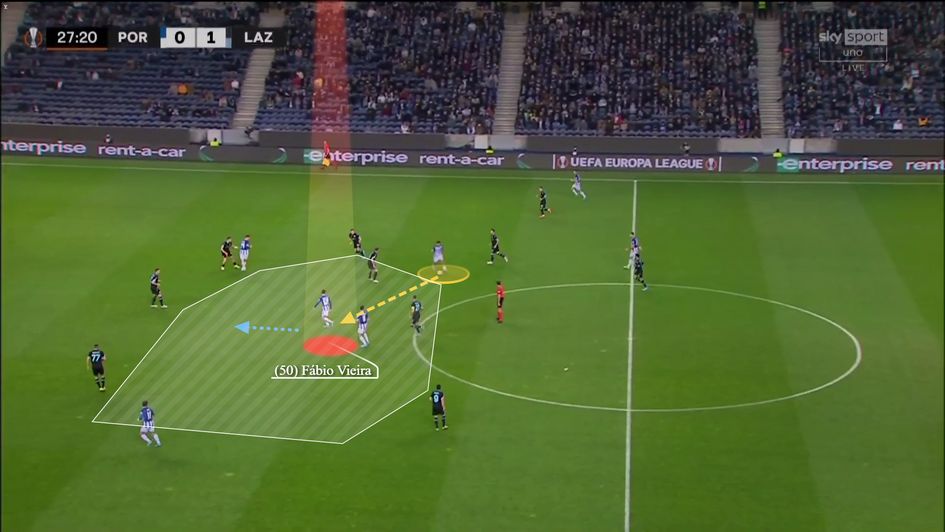 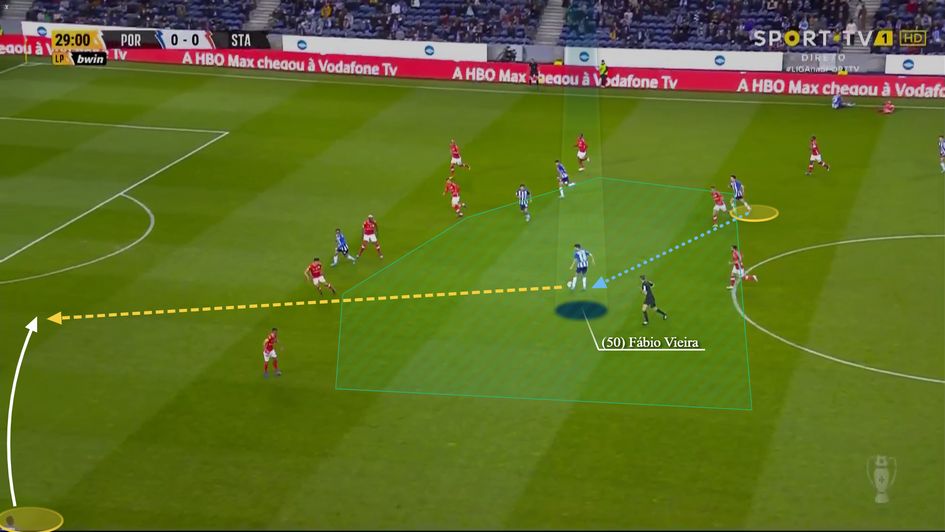 As a result, the elegant maestro expertly finds space while knowing if he needs to protect the ball, spin away from incoming pressure, hold up the ball, immediately bounce layoffs or turn and get on his bike.

He is very resistant to pressure due to his slick first touch and ball control, ensuring he's a real handful with the ball at his feet. Capable of keeping the ball and outfoxing opponents when under duress with his balance, sharp changes of pace and direction, nifty feints and crafty shimmies, Vieira's an elusive proposition on the dribble.

His outstanding passing game duly amplifies his worth, as he's a wizard at creating chances and pinpointing teammates in advantageous areas to progress attacks. Boasting a wand of a left foot, which comes in handy both in open play and in set piece scenarios, he has a pass to match just about any situation while typically releasing his passes at precisely the right moment.

Able to hit penetrative line breaking passes into his fellow attackers, combine intricately in close quarters, thread through balls in behind or down the channels, launch trademark switches and find targets with measured crosses, his capacity to spot and oblige runners is a joy to watch. The way he disguises his passes with his eyes and body shape compounds issues for foes by unbalancing them before catching them off guard. 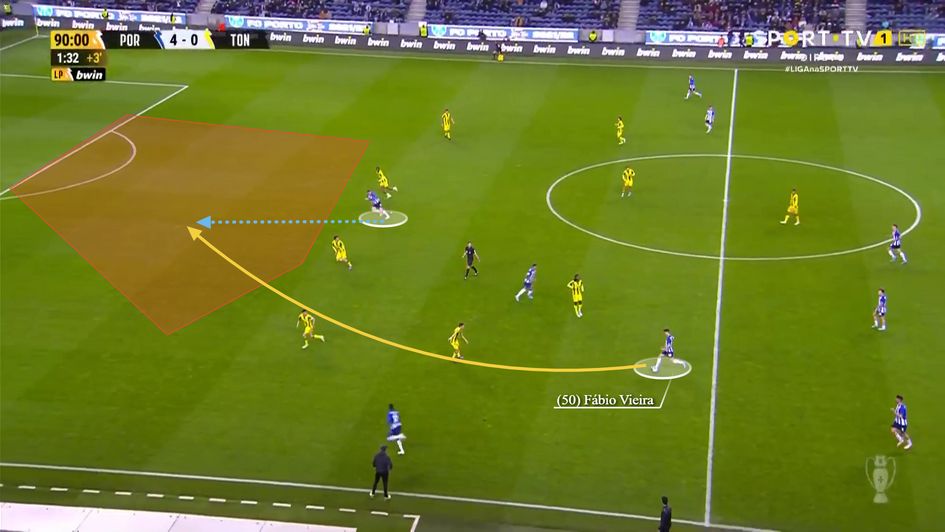 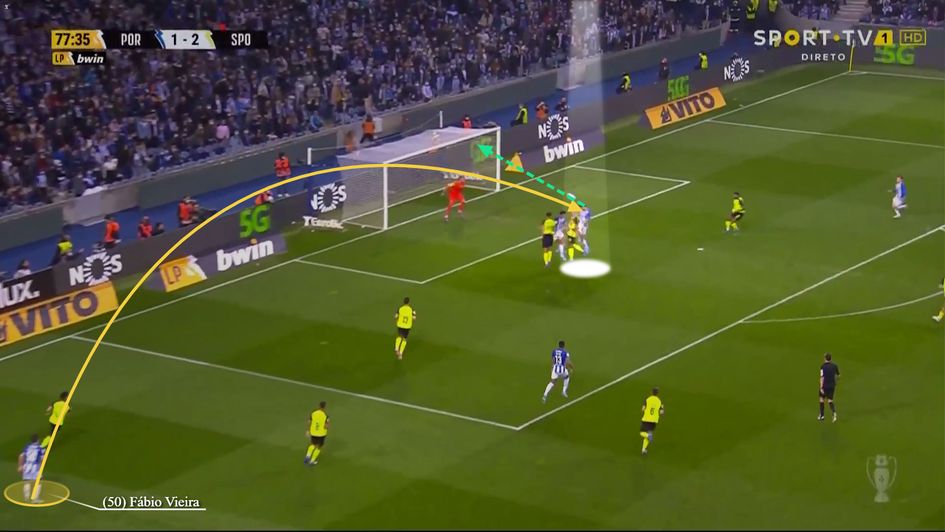 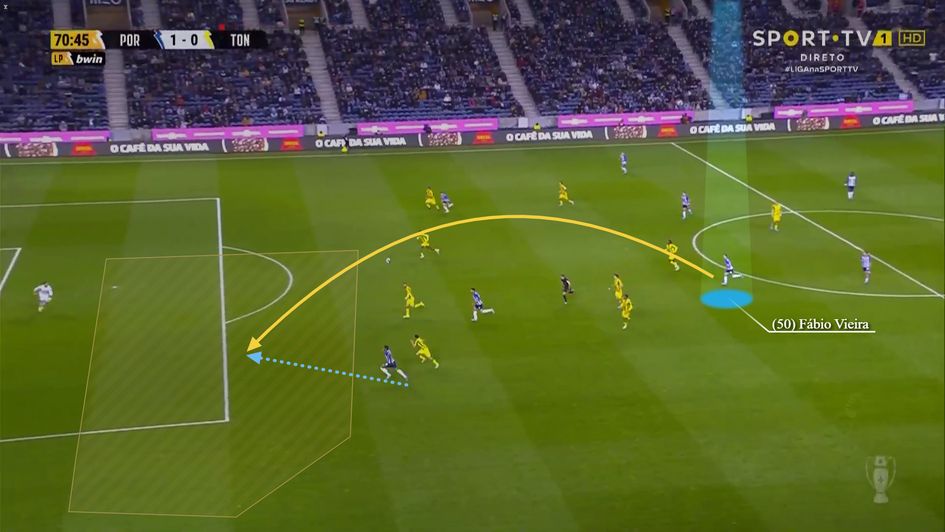 Perfectly weighted through ball in behind 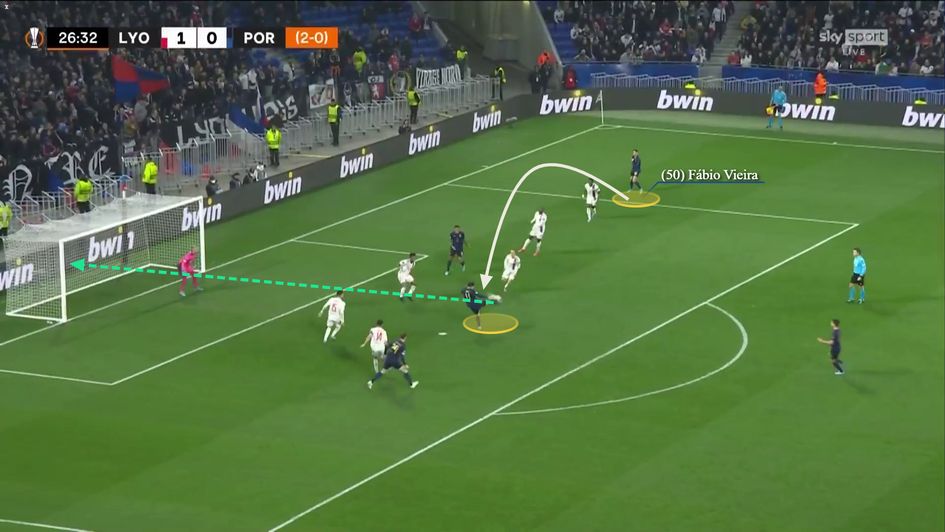 Set to be a real asset for Arteta's men when confronted with deep sitting defences, his composure, imagination, vision, reading of the game and execution should see him breathe life into many attacks.

Possessing a handy eye for goal as well, once he's in range, the two footed midfielder backs himself to find the back of the net using a mix of power, finesse or placement. 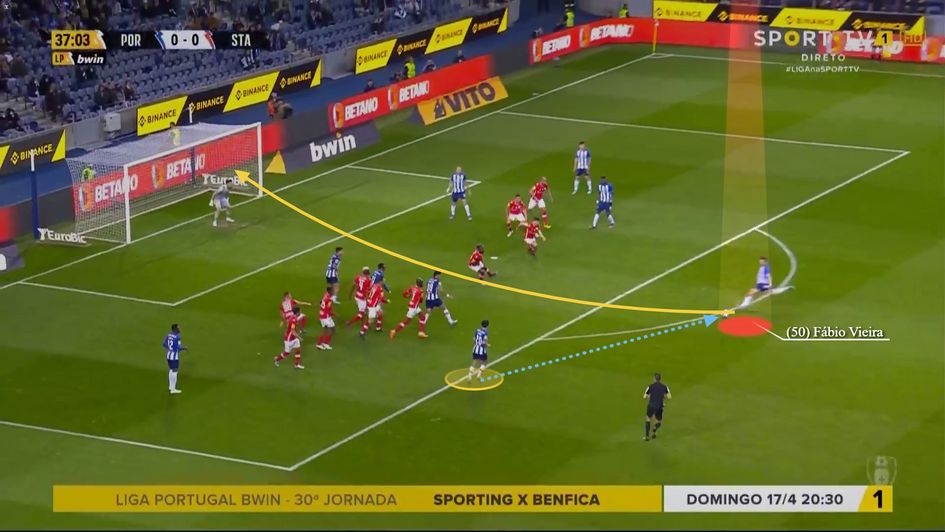 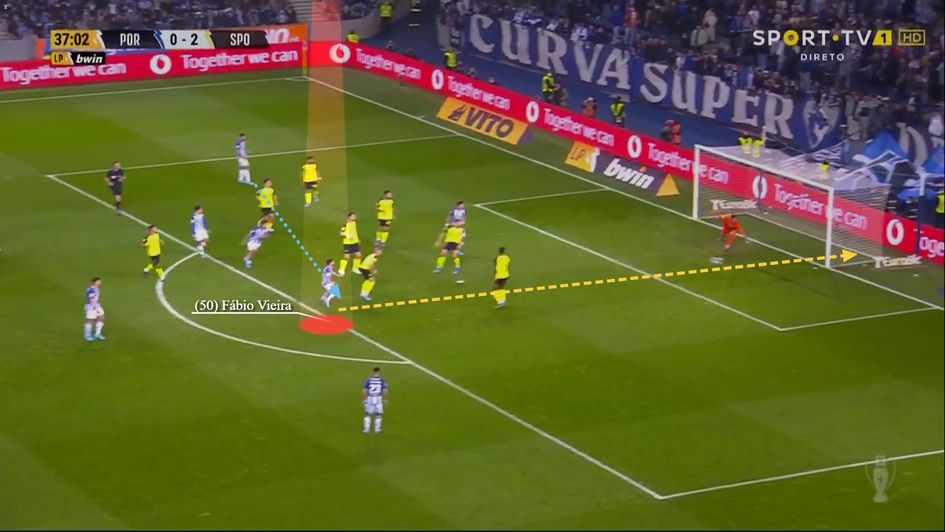 Meanwhile, on the defensive end, the diminutive Portuguese U21 international doesn't shirk his duties, for he presses aggressively, tracks back with vigour, fulfils marking assignments, supports colleagues and is fierce in the challenge.

How does he compare to Odegaard?

By the numbers, looking at the below tables from Wyscout, it’s remarkable how he stacks up against Martin Odegaard, a player similar to him in many ways, with him holding the ascendancy in a host of key offensive and defensive metrics. 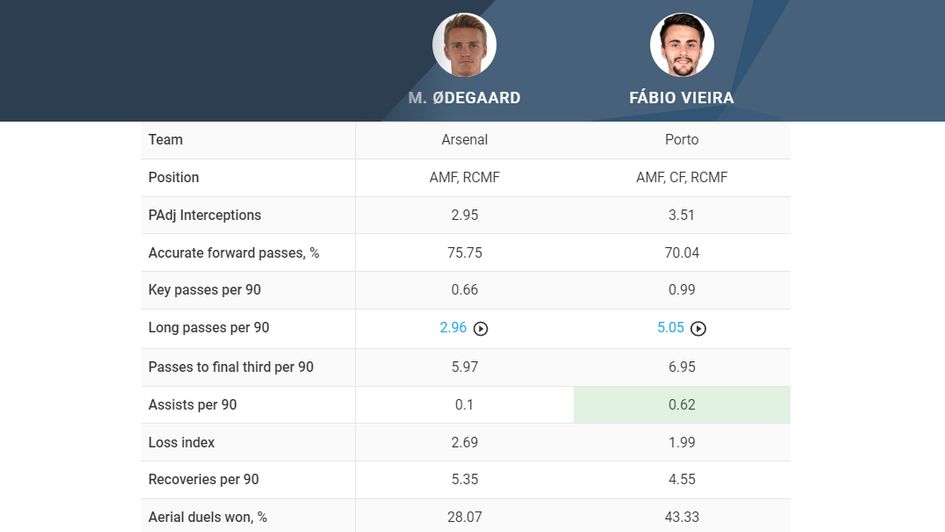 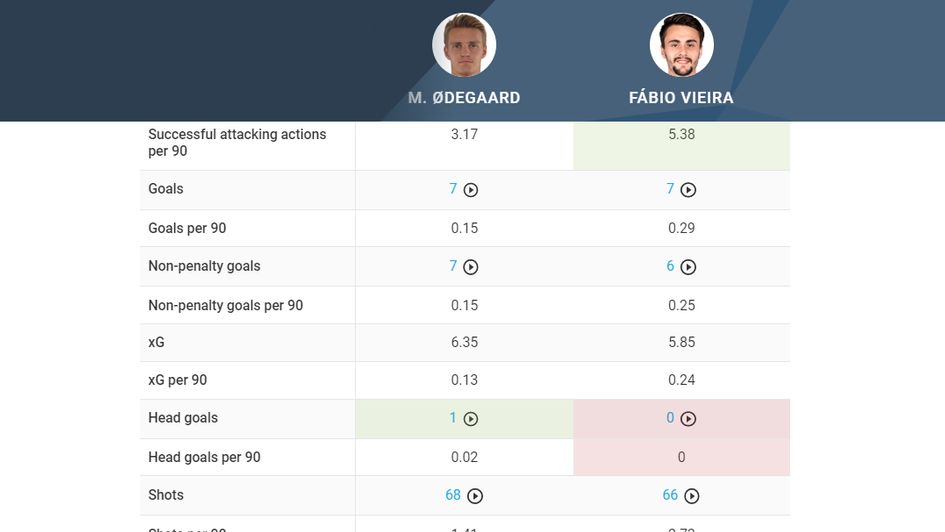 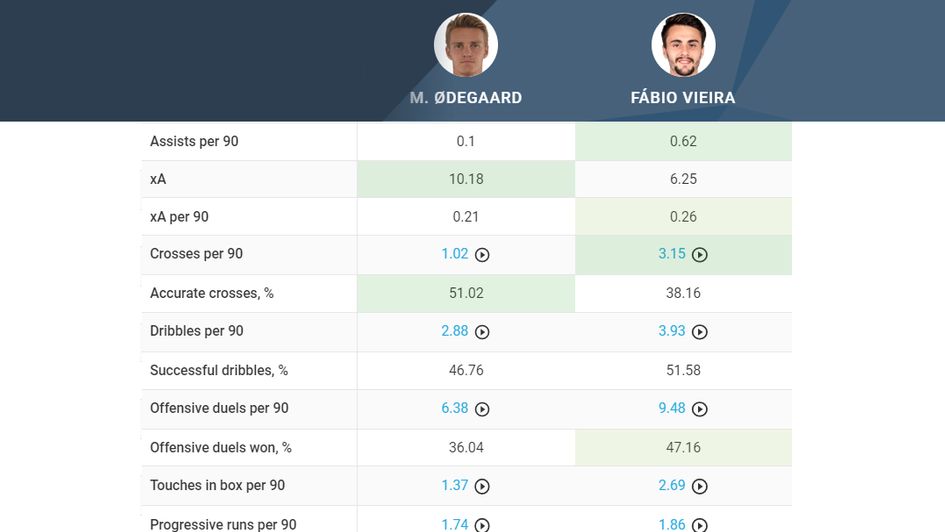 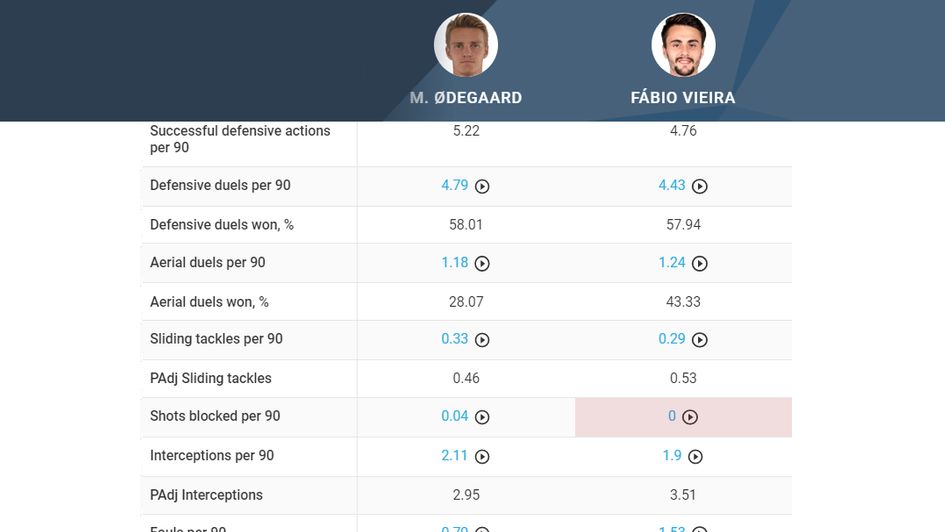 Eager to follow in the footsteps of the likes of Bruno Fernandes and former teammate Diaz by shining immediately upon switching the Primeira Liga for the Premier League, seeing how he fares with Arsenal will be fascinating.

Working under a tactically sophisticated coach who works well with young players in Arteta should ensure he's given every chance to become a success too.

Patience will have to be exercised, though, for he'll inherently need time to adjust to his new environment and the demands of English football, as he's quite wiry and lightly built. Moreover, seeing as he's only started 20 professional games for Porto punctuates that he'll need to be given time to adapt.

With the acquisition of Vieira now finalised to complement their already strong offensive options, Arsenal will now turn their attention to securing Gabriel Jesus from Manchester City. Considering the Brazilian has previously worked with Arteta when he was Pep Guardiola's assistant at City and he's desperate to start matches, Arsenal are well placed to snap him up. 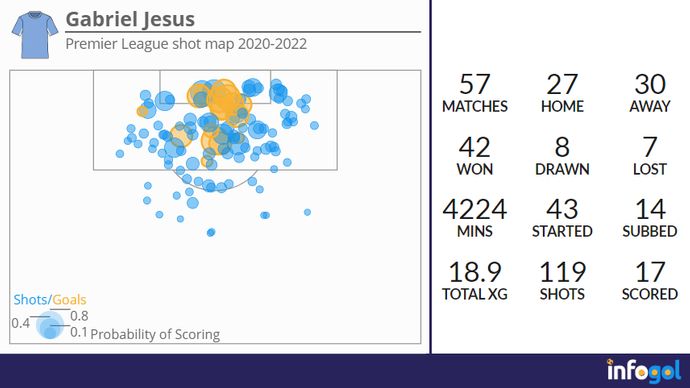 In need of a proven goalscorer, the man who's scored 95 goals and supplied 46 assists in 236 appearances for City would unquestionably be an ideal purchase. Upon factoring in that he was frequently forced to come off the bench, and this makes the 25-year-old's output even more admirable.

Leeds sensation Raphinha is another being linked with a move to the Emirates, but with Arsenal well stocked in their offensive ranks and him set to cost upwards of £60 million, this move probably doesn't make sense at the minute.

Furthermore, rumours that Leicester City midfielder, Youri Tielemans, could be on his way keep persisting, but if reports are to be believed, interest has cooled as Arsenal are keen to reinforce their defence as a priority, with Ajax's Lisandro Martinez on the top of the list.

Still with over six weeks to go until Arsenal's season opener against Crystal Palace, time is on the Gunners side in their quest to further bolster their squad. They'll want to move quickly, however, so any new players can crucially have time to settle and enjoy a preseason - just like they've done in the case of Vieira.