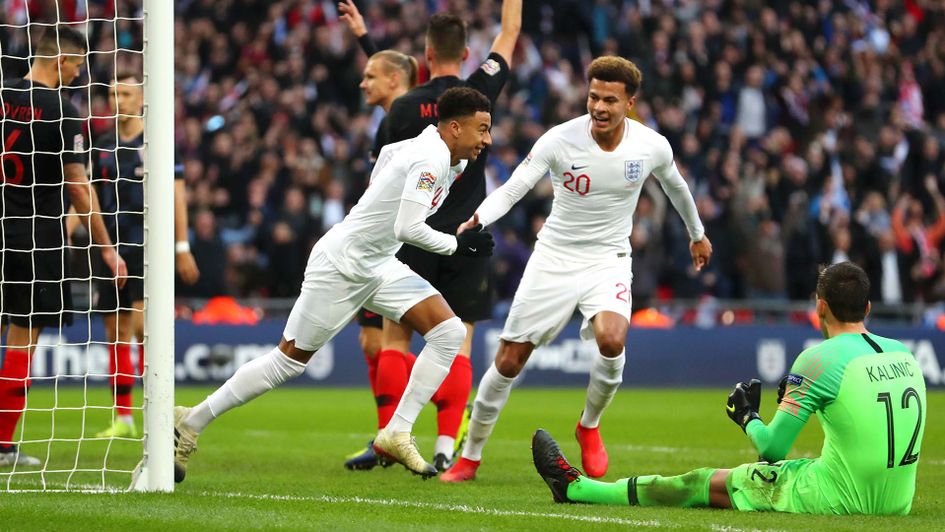 Jesse Lingard celebrates scoring for England against Croatia at Wembley

England’s comeback victory over Croatia has seen them installed as the 9/4 favourites to win the inaugural UEFA Nations League next summer.

Sky Bet have Gareth Southgate’s men at the head of the market to become the first name on the new international trophy when the finals take place in Portugal next June.

Three of the four semi-finalists are already known, with England being joined by hosts Portugal and Switzerland after the latter amazingly overturned a 2-0 deficit to beat Belgium 5-2 to make the final four.

The final spot will be taken up by either world champions France or the ever-improving Netherlands. Ronald Koeman’s side need just a draw in Germany to make it through their group after beating the French on Friday.

For a tournament that was met largely with derision when it was announced, the Nations League could prove to be a huge building block for Southgate's young England side.

Instead of playing friendly games with nothing on the line in front of a half-full Wembley of apathetic England fans, the likes of Jadon Sancho, Harry Winks and Callum Wilson have tasted competitive games and engaged crowds - culminating in a cup-tie atmosphere against Croatia.

"I am very proud of what the players have done, not just today, but throughout the whole year."

Increased competitive action with serious consequences also seems to have brought more out of Harry Kane, Raheem Sterling and Jesse Lingard, among others, judged by the way they responded to adversity by reversing their World Cup defeat against Croatia.

Southgate also seems to have found an alternative system to the three at the back that did the job in Russia but had obvious flaws going forward - and the form they showed away in Spain in particular points to a bright future for a vibrant, young, attacking side.

Winning the Nations League is now a serious proposition for England, given that Portugal have hardly impressed while playing without Cristiano Ronaldo and Switzerland are not as formidable as their win over Belgium would suggest.

World Cup winners France have also not looked as good as they did in Russia, while the Netherlands may well be on the way back but still have work to do.

Just having the extra games next summer with something on the line will help Southgate find out more about his players, much more than any number of friendlies punctuated by endless substitutions, so without doubt the Nations League has been a real blessing for this growing England side.

England will learn their semi-final opponents for their summer trip to hosts Portugal on December 3. The semi-finals will be played on June 5 and 6, with the third-place match and final held on June 9 - while other teams are playing Euro 2020 qualifiers.

The team who triumphs in the final will be crowned the inaugural Nations League winners. However, that is as much as the achievement will get them. There is no European Championship qualification benefit.