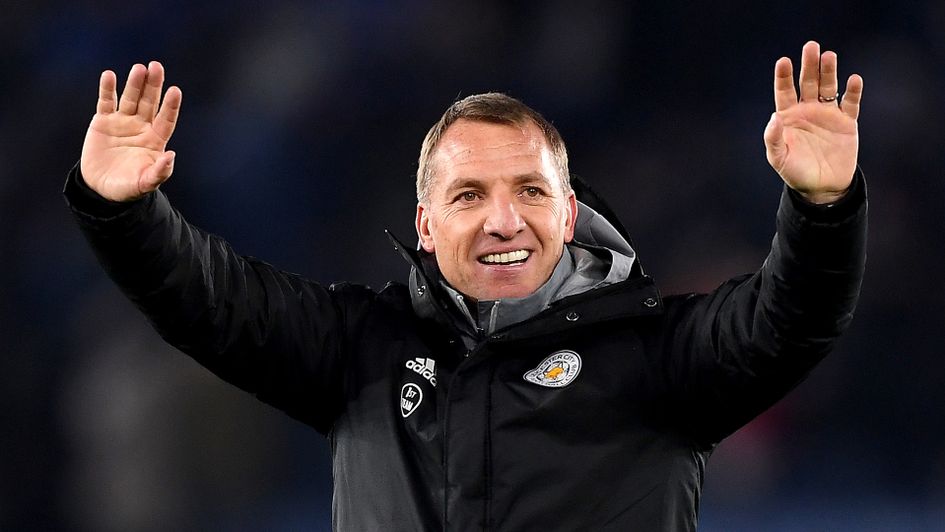 Will Leicester make the top four or are they collapsing again?

Defeat at the hands of champions-elect Manchester City before losing to high-flyers West Ham is hardly a sign that a club should be unsettled, yet there is a feeling that Leicester are on the brink of a Premier League collapse for a second successive season.

The position they find themselves in this campaign is certainly familiar to last, holding third place in the league table by a diminishing margin.

Sunday's Super League revelation has since rocked the football world, perhaps demeaning the importance of a top-four finish, but Brendan Rodgers' recent comments regarding another collapse had already aged poorly.

Ahead of their trip to West Ham, he asserted that "to be stronger and to improve the mindset, you also have to have failures as well", claiming to have seen a "maturity" in his squad. 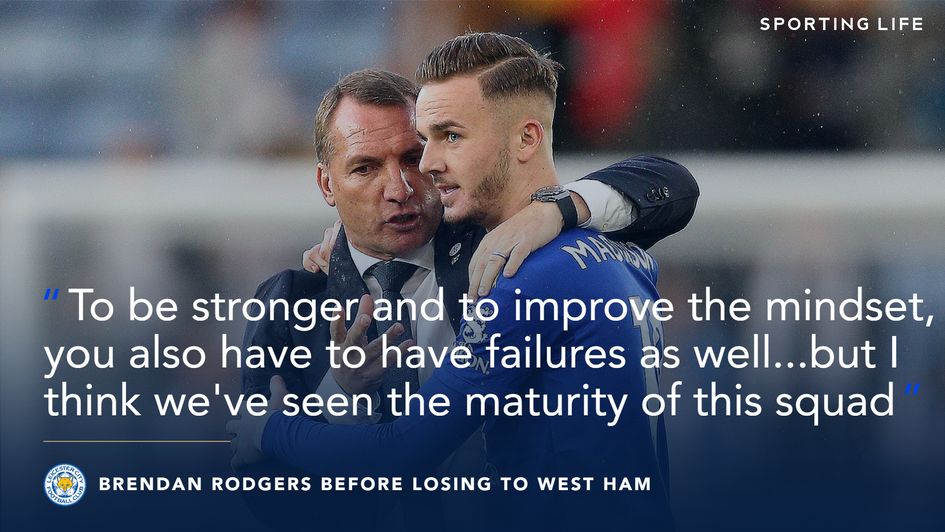 So perhaps we shouldn’t be surprised that Leicester quickly fell 3-0 behind at the London Stadium after James Maddison, Ayoze Perez and Hamza Choudhury were left out of the squad due to breaches of Covid-19 protocols. A lack of discipline is as clear sign as any of a team losing its way.

Leicester failed to recover from the deficit, ending with a 3-2 loss which trimmed their top-four safety to just two points, undoubtedly awakening the ghost of seasons past.

A smooth progression to the FA Cup final against an out-of-form Southampton side was a welcome distraction, but the Foxes are under even more pressure from the chasing pack without kicking a ball in the league.

Whether it was the long mid-season lockdown or the fact that Leicester still held a very comfortable cushion over fifth place heading into the pause in play, their decline was more elongated and gradual than many will remember.

Leicester were keeping pace with eventual champions Liverpool through to mid-December in the 2019/20 season, winning 12 of their opening 16 league games.

Based on their underlying numbers, that lofty position was wholly justified at the time, averaging an impressive 1.96 expected goals for (xGF) and 1.05 expected goals against (xGA) per game, widening the gap between their rolling xG trendlines. 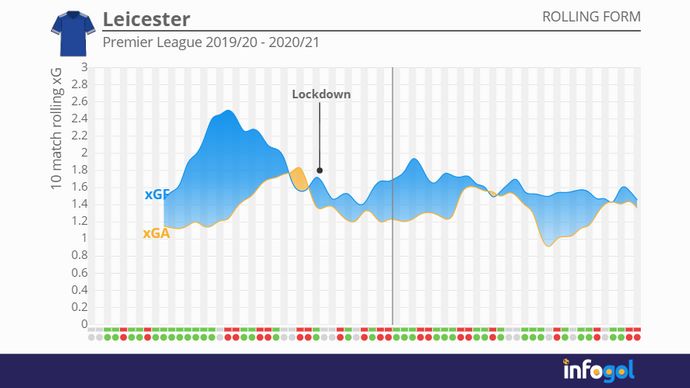 However, even before long-term injuries to Maddison, Ricardo Pereira and Ben Chilwell compounded matters, performances took a downward spiral.

Leicester won just four of their next 13 Premier League matches before the postponement of the season, recording a negative expected goal difference during that span (-0.7 xGD). They also missed out on a place in the Carabao Cup final in that period, losing to Villa in the last four.

The short-handed Foxes were unspectacular upon the resumption of football, swept aside by Chelsea in the FA Cup before subsequently falling to fifth place in the Premier League after gaining only nine points in their remaining nine games — the lowlight being an incredible 4-1 loss to Bournemouth having led with fewer than 30 minutes remaining

Looking at their data in the 2020/21 campaign, missing out on Champions League qualification would be more of a regression to the mean than an implosion, despite the strong position Leicester held just two weeks ago.

Leicester's underlying process has been middling for a team that sits so high in the table, a point which is highlighted perfectly by the sheer proximity of their xGF and xGA trendlines in the graphic above.

Rodgers' men are only eighth on expected points, which assesses the chances a team creates and concedes in each match and simulates the chance of getting each result to estimate the number of points they could expect to get given their performances.

Such is the unpredictability of football, Leicester have outperformed their numbers at both ends of the pitch over a sustained period, scoring 55 goals from 49.2 xGF and conceding 37 goals from 40.4 xGA this term.

As a result, they sit in a higher position than their displays deserve, making a so-called 'collapse' more anticipatory than the actual table would have you believe.

Fox in the box Iheanacho

It would be harsh to credit all of Leicester's overperformance as fortune, though. A reinvigorated Kelechi Iheanacho has clearly been in terrific form when Leicester needed him most.

In the wake of injuries to Harvey Barnes and other creative players, Iheanacho stepped in to fill the void, with Rodgers switching to a front two. The partnership between the Nigerian and Jamie Vardy has been season-saving.

While Vardy has underperformed his xG, the link-up play with his new partner has been incredible, and Iheanacho has rewarded the team with goals.

The pair combined for the FA Cup final-sealing goal on Sunday, but his scoring has not been limited to just one competition. 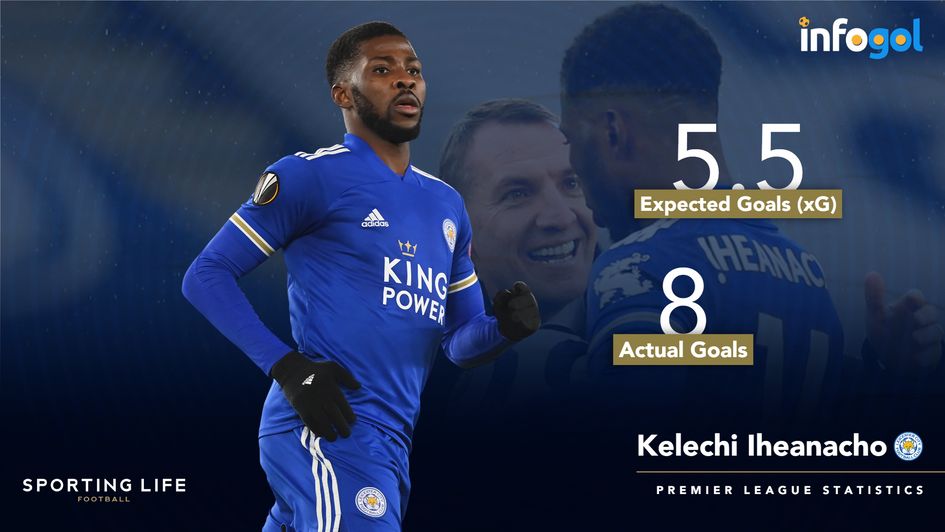 He has scored eight times from 5.5 xG in the Premier League, all eight of which have come since February (3.9 xG). Although that level is unsustainable over time, his ability to get into good scoring positions is a consistent trait the 24-year-old has displayed.

Given the way Iheanacho has seized his opportunity, it's hard to envisage him not being a key player for the Foxes as the league campaign winds down.

The question is whether it will be enough to save Leicester's blushes after allowing their defensive process to slip to a mid-table level recently.

Finishing lower than fourth will be seen — and felt — like another calamitous breakdown, when from a data perspective it will be simply what Leicester deserve.

That made Sunday's FA Cup semi-final against Southampton a pivotal point in Leicester's season. After progressing to the final, missing out on Champions League qualification would be more palatable.

However, given Leicester's upcoming league schedule, they should be able to cling onto a top-four spot. Rodgers' men face West Brom, Crystal Palace, Southampton and Newcastle in their next four Premier League games, three of which are at the King Power.

Those four opponents combine for an average finishing position of 15.8 on Infogol's forecasted table at the end of the season.

That stretch is made more important by their last three fixtures coming against Manchester United, Chelsea and Tottenham to finish off an exhausting campaign.

How they handle the coming weeks, or if it all even matters given the European Super League bombshell, will determine the storyline for the months to come: 'Leicester collapse again' is already firmly on people's lips.

Last season and this might feel eerily similar, but the data tells two very different stories.

Even sixth would be an overachievement. But try telling Leicester fans that.