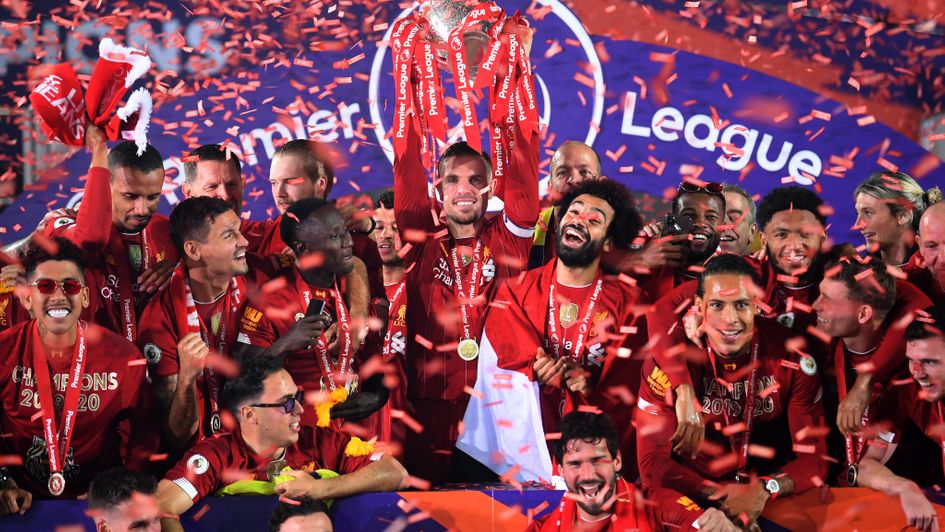 Arsenal, Chelsea, Liverpool, Manchester City, Manchester United and Tottenham have linked up with six European clubs – three from Spain and three from Italy – to create a rival competition to the Champions League.

It is anticipated three more clubs will join the breakaway group as founding members with the new competition, which will begin “as soon as practicable” to eventually feature 20 teams.

A joint statement read: “Twelve of Europe’s leading football clubs have today come together to announce they have agreed to establish a new midweek competition, the Super League, governed by its founding clubs.

“It is anticipated that a further three clubs will join ahead of the inaugural season, which is intended to commence as soon as practicable.”

The timing of the announcement is incendiary coming ahead of an anticipated announcement from UEFA confirming changes to the Champions League format on Monday.

The European governing body is expected to approve an increase from 32 to 36 teams from 2024 with the existing structure of eight groups of four replaced by one league. The format, known as the ‘Swiss model’, would see all teams play 10 games in the first stage with opponents determined by a seeding system.

The statement from the 12 clubs makes clear they do not believe these proposed changes go far enough.

"I'm disgusted with Man United and Liverpool the most."

"The owners of these clubs are imposters."

"It's a criminal act against football fans."

"They are bottle merchants."

The statement continued: "Going forward, the Founding Clubs look forward to holding discussions with UEFA and FIFA to work together in partnership to deliver the best outcomes for the new League and for football as a whole.

"The formation of the Super League comes at a time when the global pandemic has accelerated the instability in the existing European football economic model. Further, for a number of years, the Founding Clubs have had the objective of improving the quality and intensity of existing European competitions throughout each season, and of creating a format for top clubs and players to compete on a regular basis.

"The pandemic has shown that a strategic vision and a sustainable commercial approach are required to enhance value and support for the benefit of the entire European football pyramid. In recent months extensive dialogue has taken place with football stakeholders regarding the future format of European competitions. The Founding Clubs believe the solutions proposed following these talks do not solve fundamental issues, including the need to provide higher-quality matches and additional financial resources for the overall football pyramid.

🤔 Should the 'Big Six' joining the European Super League be expelled from the Premier League and the Football League?

"As soon as practicable after the start of the men’s competition, a corresponding women’s league will also be launched, helping to advance and develop the women’s game.

"The new annual tournament will provide significantly greater economic growth and support for European football via a long-term commitment to uncapped solidarity payments which will grow in line with league revenues. These solidarity payments will be substantially higher than those generated by the current European competition and are expected to be in excess of €10 billion during the course of the initial commitment period of the Clubs.

"In addition, the competition will be built on a sustainable financial foundation with all Founding Clubs signing up to a spending framework. In exchange for their commitment, Founding Clubs will receive an amount of €3.5 billion solely to support their infrastructure investment plans and to offset the impact of the COVID pandemic.

"Florentino Perez, President Real Madrid CF and the first Chairman of the Super League said: “We will help football at every level and take it to its rightful place in the world. Football is the only global sport in the world with more than four billion fans and our responsibility as big clubs is to respond to their desires.”

"Backing the new European league, Andrea Agnelli, Chairman of Juventus and Vice-Chairman of the Super League said: “Our 12 Founder clubs represent billions of fans across the globe and 99 European trophies. We have come together at this critical moment, enabling European competition to be transformed, putting the game we love on a sustainable footing for the long-term future, substantially increasing solidarity, and giving fans and amateur players a regular flow of headline fixtures that will feed their passion for the game while providing them with engaging role models.”

"Joel Glazer, Co-Chairman of Manchester United and Vice-Chairman of the Super League said: “By bringing together the world’s greatest clubs and players to play each other throughout the season, the Super League will open a new chapter for European football, ensuring world-class competition and facilities, and increased financial support for the wider football pyramid.”

A joint statement from UEFA, the Football Associations of England, Spain and Italy, plus the Premier League, LaLiga and Serie A added they remained united in their efforts to “stop this cynical project” and were considering all “judicial and sporting (measures) in order to prevent this happening”.

The statement read: “If this were to happen, we wish to reiterate that we – UEFA, the English FA, RFEF, FIGC, the Premier League, LaLiga, Lega Serie A, but also FIFA and all our member associations – will remain united in our efforts to stop this cynical project, a project that is founded on the self-interest of a few clubs at a time when society needs solidarity more than ever.

“We will consider all measures available to us, at all levels, both judicial and sporting in order to prevent this happening. Football is based on open competitions and sporting merit; it cannot be any other way.

“As previously announced by FIFA and the six Federations, the clubs concerned will be banned from playing in any other competition at domestic, European or world level, and their players could be denied the opportunity to represent their national teams.

“We thank those clubs in other countries, especially the French and German clubs, who have refused to sign up to this. We call on all lovers of football, supporters and politicians, to join us in fighting against such a project if it were to be announced.

“This persistent self-interest of a few has been going on for too long. Enough is enough.”

In a solo statement, the English FA said: “It is clear that this would be damaging to English and European football at all levels and will attack the principles of open competition and sporting merit which are fundamental to competitive sport.

“For new competitions to be formed involving clubs from different associations, approval would be required from the relevant national associations, confederation and/or FIFA.

“We would not provide permission to any competition that would be damaging to English football, and will take any legal and/or regulatory action necessary to protect the broader interests of the game.

“We note FIFA confirmed earlier this year that they and the six confederations would not recognise any such competition and, as such, any player or club involved may not be permitted to participate in any official competition which falls within the auspices of FIFA or their respective confederation.

“The FA will continue to work with UEFA, FIFA and the Premier League to seek to ensure that nothing is approved that has the potential to damage English football. We will work with fans, the Premier League, EFL, PFA and LMA, as well as other stakeholders, at home and abroad, to defend the integrity and future prospects of English football in the best interests of the game.”

The Premier League issued its own strongly worded statement as the news broke on the eve of a meeting where UEFA is expected to rubber-stamp a revamped 36-team Champions League.

“The Premier League condemns any proposal that attacks the principles of open competition and sporting merit which are at the heart of the domestic and European football pyramid,” the league said in a statement.

“Fans of any club in England and across Europe can currently dream that their team may climb to the top and play against the best. We believe that the concept of a European Super League would destroy this dream.

“A European Super League will undermine the appeal of the whole game, and have a deeply damaging impact on the immediate and future prospects of the Premier League and its member clubs, and all those in football who rely on our funding and solidarity to prosper.”

TV presenter and former England striker Gary Lineker tweeted of the Super League reports: “If this is true it will have huge ramifications on the game. Huge.”

On the publication of the Premier League statement, Lineker added: “Don’t panic….alright then, let’s panic.”

The Professional Footballers’ Association said in a statement on Sunday evening that it had “substantial concerns” regarding the proposal and vowed to work with the players and relevant organisations to “represent the game’s best interests and protect the integrity of football”.

Gary Neville, speaking on Sky Sports, labelled the plans “an absolute scandal”, particularly in the midst of the coronavirus pandemic, and called for teams who have signed up to be deducted points, with his former Manchester United team-mate Roy Keane agreeing that it just came down to “money and greed”.

😡 Gary Neville brands the European Super League as a "criminal act against football fans in this country" during this emotionally-charged interview.

You'll agree with every word...pic.twitter.com/UMZAsctU9Y

United boss Ole Gunnar Solskjaer and Arsenal counterpart Mikel Arteta were asked about the matter following their respective matches on Sunday, with both unwilling to comment before knowing the full details.

Leicester manager Brendan Rodgers and Southampton boss Ralph Hasenhuttl were asked about the matter following Sunday evening’s FA Cup semi-final, with the former saying he would prefer to focus on his team’s victory while the latter backed the Premier League stance and said it was “absolutely unacceptable what is going on behind the scenes”.

The European Club Association said “a ‘closed super league model’, to which the media articles refer, would be strongly opposed by the ECA”.

Prime Minister Boris Johnson took to Twitter on Sunday evening to label the proposals “very damaging” and call on clubs to “answer to their fans and the wider footballing community before taking any further steps”.

UEFA’s executive committee meet on Monday and is expected to agree a controversial revamp of the Champions League.

The so-called ‘Swiss model’ will see teams compete in one 36-team league – instead of the current system where 32 sides are split into eight pools of four – and guarantee each club 10 matches on a seeded basis.

The new format, which guarantees clubs four more games than in the current group phase, takes the Champions League from 125 to 225 matches and would create a huge headache for domestic schedulers.

EFL chairman Rick Parry says it would be a “major threat” to the Carabao Cup and the FA also wrote to UEFA to express its concerns.

Fans groups, including those from Manchester United and Arsenal, said in an open letter to ECA chairman and Juventus boss Andrea Agnelli that the plans to restructure the Champions League “present a serious threat to the entire game”.

The letter, signed by 17 fans’ groups from 14 teams whose clubs are in the ECA, including Ajax, Real Madrid, Bayern Munich and Borussia Dortmund, said it was a “blatant power grab” and would “wreck domestic calendars”.

The new format would see the league’s top eight qualify automatically for the last-16 knockout stage, with the teams finishing between ninth and 24th playing off for the remaining eight places.

Extra games would see the Champions League encroach into January – a month usually kept free for domestic club football – while the allocation of two of the extra four places to sides based on previous European performance has also proved controversial.

A team could still qualify for the Champions League based on ‘historic co-efficient’ as long as they did enough domestically to finish in a Europa League or Europa Conference League position.

Discussions over the commercial control of the competition are set to continue in the coming weeks.