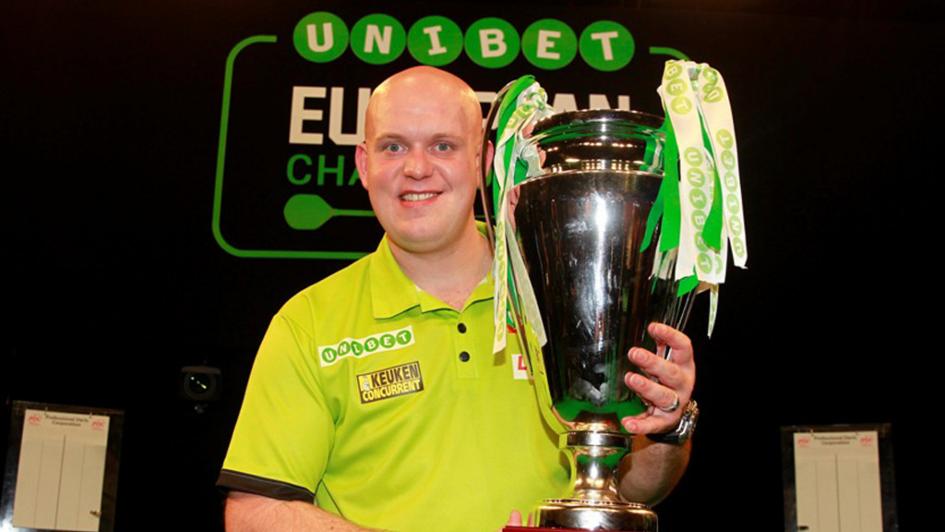 Michael van Gerwen came from 10-7 down to beat Gary Anderson 11-10 in an enthralling Unibet European Championship final in Belgium.

World champion Anderson appeared to have made a decisive move in an epic encounter when he took out 101 to move within a leg of glory.

But Dutchman Van Gerwen then played four superb legs to snatch the title from the brink of defeat.

The reigning champion had earlier missed double 12 to complete a nine-darter in the fourth leg but he went on to claim a 4-3 lead, only for Anderson to reel off four maximums in as many legs, as he took four in a row to pull clear.

Finding himself needing four straight legs himself to avoid defeat, Van Gerwen produced a pair of 14-dart legs and then levelled the match at 10-10 when a ninth maximum of the final helped him to complete a 13-darter.

The title came down to a deciding leg and, when Anderson failed to take out 134, the world number one stepped in and finished off 75 to cap another 14-darter and clinch the title in dramatic fashion.

"Gary was playing fantastic darts and I couldn't find a way to put him under pressure because his scoring power at the right moments was fantastic.

"I was waiting for a mistake and when you get a chance you need to take it with both hands, and that's exactly what I did. I fought for everything but I still don't know where that finish came from.

"Maybe I played the four best legs of my career under this pressure and I'm really happy with that. It's fantastic to win a tournament like this in that way."

Van Gerwen had earlier defeated Dave Chisnall 10-4 in the quarter-finals before an 11-7 win over Peter Wright earned him a place in the final.

In the most exciting of the quarter-finals, Adrian Lewis withstood a brilliant Phil Taylor comeback to triumph 10-9.

Taylor came back from 9-6 down to level and averaged 106.12 in the match but Lewis hit tops to take the deciding leg, only to lose 11-5 to Anderson in the semis.