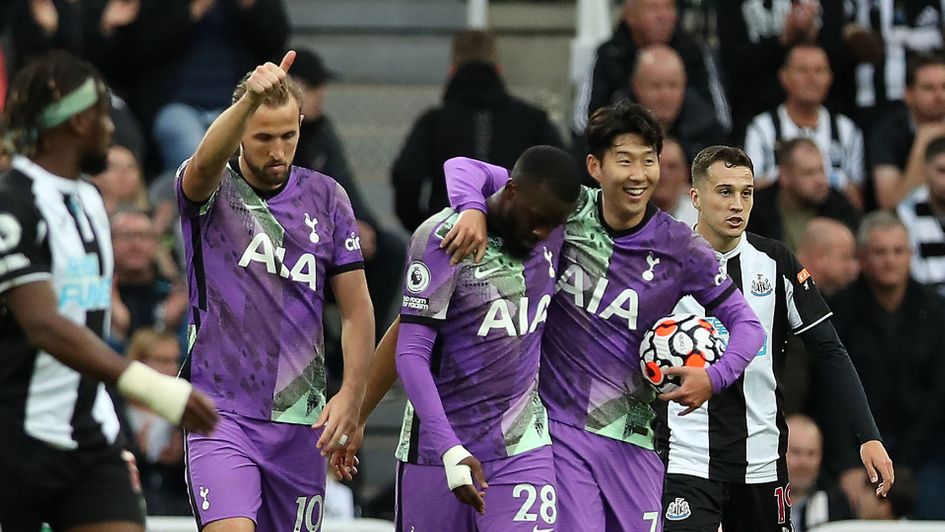 Celebrations for Spurs during their 3-2 win at Newcastle

Indeed, the Tottenham pairing are on the same wavelength to such an extent that they appear destined to surpass all others as the most devastating attacking duo in Premier League history.

Kane's assist for Son in Sunday’s 3-2 win over Newcastle United means only Didier Drogba and Frank Lampard have combined for more (36) in Premier League history, with Kane and Son just one more goal away from equalling their record. Their return as a pairing speaks for itself.

This, however, was the first time this season they have combined in the Premier League.

Nuno Espirito Santo has so far struggled to get the most out of his dynamic duo, but there are growing signs that Kane and Son are giving Spurs attacking purpose again. Newcastle found that out to their cost.

Son made more key passes (five) than anyone else on the pitch while Kane created two ‘big chances.’

Nuno’s approach has been described as one-dimensional by those who view his conservative ideas in contravention of Tottenham’s core values as a club that favours free-flowing football, but Kane and Son, when they are in form, offer so much.

It should be noted that while Kane and Son linked up throughout the match at St James’ Park, they weren’t deployed as a front two like they were many times by Jose Mourinho.

⚪️ Harry Kane now turns provider as he sets up Heung-Min Son for his fourth goal of the campaign #THFC #NEWTOT pic.twitter.com/5pOvKAUX1d

Instead, Son was asked to maintain a position on the left side with Tanguy Ndombele pushed up in behind Kane.

Like Kane and Son as his de facto front two, there are suggestions Nuno has finally found a way to harness his most talented central midfield.

Has Nuno found a system to suit Ndombele?

With Ndombele liberated to make bursting runs in behind, the sight of Kane dropping deep wasn’t such a problem.

In fact, this opened up space for Son and Lucas Moura as well as Ndombele to exploit - no player on the pitch made more dribbles than Moura (five). This made life difficult for Newcastle who didn’t know who to track.

One of Tottenham’s biggest problems under Nuno has been the space between the midfield and attack, but by doing this they gave themselves a platform higher up the pitch. This allowed them to press high and build pressure with possession on the edge of the opposition box.

🤔 Will this open the floodgates... pic.twitter.com/aAqDctXDvw

Moura also played his part, drifting inside off the right side to commit defenders and open up space in behind - see the build-up to Tottenham’s third goal.

This isn’t to say Tottenham didn’t revert to their conservative default for certain stages of the match.

Indeed, the away side maintained their shape and invited Newcastle on top of them towards the end of the second half, but Ndombele’s duty, even in these phases, was to lead the high press.

Nuno and Spurs are learning

Lessons have seemingly been learned from a dismal September, when Spurs suffered damaging defeats to Crystal Palace, Chelsea and Arsenal.

In all three matches, Nuno was criticised for being too cautious with his team selection, particularly with regards to his midfield unit.

Against Palace, for instance, Nuno opted for a midfield trio of Pierre-Emile Hojbjerg, Oliver Skipp and Harry Winks which gave Tottenham no dynamism.

With Hojberg and Skipp deployed at the base of the midfield on Sunday, Spurs still had structure, but it didn’t come at the sacrifice of drive and creativity.

A subtle tactical shift from the 4-3-1-2 shape used by Nuno during the first two months of the season to a 4-2-3-1 formation also helped, if only because it places Ndombele in a more advanced area of the pitch where he can have a greater influence.

Kane and Son, who have more support around them, also benefit from this change.

Of course, Tottenham will face tougher tests than the one they faced from a Newcastle United side still waiting for their first Premier League win of the season - see next week’s away match at West Ham - but Nuno appears to have a better grasp of the qualities and traits of his players than he did just a few weeks ago, Kane and Son included.