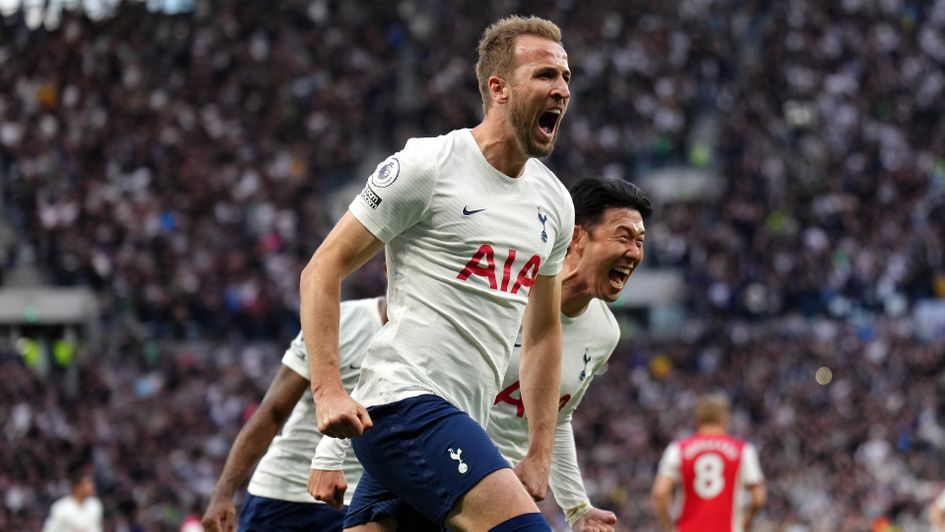 Tottenham kept their Champions League hopes alive as they put 10-man Arsenal to the sword with a 3-0 victory in a pulsating North London derby.

Victory for the Gunners would have booked them a top-four spot, but Antonio Conte’s men were never going to let that happen on their own patch.

Spurs’ motto emblazoned in the stands before the game was ‘Dare, Dream, Do’ and they delivered in style as Harry Kane continued his love affair with this fixture by scoring twice and partner in crime Son Heung-min added another.

Son adds a third in the second half as Spurs breeze to victory, closing the gap to one point. pic.twitter.com/Qd8HXKPpRP

Kane’s brace, which took him to 13 north London derby goals in just 17 games, came in the space of a 15-minute first-half spell in which Arsenal threw the game away.

They conceded a needless penalty in the 22nd minute, which Kane emphatically converted, then Rob Holding picked up a second yellow card before the England captain doubled the lead four minutes later.

Son’s goal, which took him to 21 for the season, came early in the second half and killed the game as the Spurs fans enjoyed their evening.

Despite the chastening night, Champions League football next season is still in Arsenal’s hands as they remain a point above Tottenham with two games left and, if they beat Newcastle and Everton, they will be assured of a return to the top tier of European club competition for the first time since 2017.

This was the first time this fixture had been played at Tottenham’s new stadium in front of a full crowd and the atmosphere did not disappoint as a frantic opening 15 minutes was greeted with a wall of noise.

The tone was set for an ill-tempered affair early on, with both teams guilty of cynical challenges, so it was little surprise that another foul led to a decisive moment in the game.

Dejan Kulusevski cut inside and sent a cross in which found its way to the back post where Cedric Soares clumsily barged Son over, with referee Paul Tierney pointing to the spot.

The result from the penalty was a formality as Kane sent Aaron Ramsdale the wrong way, sending the home crowd into euphoria and continuing the striker’s excellent scoring record against the Gunners.

Arsenal’s indiscipline has been a key feature of Mikel Arteta’s reign and again it reared its ugly head as Holding let his side down in the 33rd minute.

Rob Holding catches Son and gets a second yellow! pic.twitter.com/Y0j6VHvPfd

Having been booked seven minutes earlier for a cynical foul on Son, he did not learn his lesson as he blatantly obstructed the South Korean, barging him with his shoulder, and was rightly given his marching orders.

It was the 13th red card of Arteta’s time in charge, five more than any other Premier League team in that period.

Spurs sensed blood and took further control of the game four minutes later by going 2-0 up.

Rodrigo Bentancur got to Son’s corner first, flicking it on to the back post where Kane stooped low to head home from close range.

The hosts wanted more and Kane, eyeing a first north London derby hat-trick, had a goalbound shot blocked and Emerson Royal scooped over at the far post when it seemed easier to score.

Any thoughts Tottenham might ease off in the second half were put to bed within two minutes as Son made it three.

Kane turned Gabriel, who was able to recover and get a toe to the ball, but could only poke it to Son, who cleverly clipped the ball home.

Spurs threatened to run riot and really embarrass their rivals and only a couple of smart stops from Ramsdale prevented that.

First, the England goalkeeper got down to keep out Emerson’s header and then he palmed away a swerving Kane shot.

Son could have moved level with Mohamed Salah in the Golden Boot race on 22 goals but he clipped over from Ryan Sessegnon’s centre when the goal was gaping.

With less than 72 hours until they are next in action against Burnley at 12pm on Sunday, Conte’s men played within themselves for the final quarter of the game and saw a famous night out in style.