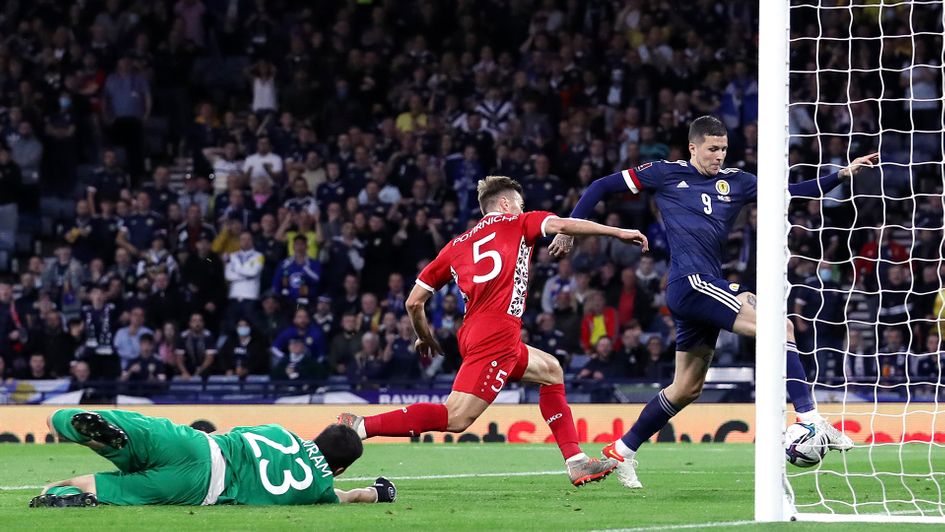 Lyndon Dykes’ early counter gave Scotland a 1-0 win over Moldova in their World Cup qualifier at Hampden but the victory should have been more emphatic.

In front of 40,869 fans a close-range finish by the QPR striker against the Group F minnows proved to be enough for three points but the Scots missed several chances to make the night more comfortable.

The win, however, sets Scotland up for Tuesday’s crucial match in Austria.

Steve Clarke’s side have eight points from five games and next face the Austrians who lost 5-2 to Israel, who are also in the mix for second place and a play-off spot, as runaway leaders Denmark look to be cruising to automatic qualification for Qatar next year.

It is now crunch time for Scotland who have to find a statement result in Vienna to make their mark on the group.

Clarke had been criticised after the 2-0 defeat away to the Danes in midweek, more so for the first-half performance than the result.

A squad that was depleted by injuries and Covid issues was replenished with full-back Nathan Patterson, 19, and striker Kevin Nisbet making their first starts while defender Jack Hendry, midfielders John McGinn and Ryan Christie and Dykes also returned.

Roberto Bordin’s Moldova side were pushed back from the kick-off and an early shot from Patterson flew wide.

The Rangers defender, though, was more accurate when after passing the ball to Nisbet, he raced on to take the return pass and when his shot was parried by keeper Cristian Avram, Dykes was on hand to tap in from a yard out.

The home side and the fans could relax a little.

Billy Gilmour was pulling the strings and his pass to Dykes was moved on to Nesbit inside the Moldova box but the Hibs striker was too slow to react and was dispossessed.

Then, in the 27th minute, Kieran Tierney’s header from Gilmour’s corner was tipped over the bar by Avram, the second corner coming to nothing.

Moments later, a through ball from Ryan Christie found captain Andy Robertson but he blazed his shot over the bar before Tierney had two drives, one either side of an effort from Gilmour, all saved by Avram.

Moldova had barely threatened but in a 38th-minute break striker Mihail Ghecev came close with a powerful drive from 25 yards which sped past Craig Gordon’s left-hand post.

Scotland kept the pressure up at the start of the second half and defender Grant Hanley headed over another perfectly delivered ball by Gilmour.

While only one goal separated the sides Moldova were always in it and Gordon had to deal with a decent long-range drive from substitute Cristian Dros.

That spurred the Scots into action but Gilmour failed to convert from eight yards after working a neat one-two with Nisbet.

Callum McGregor and Che Adams came on for McGinn and Nisbet and Adams soon sent in a drive which escaped Avram’s right-hand post, just before Kenny McLean and Liam Cooper took over from Gilmour and Robertson.

The match fell flat but Scotland missed another chance after David Turnbull had come on for Dykes, when Christie drove high over the bar. Scotland will have to be more clinical in Austria.