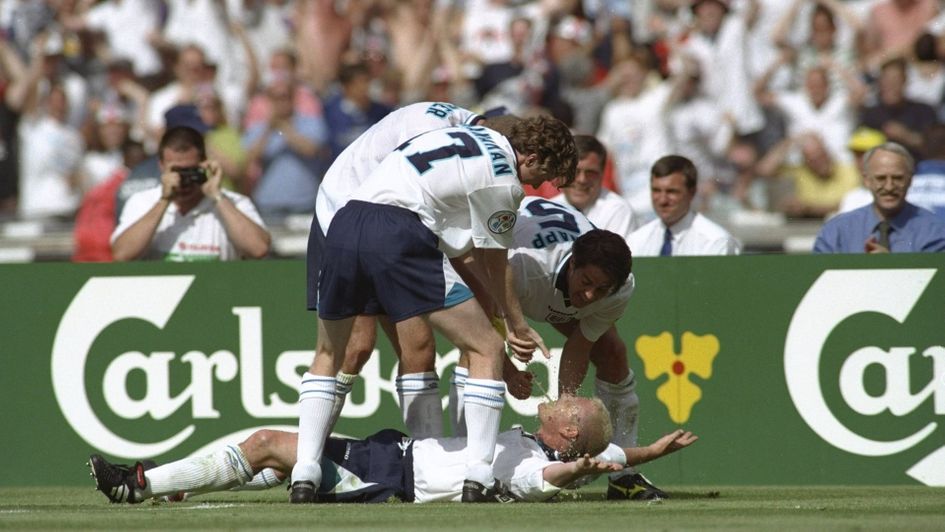 Paul Gascoigne celebrating after scoring one of England's greatest goals

Michael Beardmore looks at the top five memorable goals of Euro 96 the last time the Euros were in England, using Infogol's expected goals (xG) model to provide the percentage chance of each being scored.

One benefit to being over 35 – and there aren’t many benefits – is that you don’t need to rely on re-runs and highlight reels to remember Euro '96.

We’re all guilty of seeing the past through rose-tinted glasses but a tournament on home soil, the seminal Three Lions song and Gazza in his pomp – it doesn’t really get any better, does it?

Oh, and you got to shout a rude word at the top of your voice in the school playground, with the excuse you were recreating the England-Germany semi-final. Good old Stefan.

The dentist’s chair had never been so popular, the Czechs bounced and, in the end, the current England boss ended up advertising pizzas. Oh, and the Germans won. Again. What a time to be alive.

It was perhaps to many outside the British Isles, a tournament just like any other – moments of quality, the odd thrilling game, punctuated by plenty of drab affairs.

But the goals. Oh, the goals. Rarely has a tournament produced such beautiful, memorable and vital goals as Euro '96 did.

Where to start? With the tournament’s Golden Boot winner, of course.

And with the beauty of Expected Goals (xG) data - not even a twinkle in Fantasy Football nerd Statto's eye in 1996 - we can cast a fresh glance over just how unlikely, and impressive, each strike was.

What is Expected Goals (xG)? 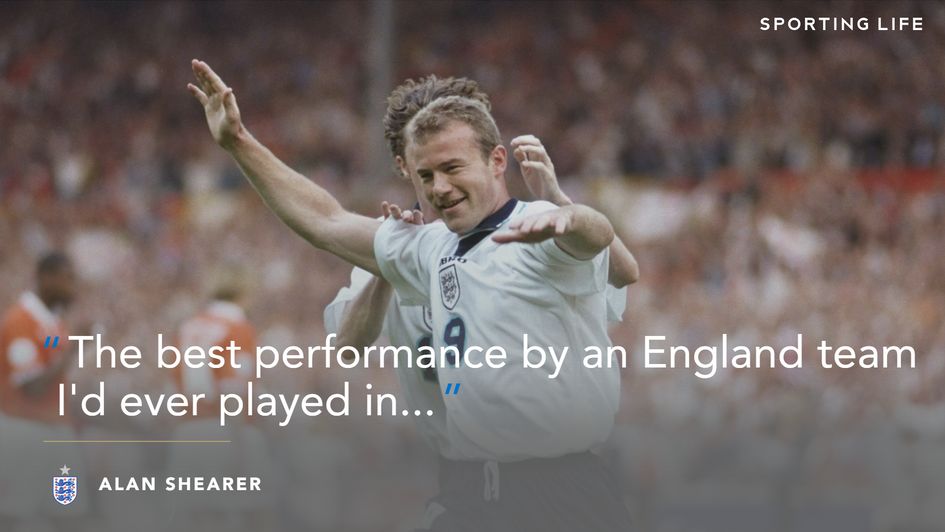 Alan Shearer on England's performance against Holland in Euro '96

There might be one - that unforgettable 5-1 win over Germany in Munich - that has bettered it since. The 3-2 win in Spain in the Nations League is up there. And we've handed out a couple of pannings to Croatia, who have hurt us equally in return.

But, for an England fan in the 1990s, the humbling of the Netherlands - the masters of Total Football totally out-footballed - was as good as it got. Given the failings that preceded it, there wasn't a lot of competition to be honest.

It was England's third goal that will resonate long in the memory - a mini-replica of the famed Carlos Alberto strike for Brazil in the 1970 World Cup final.

After receiving a cutback from Paul Gascoigne, Teddy Sheringham feigned a shot before squaring it to an unmarked Shearer, who blasted the ball into the top corner. Expected Goals (xG) data says the net had a 39% chance of rippling.

"If I shoot there, I've got a six in ten chance of scoring," Sheringham stated in a recent interview. "If I roll the ball to Shearer, he's got an eight in ten chance. That is instinctively weighed up in a split second."

Teddy is obviously a proponent of xG. However, his probabilities need a bit of work! Four out of ten, Edward!

This is simply brilliant from England!

A wonderful team move culminates in Sheringham laying the ball off to Shearer... he nearly takes the net off!#ITVFootball #Euro96Relived pic.twitter.com/KmJAFlnVKg

In any international tournament, the goal that wins the trophy is generally ingrained in the mind, and it would be remiss of us not to mention Euro 96's decisive strike.

Not necessarily for its quality but for its place in history - it was the first ever 'Golden Goal' to decide a tournament.

For whatever reason, in their infinite wisdom, international football's chiefs had introduced the initiative in order to make extra time less boring, to encourage both teams to seek a winning goal that would decide the game there and then.

Of course, it generally achieved the opposite - sides were so terrified of losing the game in a split second with no recourse to recover that extra-time periods became even more sterile and defensive.

The experiment was abandoned within a decade but not before both Euro '96 and Euro 2000 had been decided by it. It wrote the names of Oliver Bierhoff and David Trezeguet into the record books.

Bierhoff's impact as a substitute in the Euro '96 final was swift, scoring Germany's headed equaliser against the Czech Republic, sending the match to extra time.

Then his slightly deflected snap shot (5% chance) in the fifth minute of extra time surprised Czech keeper Petr Kouba, who fumbled what looked like an easy save into the far corner of his net as Germany, inevitably, triumphed again.

"He should’ve held on to it, but that’s not of interest to me," said Bierhoff in later years, with that typically understated German humour. 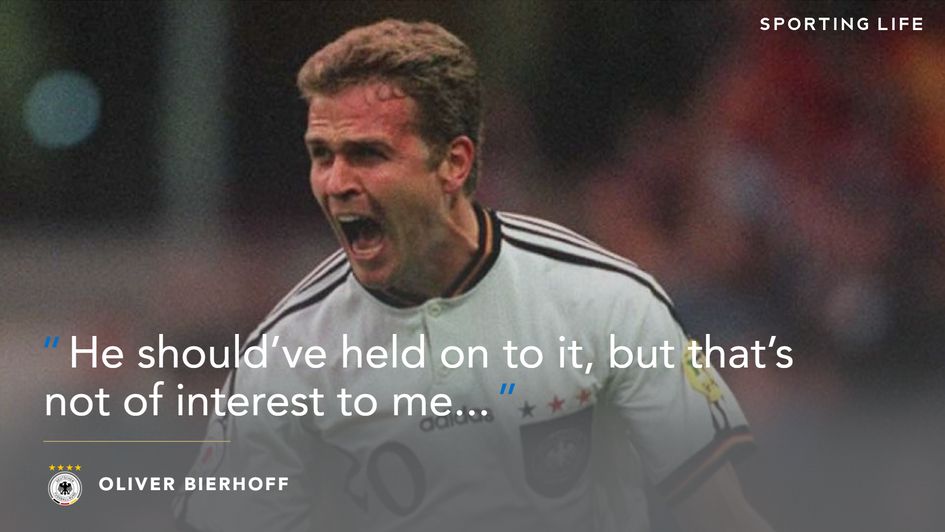 Oliver Bierhoff on the goalkeeping for his famous golden goal winner

For practically the entire decade of the 1990s, Peter Schmeichel was almost flawless. The supreme stopper won virtually every honour going - team and individual - with Manchester United, and even helped Denmark to an incredible Euro '92 triumph.

Even if you didn't like the Red Devils - and this was a period where virtually everyone, their fans apart, didn't - it was hard to detest the Great Dane, so sensational was he between the sticks.

In fact, he was so good that his worst moments were not really even errors, they were just memorable occasions when he was beaten by a stroke of genius - that Phillipe Albert chip for Newcastle, for example.

And speaking of chips, Davor Suker had shown the Toon's favourite Belgian how it was done just a few months before, producing an unforgettable lob during Croatia's 3-0 group-stage win that practically ended Denmark's defence of the title.

At 2-0 down, Schmeichel had ventured upfield for a late corner but was comfortably back in his area by the time Suker arrowed in from the left, having sublimely brought Aljosa Asanovic's sumptuous cross-field pass under his spell.

Expected Goals (xG) analysis tells us Suker's lob only had a 3% chance of finding the net - but find the net it did, as rival fans of United struggled to stifle their giggles. 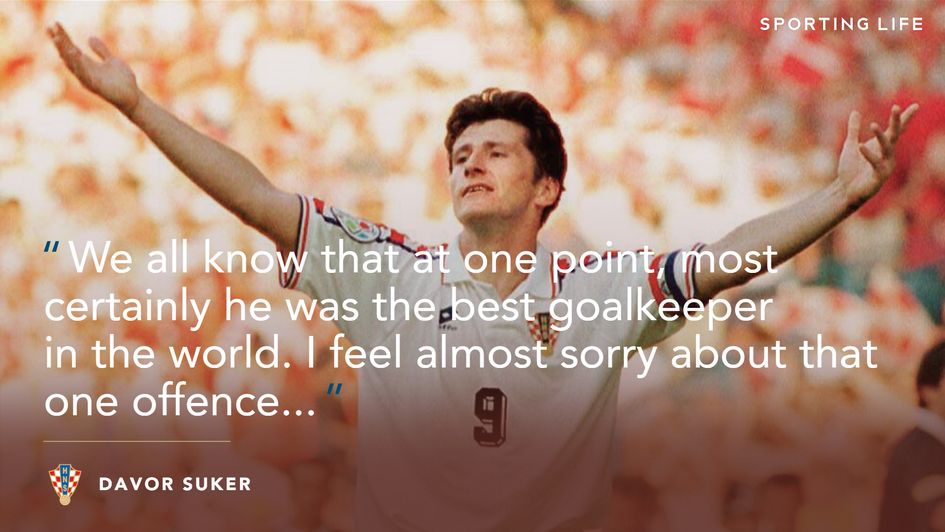 We love xG here at Sporting Life - it's an incredibly valuable metric that measures a team's performance not just over one game but over a length of time, and it's a priceless asset for analysts, tipsters and punters alike.

However, when it throws up Gazza's iconic goal against Scotland as being a 33% chance of going in, even we have to hold our hands up and say 'hey, it ain't flawless'.

Of course, xG only analyses the position where the ball was struck, not the build-up to the goal or other extraneous factors.

It's fair to say that when Gazza first picked up Darren Anderton's lofted through ball, with Colin Hendry to beat, a goal was less likely than 33%. Even after that dazzling left-footed chip over the defender, the right-footed volley was still difficult.

What a moment for Gazza and England!

But, still just seconds, remember, after David Seaman had saved Gary McAllister's penalty at the other end to keep England's lead intact, Gazza dispatched said volley to seal victory over the Auld Enemy at a packed Wembley Stadium.

His instinctive genius was apparent in both his goal and his celebration, quickly pointing out a water bottle to execute the infamous “dentist’s chair”, mocking the pre-tournament drinking session that had haunted England in the tournament's build-up. 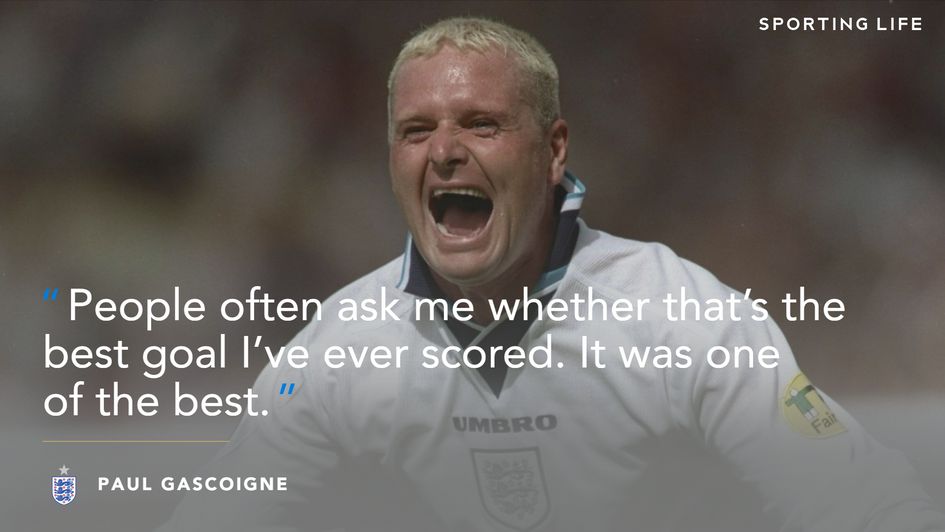 Paul Gascoigne on "that" goal against Scotland

As good as Gazza's goal was - and it will always win the vote on these shores at least - the crown for Euro '96 goes elsewhere and for sheer ingenuity, improvisation and impudence, it's hard to argue.

Unlike the Panenka penalty, the Cruyff turn or various other footballing inventions named after their owners, the 'Pob lob' never quite spawned the succession of imitators it deserved.

On the world stage, there has never been a finish quite like the scooped, lifting-a-tennis-ball-off-the-floor-with-your-racquet, type effort that the Czech Republic's Karel Poborsky used to stun Portugal in the quarter-finals at Villa Park.

If the xG of 0.33 for Gazza's effort was perhaps harshly unreflective, then the figure of 0.02 barely does Poborsky's cheeky chip justice - it was a one in a million strike we have never really seen the like of again. 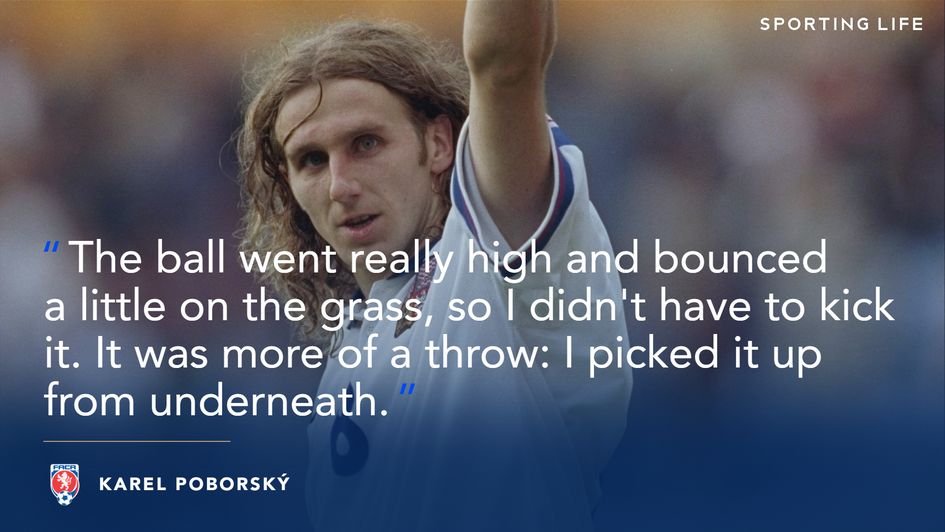 Karel Poborsky on his lob against Portugal at Euro '96

"I'd never played 'strength' football; I have always played technical football and I have always chosen technical solutions, which is perhaps a little unexpected for goalkeepers. It was only a question of whether it would go into the net after it bounced, and luckily it did."

The goal helped the Czechs on their way to the final and earned Poborsky a move to Manchester United, where he never quite recreated that magic, even though he had Schmeichel to practice his chips on in training.