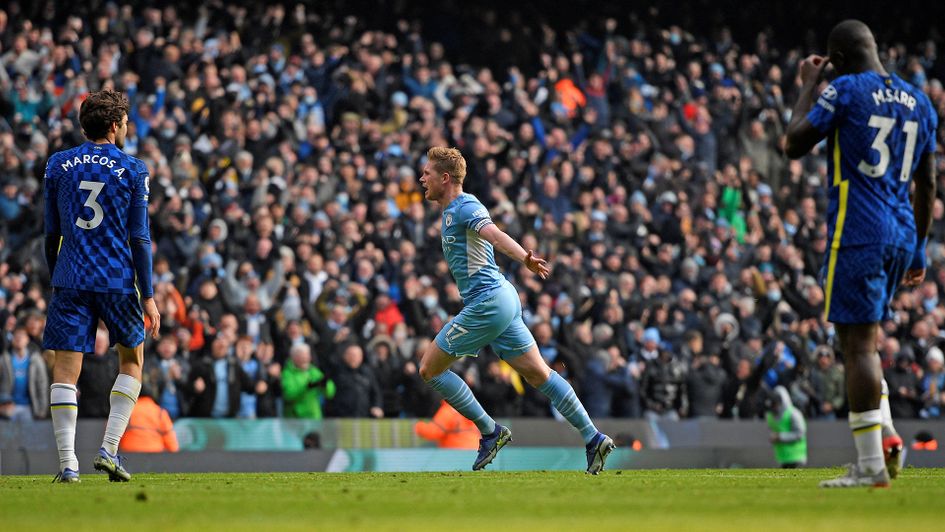 The Belgian playmaker, who had an unhappy spell at Chelsea early in his career, curled beyond Kepa Arrizabalaga from distance to settle a tight contest at the Etihad Stadium with 20 minutes remaining.

It was a moment of magic worthy of winning any game but was the least City deserved having dominated against the side that beat them in last season’s Champions League final.

The win ensured a double for Pep Guardiola’s side over Chelsea this term and possibly ended the Londoners’ title chances. Third-placed Liverpool, 14 points behind but with two games in hand, may now be the only side that could realistically hope to deny City a fourth crown in five years, but it looks a tall order.

City made six changes from the side that beat Swindon in the FA Cup and, despite all their recent problems after a Covid-19 outbreak, produced a thoroughly professional performance.

Yet they were made to work hard as, with Chelsea playing deep, they were unable to create many clear-cut chances despite applying near relentless pressure.

John Stones headed at Kepa having remained up front following a corner early on and Raheem Sterling consistently troubled Marcos Alonso, but the home side were met with stubborn defence.

Judging by Thomas Tuchel’s angry reactions on the touchline to most of Chelsea’s work, sitting back had probably not been the initial gameplan, but something imposed on them by City’s dominance.

Despite that, they still had one of the best openings of the first half when Christian Pulisic launched a rare counter-attack but Romelu Lukaku spurned a shooting chance attempting to tee up an offside Hakim Ziyech.

City did not go close again until just before the interval when De Bruyne dispossessed Mateo Kovacic just outside the area. The ball rolled invitingly to Jack Grealish but, after taking a touch, the £100million man’s attempt to lift over Kepa struck the keeper and rolled wide.

Pep Guardiola's side move 13 points clear at the top of the Premier League table. pic.twitter.com/QAFMMMJPXK

The second half began at a much livelier tempo, with Chelsea perhaps realising the onus was on them to try something different.

That allowed the game to open up and both De Bruyne and Grealish whipped dangerous balls into the Chelsea box after getting behind the defence.

Between those chances, Chelsea went close as Kovacic played Lukaku through but the former Manchester United striker was thwarted by a fine Ederson save and Ziyech fired the rebound over.

Sterling had strong appeals for a penalty after being clipped in the area but the flag was raised for an offside in the build-up.

De Bruyne brought a save from Kepa from a free-kick just after the hour and Sterling had a good effort when he shot across goal from the right.

Despite City’s superiority, it still took some De Bruyne brilliance to finally break the deadlock.

De Bruyne picked up possession midway inside the Chelsea half and skipped away from a crude attempt to stop him by N’Golo Kante. That gave him space to run and he made the most of it as he charged to the edge of the area before curling a fine shot beyond Kepa.

It proved the killer blow with City comfortably playing out the closing minutes to claim a potentially decisive win.

Another strong performance from the Manchester City midfielder. pic.twitter.com/oVHwnn6z5b