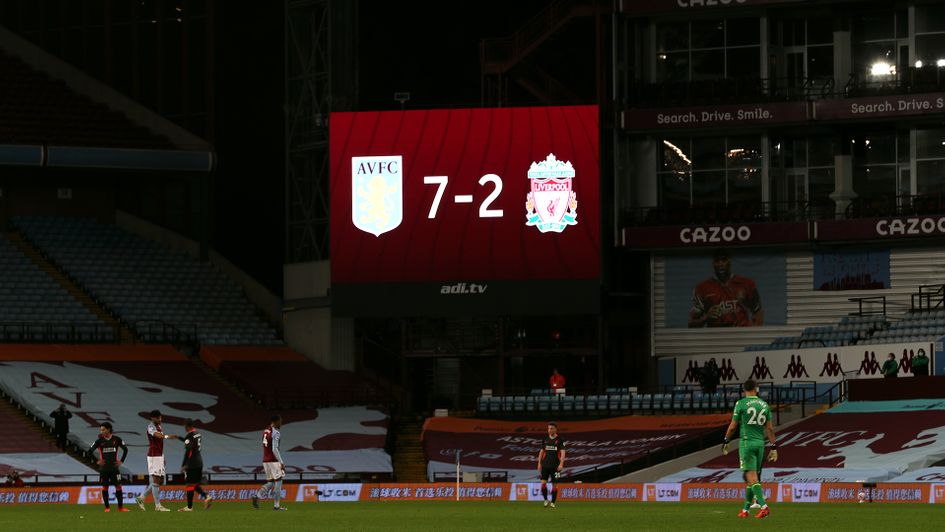 The hosts enjoyed a night to remember at Villa Park

Ollie Watkins scored a first-half hat-trick as Aston Villa brought champions Liverpool’s 100 per cent start to the Premier League season to a shuddering halt with a stunning 7-2 win at Villa Park.

Watkins opened the scoring in the fourth minute following a mistake by Reds goalkeeper Adrian and doubled the hosts’ lead with a fine 22nd-minute strike.

Mohamed Salah replied just after the half hour mark, only for John McGinn to swiftly make it 3-1 and Villa never looked back as Watkins then headed in his third in the 39th minute.

Former Everton man Ross Barkley subsequently deepened Liverpool’s misery 10 minutes into the second half as he marked his Villa debut with a goal and, after Salah pulled another back, Jack Grealish then added two more for the hosts as Liverpool were condemned to a truly embarrassing defeat.

With three wins from three games, Dean Smith’s Villa are up to second place in the table, level on points with Liverpool – who have played four matches – plus Leicester and Arsenal.

The quartet are three points behind Liverpool’s Merseyside rivals Everton, who Jurgen Klopp’s men face at Goodison Park in their next match on October 17.

Goalkeeper Adrian was brought into the Liverpool starting line-up after Alisson Becker suffered a shoulder injury in training on Saturday.

And the Spaniard made a nightmare start as his poor attempt at a pass was pounced upon in the Liverpool box by Grealish, who laid the ball to Watkins for a simple finish.

🙈 This was Adrian's fifth error directly leading to opposition goals in 21 games for Liverpool in all comps.

Four minutes later Barkley, making his Villa bow following his arrival on loan from Chelsea, was fed by Grealish but put the ball wide from a great position.

Liverpool started to exert some pressure, with Emiliano Martinez twice blocking efforts Roberto Firmino, but Villa were soon back on the front foot and doubled their advantage when Watkins, again set up by Grealish, cut inside Joe Gomez and fired past Adrian into the top corner.

Martinez saved a couple of Diogo Jota efforts and Barkley then went close to making it 3-0 before Liverpool reduced the deficit in the 33rd minute as the ball came to Salah in the box and he cracked it in.

But within moments the visitors had conceded again, McGinn’s volley going past Adrian via a deflection off Virgil Van Dijk.

And they were left shell-shocked again four minutes later as Watkins completed his treble by heading home Trezeguet’s cross, the effort standing after a VAR check for offside.

Barkley then got his debut goal in the 55th minute, hitting a shot from outside the box that flew in off Trent Alexander-Arnold, with Grealish again the provider.

😲 It's only the fifth time ever - and first since September 2017 (v Man City) - that Liverpool have conceded five goals in a Premier League game.

Salah fired in at the other end five minutes later to make it 5-2, but Villa were not finished, with Grealish adding a brace.

His first came in the 66th minute, another goal involving a deflection as the Villa skipper’s shot hit Fabinho en route to the net.

Watkins was then denied by Adrian, before Grealish burst clear of the Liverpool defence as he latched onto a McGinn pass and calmly tucked the ball past Adrian.

Things almost got even worse for Liverpool with five minutes of normal time to go as Watkins’ sent a shot against the bar, but Villa had already sealed an emphatic win over the Premier League champions to cap a day of shocks in the Premier League.

🤣 Ollie Watkins scored a perfect hat-trick inside 40 minutes against Liverpool...but is kicking himself for not scoring more! #AVFC #ASTLIV pic.twitter.com/QqAAaFVCEj