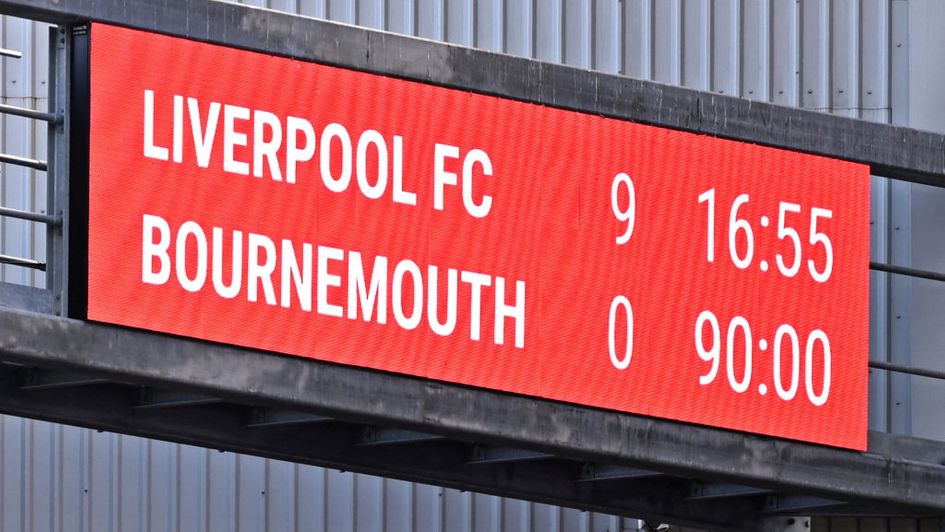 Liverpool equalled the biggest win in Premier League history as Roberto Firmino and Luis Diaz both grabbed braces in a 9-0 annihilation of promoted Bournemouth.

Scott Parker warned of a backlash and his Bournemouth side could do nothing to prevent an Anfield humiliation, with Liverpool recording their first Premier League win of the season in record-equalling fashion.

The Cherries join Southampton and Ipswich in suffering a 9-0 defeat in the competition.

Firmino then provided the assist for Harvey Elliott’s first Premier League goal – a fizzing strike from distance that would have been goal of the day was it not for the Trent Alexander-Arnold stunner that followed.

The Brazil forward set up that goal and celebrated one of his own soon after when turning in a deflected cross – his first league goal at Anfield since December 2020.

Virgil van Dijk powered home Liverpool’s fifth on the stroke of half-time, with Chris Mepham’s own goal providing a gut punch for the Cherries at the start of the second half.

Firmino grabbed a second of the afternoon before leaving to a standing ovation.

The goals did not stop there, though, as Fabio Carvalho scored his first for the club and Diaz grabbed his second, but calls for a 10th went unanswered.

xG Explained: What is Expected Goals?

Who else has scored nine goals in the Premier League?

Here, we look at the four previous occasions when teams have scored nine goals in a Premier League game.

Southampton had Ryan Bertrand sent off for a studs-up challenge on Ayoze Perez in the build-up to the opening goal, setting the tone for the night. Ben Chilwell got that goal in the 10th minute and Perez went on to complete a hat-trick. Jamie Vardy also got a treble – wrapping it up with a spot-kick in added time. Youri Tielemans and James Maddison also found the target.

Andy Cole led the way with five goals, with Mark Hughes (two), Paul Ince and Roy Keane also netting for United against an Ipswich team who finished bottom at the end of the season.