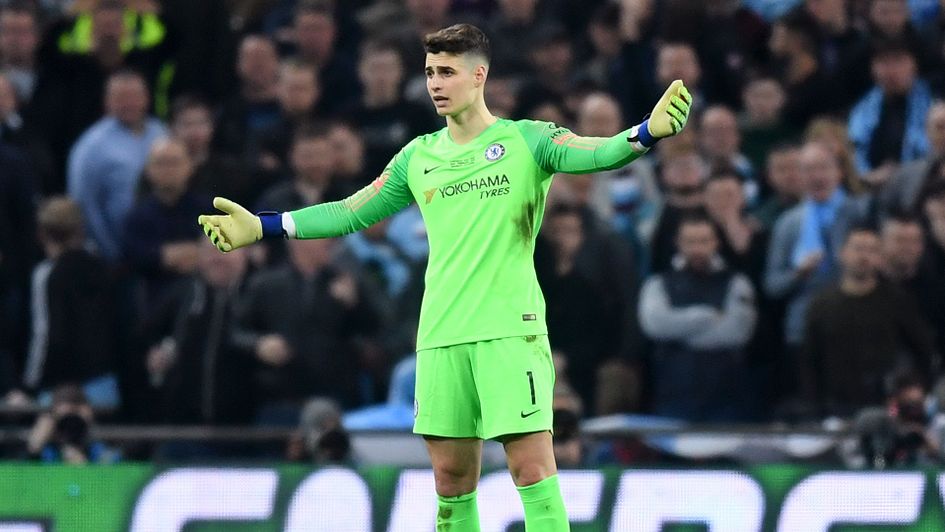 Chelsea fine keeper Kepa Arrizabalaga for refusing to be substituted

Chelsea goalkeeper Kepa Arrizabalaga has been fined one week's wages and admitted he made a "big mistake" after refusing to be substituted during Sunday's Carabao Cup final.

Kepa, who twice required treatment in extra-time at Wembley, waved away a substitution before Manchester City won the shootout and lifted the trophy.

Kepa and Blues manager Maurizio Sarri insisted it was a misunderstanding, but the club announced the 24-year-old would be fined one week's wages, which would be donated to the Chelsea Foundation.

Kepa has admitted he had handled the situation poorly and has apologised after remaining on the field when Sarri was attempting to send on Willy Caballero as a replacement.

"I have thought a lot more about yesterday's events. Although there was a misunderstanding, on reflection, I made a big mistake with how I handled the situation," said Kepa.

"I wanted to take the time today to apologise fully and in person to the coach, to Willy, my team-mates and to the club. I have done this and now I want to offer the same apology to the fans.

"I will learn from this episode and will accept any punishment or discipline the club decides is appropriate."

Sarri said: "Kepa and I have spoken about the incident. It was a good conversation.

"There was a misunderstanding yesterday but he realises he made a big mistake in the way he reacted. He has apologised to me, his team-mates and the club.

"It is up to the club if they want to discipline him according to the club rules, but for me this matter is now closed.

"The team performance as a whole was extremely positive and it is a shame to see how this incident has overshadowed our efforts in what was a very competitive cup final. Everyone's focus is now on the next game and we must all now put this behind us."

Chelsea return to action in the Premier League on Wednesday night, when they host Tottenham.

Sarri will face the media at his pre-match press conference on Tuesday afternoon.