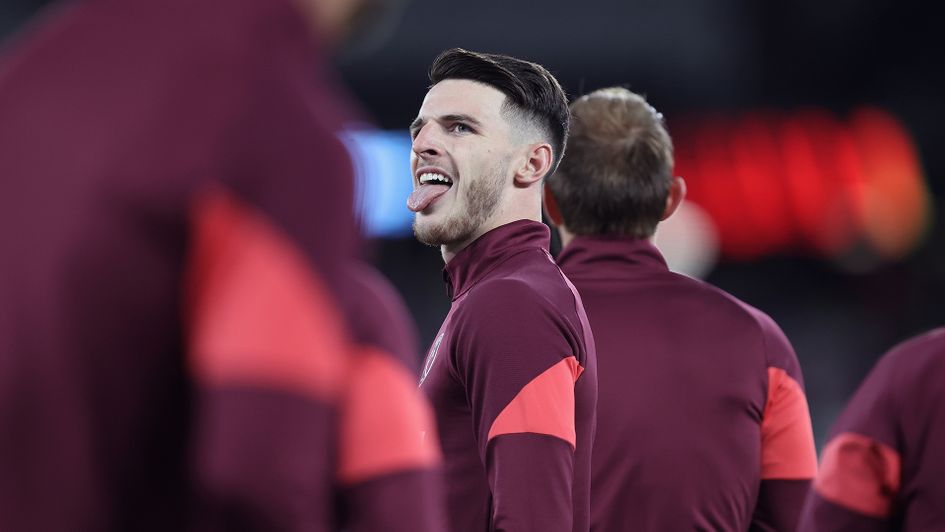 Declan Rice has been a star for West Ham

Declan Rice faces the champions in a top-four battle on Sunday. It could be a sign of things to come: maintain their excellent start and West Ham may find themselves in the Champions League next season.

And if not, then Rice could be in the competition anyway.

If he has carried West Ham further than most anticipated, he has done it literally. Driving runs have become a feature of his play. This season, Rice is the Premier League table topper. His progressive carrying distance – or how far he has taken the ball forward – of 2366 metres is better than anyone else’s.

He faces his closest rival, Manchester City’s Aymeric Laporte, at the weekend.

And in itself, that is revealing. Because defenders are usually unmarked and start off further from goal, they often lead this particular league.

In 2019-20, Harry Maguire, a centre-back who likes to bring the ball out from the back, led the way with 8321 metres. Last season, Leeds right-back Luke Ayling (8246) came first, followed by centre-backs Ruben Dias and Maguire. Now three of the top four are City defenders, in Laporte, Dias and Joao Cancelo.

Six of the top 12 are centre-backs and two, Cancelo and Tino Livramento, are full-backs. Two of the remaining four are professional dribblers, in Jack Grealish, who came second in this chart in 2019-20 and sixth last year, and Allan Saint-Maximin.

That leaves Bernardo Silva and Rice.

And in the West Ham man’s case, it shows he has added another dimension to his game. He finished 47th for progressive carrying distance in 2019-20 and if many of those ahead of him were either defenders or wingers, who operate in less crowded areas of the pitch, central midfielders who took the ball further included Davy Propper and Dani Ceballos, neither famous for his dribbling.

Last season, Rice climbed the standings to 26th: among those who usually played in the centre of midfield, he was behind only Silva, Granit Xhaka, Jordan Henderson and Pierre-Emile Hojbjerg. 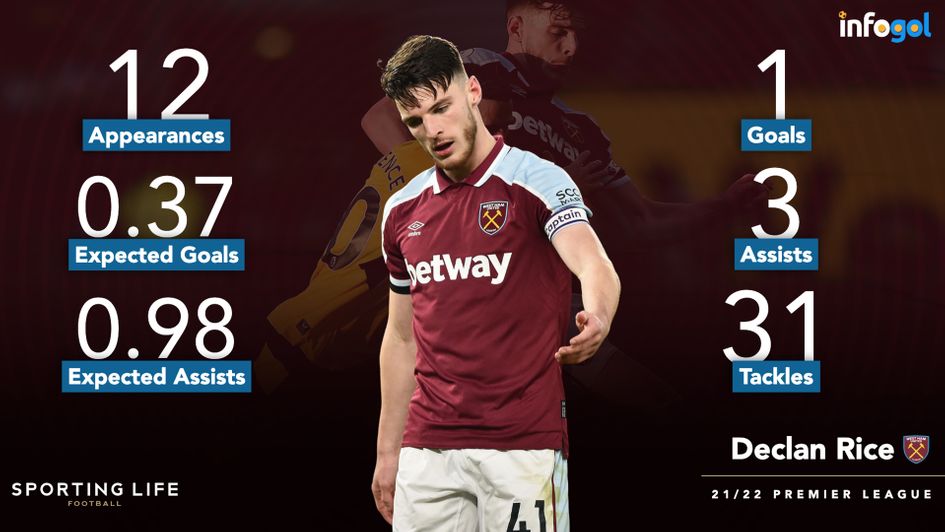 And while Rice rubs shoulders with defenders in some chart, he is side by side with flair players in others. He is seventh for progressive carries, which may as well be an annual award for Grealish, but three of those ahead of him are City defenders.

That he is more of an attacking threat is apparent in the most obvious measure. He had never previously topped two goals in a season. He has three already now, including two in Europe.

He has already equalled his Premier League best of three assists, albeit from an expected assists (xA) of only 0.98. It nevertheless means only nine players have created more goals in the division.

But there are other measures of his improvement, albeit less dramatic. Rice’s average of shot-creating actions per 90 minutes is at 2.17. Over four previous Premier League campaigns, it has gone up from 0.50 to 0.90 to 1.24 to 1.53. Now he is creating more chances again (and, averaging 1.93 in the Europa League, maintaining a similar standard across competitions).

His pass completion rate, at 90.2 in this season’s Premier League, is better than a previous best of 87.4. In particular, his long passing has become more accurate. He is also in possession more: he averages 58.4 passes per league game this season, when his previous highest was 47.7 last year.

But that extra effort on the ball has not come at a cost to his defensive efforts. Only four players have made more tackles in the Premier League than him, with 31.

He finished fourth in that chart in 2019-20, with 116. His average of 2.8 tackles per game is down on his 3.1 then but up on 1.8 last season. He is also averaging more blocks (0.8 successful ones per game) than ever before. Rice has blocked 10 shots this season, the most of any midfielder in the division.

In all positions, he is second only to Livramento for interceptions, with 34. It is another notable list because only two of the top 12 – Rice and Brentford’s Christian Norgaard – are midfielders.

It adds up to the picture of Rice, who can be competing with centre-backs and full-backs in some respects, wingers and No. 10s in another, who can improve radically different aspects of his game without weakening other parts of it.

A player who is in the top 10 of 11 different categories this season, from minutes played and fouls made to tackles, interceptions, blocks, assists and progressive carries, is staking a claim to be the Premier League’s great all-rounder.