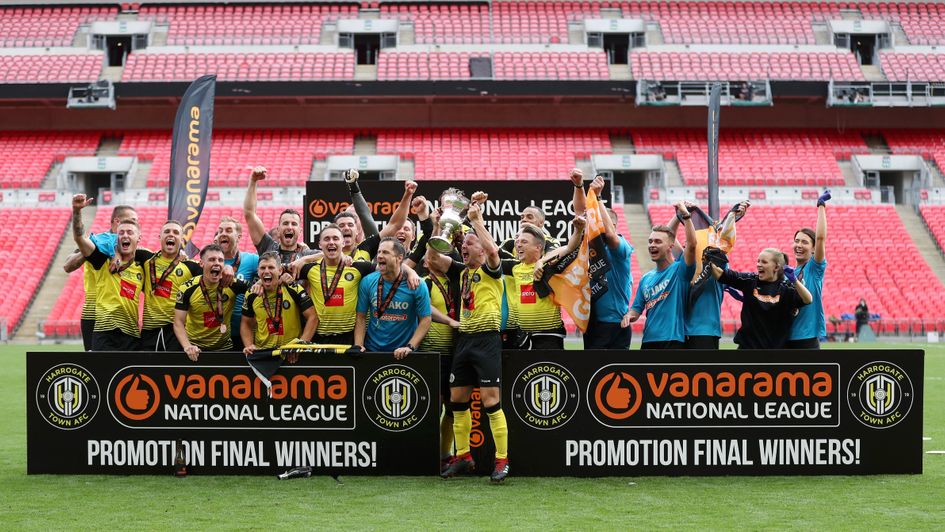 Harrogate will start life in the Sky Bet EFL next season at Doncaster’s Keepmoat Stadium.

Town have secured promotion to the English Football League for the first time in their 106-year history and have begun work on upgrading their CNG Stadium to comply with EFL rules.

The North Yorkshire club began ripping up their artificial 3G playing surface on Tuesday in preparation for a new grass pitch.

The work will not be completed until October and the new Sky Bet League Two season is scheduled to start on September 12.

Harrogate said: “We are now able to confirm an agreement with Doncaster Rovers to use their ground for our EFL home games while our new grass pitch is laid.

“Built in 2006, the Keepmoat Stadium can hold around 15,000 supporters and is located within 50 miles of the CNG Stadium.

“The groundshare will be in place until October 10 when we anticipate our new grass pitch will be ready at the CNG Stadium.”

Harrogate beat Notts County 3-1 in the National League play-off final at Wembley on Sunday and had already been granted permission by the EFL to groundshare in the event of their historic success.

Town managing director Garry Plant told the PA news agency: “No it’s not sunk in yet and I think it will be a long time before it does.

“We’re waiting to see the fixture list, so we can’t say how many home games we’ll play at the Keepmoat at the moment.

“We’ve got a new stand, which has nearly been completed, which takes us to 5,000-capacity with 1,000 seats, and the floodlights are being upgraded as we speak.

“These are peculiar circumstances which we find ourselves in and the EFL have been aware of that and have given us the nod, so we can crack on.”

Harrogate finished bottom of the Conference North – now National League North – 10 years ago and were spared relegation to the seventh tier due to the financial irregularities of Northwich Victoria, who were demoted instead.

“We have a football team now and one that’s going to be attracting a lot of visitors from places like Bradford, Oldham and Grimsby,” Plant added.

“We’re not just about Bettys tea shop anymore, we’ve got a professional football team in the English Football League – wow!”