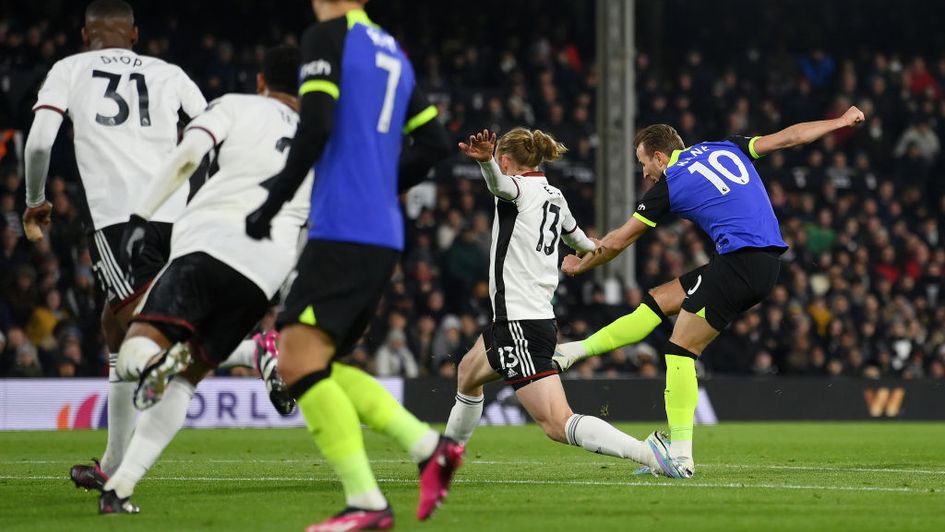 The Spurs forward controlled Son Heung-min’s pass, turned away from Tim Ream and curled into the bottom corner. It was Kane’s 266th goal for Tottenham and put him level with Jimmy Greaves, whose tally has stood since 1970.

The England captain had endured a frustrating first half, touching the ball only four times by the half-hour mark at Craven Cottage. A 30-yard effort over the crossbar soon after signalled his intentions before he joined Greaves on 266 in the first minute of stoppage time.

His record-equalling strike was met with tongue-in-cheek chants of ‘one-season wonder’ from the away fans and proved the only goal of the game as Antonio Conte's side picked up three precious points.

The match that saw Kane truly announce himself on the Premier League stage. A brace against Jose Mourinho’s Chelsea, who had only lost once all season, made the football world take note and it was the first goal by the Spurs striker that got the ball rolling. Receiving possession on the left, Kane cut inside Cesc Fabregas, held off Oscar and rifled into the bottom corner from 25 yards to help inspire a 5-3 win.

Having by now dispelled talk of being a one-season wonder, Kane produced a beauty against Tottenham’s biggest rivals during a 2015-16 campaign where his goals helped Mauricio Pochettino’s side launch an ultimately unsuccessful title challenge. Dele Alli’s backheel allowed Kane space and he curled over David Ospina from a tight angle by the edge of the area before he whipped off the plastic mask he was wearing to protect his broken nose.

One of Kane’s final goals at White Hart Lane. The forward turned away from Ashley Williams, outmuscled Idrissa Gueye and unleased a 30-yard bullet that left Joel Robles with no chance. It contributed towards the striker winning a second consecutive Premier League Golden Boot and Spurs finishing runners-up behind Chelsea.

Only a friendly but Kane followed in the footsteps of his idol David Beckham, who also played for Ridgeway Rovers and attended Chingford Foundation School, when he scored from the halfway line. In an International Champions Cup fixture with Juventus, Lucas Moura disposed Adrien Rabiot and, without even looking, Kane unleashed a first-time shot from just inside the opposition’s half that sailed over the hapless ex-Arsenal goalkeeper Wojciech Szczesny in the third minute of added time in Singapore.

Kane produced another long-range stunner in one of his final goals before the coronavirus pandemic forced the season to pause. Son Heung-min laid the ball off to his strike partner and Kane let fly from 30 yards with a dipping, swerving strike that left international team-mate Nick Pope with no chance.

Kane enjoyed a memorable 2020-21 season and was at his vintage best in an emphatic 4-1 win over Crystal Palace during the behind-closed-doors era. Two assists were followed up with a stunning chipped finish over Vicente Guaita from outside the area, one of 23 goals he scored in the Premier League during the campaign. It earned Kane a third Golden Boot win and his tally of 14 assists saw him become the first player to win both the Premier League Golden Boot and Playmaker of the Season awards.