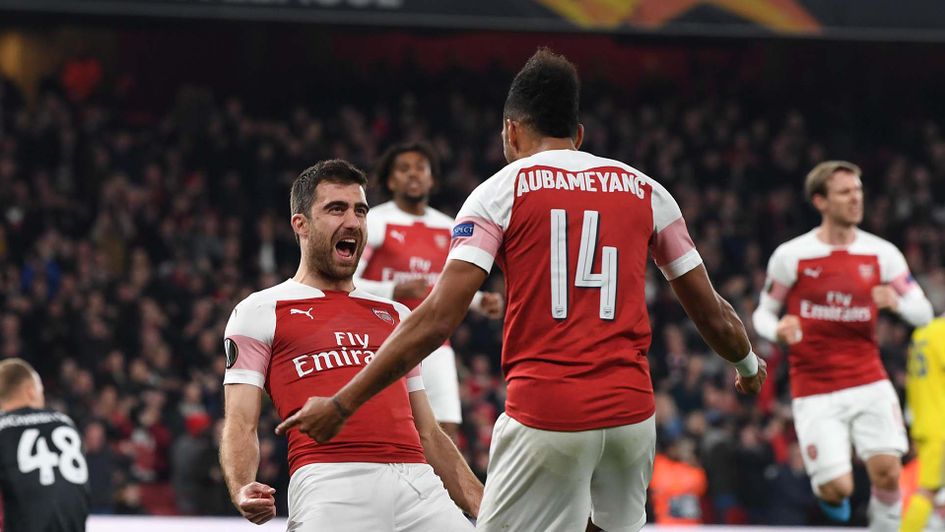 Sokratis and Aubameyang celebrate for Arsenal

Arsenal safely negotiated their way into the last 16 of the Europa League with a 3-0 win over BATE Borisov at the Emirates, while Celtic went out in Valencia.

Arsenal suffered a huge upset losing the first leg 1-0, but enjoyed the perfect start with a Zakhar Volkov own goal putting them ahead after just four minutes of the second leg.

Shkodran Mustafi put them ahead in the tie six minutes before the break and another unlikely scorer, substitute Sokratis Papastathopoulos, made the tie safe on the hour mark.

Volkov inadvertently sending a Pierre-Emerick Aubameyang centre past Scherbitski to give the hosts a crucial early goal to level the tie on aggregate.

If Arsenal thought they were going to coast into the draw for the round of 16, they were given a quick awakening as the Belarusian champions created two goalscoring chances in a matter of minutes - Maksim Skavysh firing wide before Stanislav Dragun saw a goal-bound strike cleared off the line by Lichtsteiner.

Mustafi, so often criticised for his defending, was picked out perfectly by Xhaka from a corner and the German made no mistake in powering his header into the back of the net.

Sokratis had been on the field fewer than four minutes when he headed in the third, rising at the back-post to head into an empty net after Scherbitski had come off his line and got nowhere near another Xhaka corner.

"It's up there with the proudest moments I've had as a manager.

"Everyone thought it was a formality, even Valencia.

"The referee has taken the game away from us."

Italian big guns Napoli advanced with a 2-0 win over Zurich giving them a 5-1 aggregate win - Adam Ounas set up Simone Verdi to volley in the opener just before the break before scoring himself in the 75th minute.

Celtic's campaign came to an end as they were beaten 1-0 on the night for a 3-0 aggregate loss to Valencia, playing most of the night with 10 men.

Already up against it facing a 2-0 deficit, Celtic were down to 10 when Jeremy Toljan collected his second yellow with eight minutes of the first half left.

They held out until the 70th minute when Kevin Gameiro fired in for Valencia moments after coming off the bench.

Pablo Fornals' late goal sent Villarreal through as a 1-1 draw with Sporting Lisbon was enough for a 2-1 aggregate win.

Dinamo Zagreb cruised to a 3-0 home win over Viktoria Plzen, turning their tie around to advance 4-2.

Mislav Orsic finished a fine move 15 minutes in and Emir Dilaver had them on top on aggregate 11 minutes before the break, with Bruno Petkovic adding a flourish in the second half.

Zenit St Petersburg are through after winning an engaging match with Fenerbahce 3-1 to advance 3-2, the decisive goal coming from Saradar Azmoun with 14 minutes left.