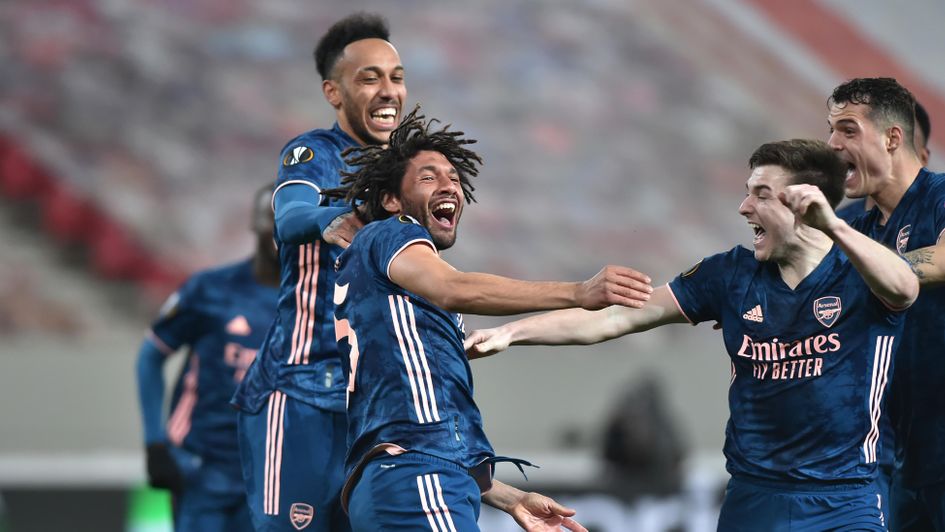 Arsenal and Spurs both won in the Europa League while Manchester United were denied by a late Simon Kjaer goal and Rangers also drew 1-1.

Arsenal struck two late goals to beat Olympiacos and take control of their Europa League round of 16 clash – having almost proved architects of their own downfall once again.

The Gunners will defend a 3-1 lead at the Emirates Stadium next week and were good value for their win in Greece.

Martin Odegaard’s first Arsenal goal had them ahead only for another defensive calamity to gift Youssef El-Arabi the equaliser just before the hour.

Arsenal were rocked but recovered well and would hit two goals in six minutes as a Gabriel Magalhaes header and a fine strike from substitute Mohamed Elneny earned a good victory.

Mikel Arteta saw his side dumped out by Olympiacos at the round of 32 stage last season despite winning the opening leg in Greece but will be hoping lightning does not strike twice.

Arsenal were back at the Georgios Karaiskakis Stadium for the second time in a fortnight, having hosted the ‘home’ leg of their tie against Benfica on the outskirts of Athens due to current coronavirus travel restrictions.

The Premier League side have now won more Europa League knockout stages at the home of Olympiacos than the reigning Greek champions themselves – but they made it harder for themselves than was necessary.

Harry Kane’s sensational season continued as his two goals put Tottenham on course for the Europa League quarter-finals as they beat Dinamo Zagreb 2-0 in last-16 first-leg.

The England captain is having one of his most productive campaigns and took his tally to 26 goals in 37 appearances, while also contributing 16 assists.

A strike in either half against the Croatians justified Jose Mourinho’s decision to select his main striker, despite the north London derby being just 72 hours away, and he equalled a club record of eight European goals in a single season set by Martin Chivers twice and Martin Peters.

He will surely break that if Spurs are to go on and win the competition, which Mourinho is targeting, though his display here might give him next week’s second leg in Zagreb off.

Spurs still have work to do in the Croatian capital, but the result here makes their task easier and the last eight is looming.

The eagerly-anticipated last-16 clash between these European heavyweights produced drama on Thursday night and set-up an interesting return fixture at San Siro next week.

Only on the pitch five minutes and he opens the scoring with a brilliant backwards header 🔥#UEL pic.twitter.com/XHBIflKmbx

In truth, Solskjaer’s side would have been fortunate to be going to Italy in the lead given how the absentee-hit Rossoneri outplayed the hosts for large periods.

United looked a shell of the side that impressively won at Manchester City on Sunday and Franck Kessie was denied an early opener when the video assistant referee contentiously ruled he had handled.

The hosts were second best throughout the opening period but inexplicably failed to go into the break ahead as unmarked Harry Maguire met a flicked-on corner with a shinned effort that hit the post.

Dean Henderson has been praised for his recent performances, but he'll be disappointed with this one...#UEL pic.twitter.com/85eIt0uQsl

Substitute Diallo did better when expertly heading in from Bruno Fernandes’ quickly-taken free-kick, but Milan secured a potentially crucial away goal at the death when Kjaer capitalised on United’s inability to defend set pieces.

Filip Helander’s away goal was the perfect hangover cure for Rangers as the newly-crowned Scottish champions recovered to claim a 1-1 draw with Slavia Prague in the Czech capital.

But their wild weekend appeared to catch up with them at the Eden Arena as they backed off to allow Nicolae Stanciu to fire Slavia into an early lead.

However, Gers hope they will be toasting progression to the Europa League last eight after next week’s second leg at Ibrox.

Helander’s tap-in preserved their 12-game unbeaten run against continental opposition and set them up with a golden chance to march on again, while they were also thankful for a stunning late save from Allan McGregor.