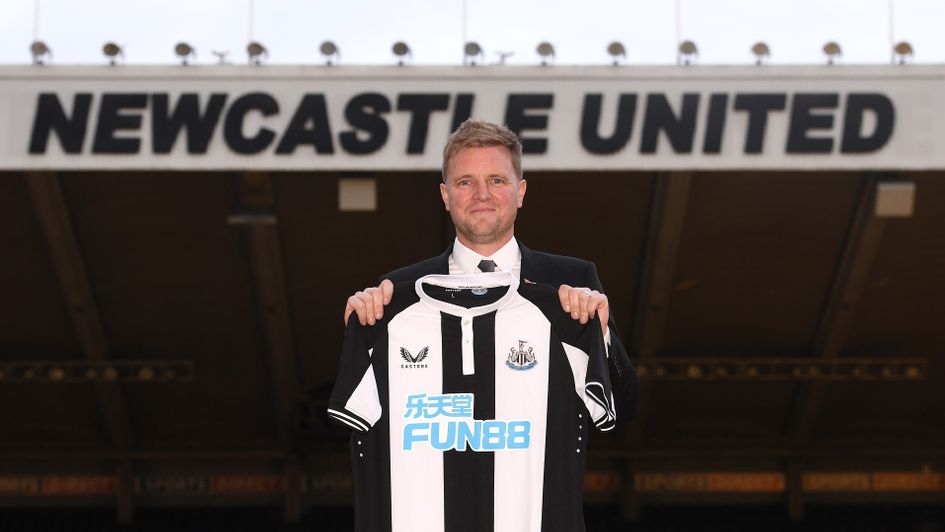 Think back to Eddie Howe's introduction as Newcastle boss. His unveiling went as exactly as expected.

After all, the first press conference as a new manager has become something of a performance art.

Habitually packed with clichés, references of learnings outside the game and the odd notable soundbite — Howe's being his digitisation of training sessions — they often exude a certain Jerry Maguire mission statement vibe.

Of course, Howe had Newcastle fans at hello following Steve Bruce's desperate tenure, but immediate improvement is required to support the long-term ambitions of the club.

Hard truths about a club often need to be said by a new manager, and Howe correctly acknowledged that the task ahead is "huge" in his press conference.

The recent takeover and subsequent new hire has elicited so much glee among the Geordie faithful that you could be forgiven for missing the fact that they've failed to win a single game this season.

Newcastle are currently 19th in the Premier League table, sitting on the same number of points as rock-bottom Norwich, a team that have already been written off in the fight for survival.

Not much separates the two teams from a data perspective, either, with Newcastle performing to a similar level when looking at underlying metrics, even sitting below Norwich in Infogol's expected goals table.

Newcastle's defensive displays have been somewhat shambolic this term, conceding 24 goals in 11 matches and allowing an average of 2.02 expected goals against (xGA) per game. 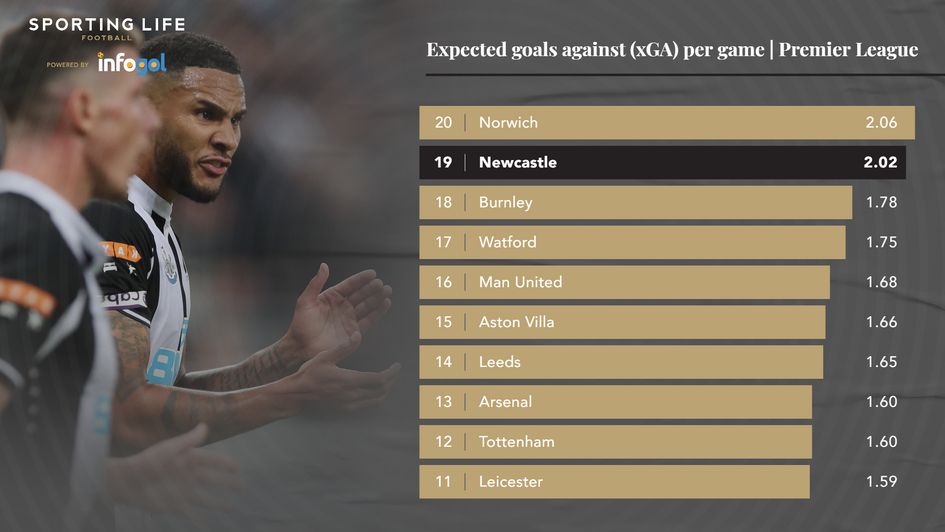 Improvement in that area will obviously be a point of emphasis under new leadership, but issues have also resurfaced in Newcastle’s attacking process.

After creating plenty of chances at the end of the 2020/21 season, Newcastle’s numbers have declined drastically, averaging just 0.69 expected goals for (xGF) per game across their last five league fixtures.

That is something Howe has explicitly stated he wants to change, referencing the front-foot and "brave, attacking football" he believed his Bournemouth side played, alongside his unwillingness to stray from that approach.

Bournemouth's underlying numbers in Howe's lengthy spell in charge suggests that might be a false flag, though. 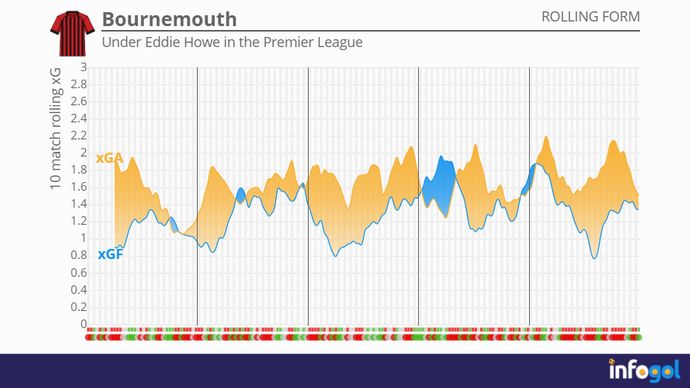 As the blue xGF line shows on Bournemouth’s 10-match rolling xG averages with Howe at the helm in the Premier League, there were periods — albeit brief — when the Cherries created an impressive amount of chances, but they averaged just 1.30 xGF per game across the five seasons in the top-tier.

Perhaps more worrying is the defensive numbers during the same period, especially when considering the primary weakness at Howe's new club. Bournemouth averaged 1.65 xGA per game under Howe, failing to improve over time.

Although Howe deserves a huge amount of credit for taking Bournemouth all the way to the Premier League, if we set aside finishing positions, overall points totals of 42, 46, 44, 45 and 34 aren't overly impressive, fuelling the fire for doubters.

Howe's reign at Newcastle begins at a curious time, too.

There is obviously huge investment on the horizon, but the relegation battle ahead is a present danger.

While recognising long-term views, Howe stressed the importance of focusing on the "very short-term" in his press conference, and he was right to do so.

Based on Infogol's forecasted finishing positions, only Tottenham have an easier time of it than Newcastle in the next four fixtures. The Magpies face Brentford (h), Arsenal (a), Norwich (h) and Burnley (h) after an international break with the new manager — a golden opportunity to gain valuable points. 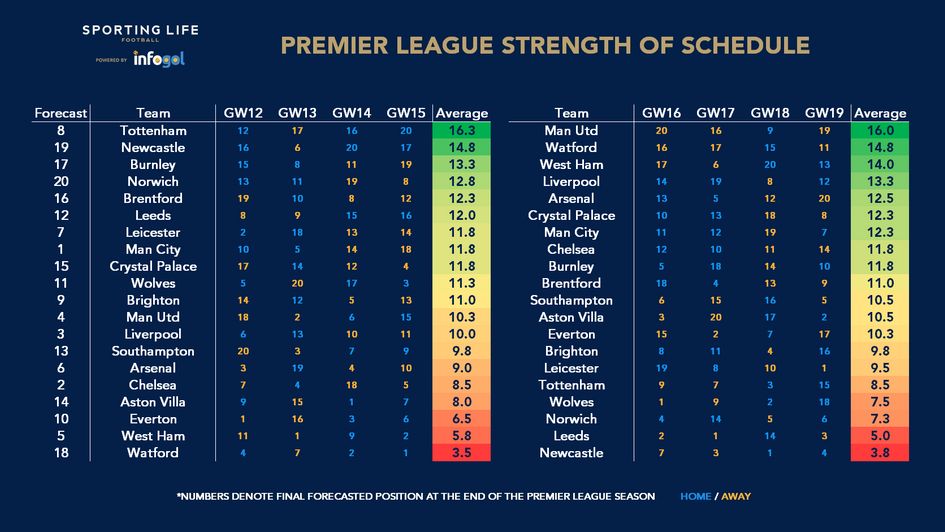 The following four fixtures, which ranks as the most difficult run of any Premier League side according to the same metric, only serve to add to the significance of the first four, visiting Leicester and Liverpool before hosting Manchester City and Manchester United.

It is surely a period that will determine how loud Newcastle fans will shout SHOW ME THE MONEY in January, which brings us nicely back to Jerry Maguire's mission statement scene.

'The Things We Think and Do Not Say' was met with a round of applause from the crowd, one that was still ringing when someone – referring to Jerry Maguire's job security - asked “how long do you give him?”.

Inevitable investment will indeed keep the crowd clapping, but Newcastle's immediate schedule will dictate so much.

Granted, Eddie Howe's job security is highly unlikely to be tenuous, no matter what the results, but, perhaps unfairly, it is a stretch that will shape a season.