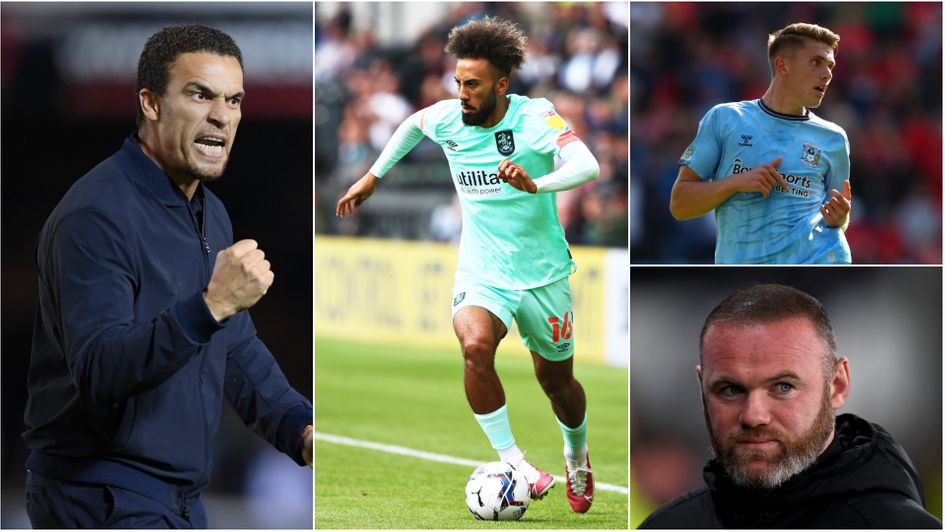 Liam Kelly looks at the underlying numbers in the early parts of the Championship season, highlighting trends at the quarter point of the campaign.

The 11 games played this term offers us enough of a sample size to examine various metrics in the second tier, so often a difficult division to predict.

Entering the 2021/22 Championship campaign, West Brom and Fulham were widely thought of as favourites to return to the Premier League, and the opening games of the season have done little to change those expectations.

Both teams have performed the best from a data perspective, despite sitting in second and fifth respectively and looking far from infallible in recent weeks.

West Brom (+10.3) and Fulham (+10.0) lead the way in terms expected goal difference (xGD) and expected points (xP), a clear sign that, if they continue in the same manner, the pair will be in contention at the top. 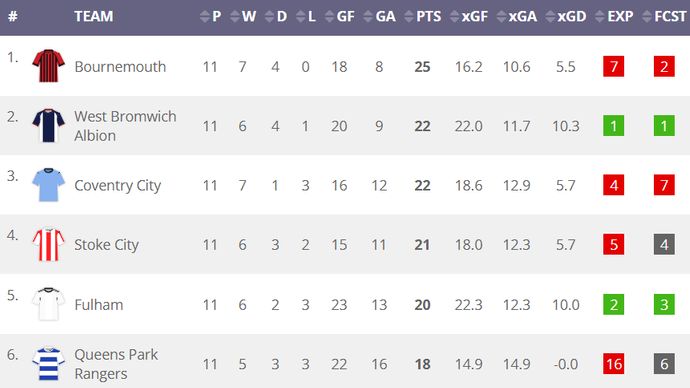 Unbeaten table-toppers Bournemouth look like their promotion push is fairly sustainable, too, relying on a solid defensive process so far this term. Scott Parker's side have allowed an average of 0.96 expected goals against (xGA) per game en route to conceding just eight goals in 11 matches.

Viktor Gyokeres might not have started the season thinking he would replace Zlatan Ibrahimović in Sweden's squad for the October international break, but it is hard to argue against him earning the spot.

His nine goals from 6.18 xG, which includes a missed penalty, have powered Coventry to third place in the table. 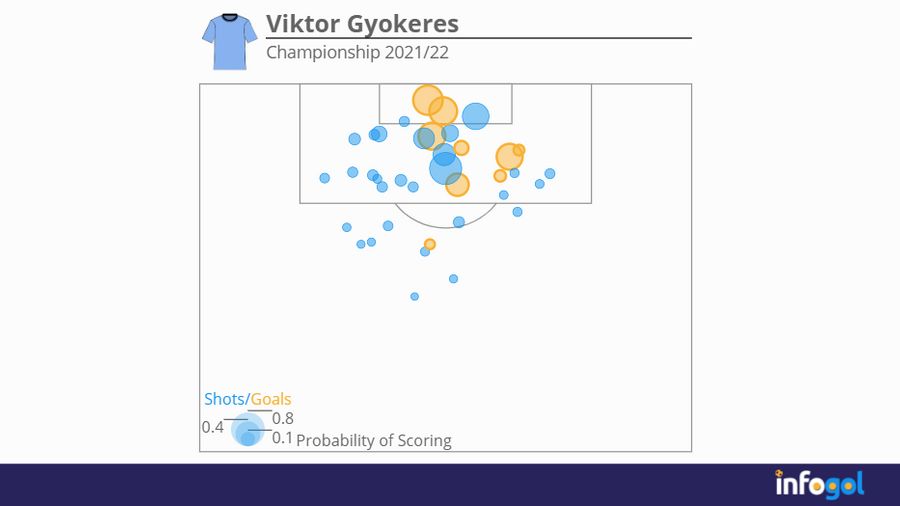 It's not a false position for the Sky Blues, either, posting underlying numbers that are more than worthy of a play-off spot at present.

A feel-good story in this international break has been Sorba Thomas' inclusion in the Wales national team setup, one that is fully deserved when looking at the data.

The 22-year-old was playing non-league football for Boreham Wood before earning a move to seventh-placed Huddersfield in the January transfer window. 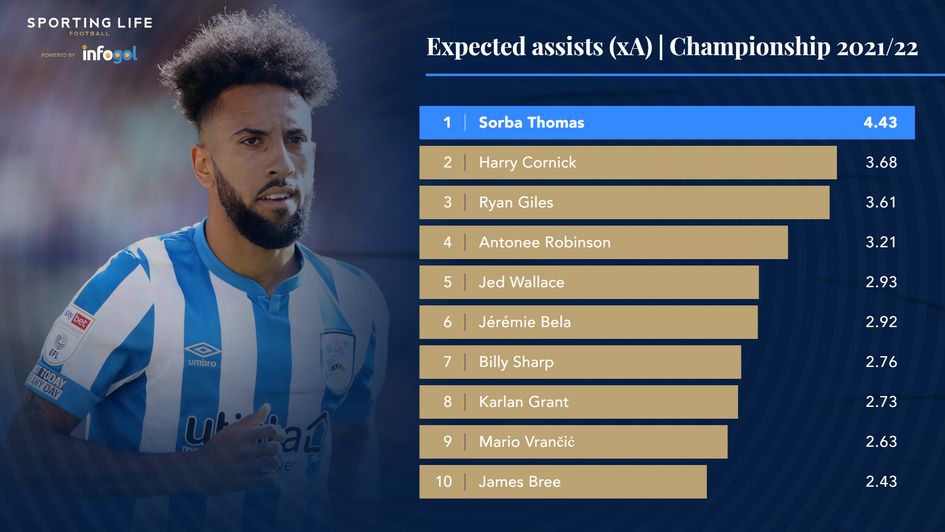 Now, Thomas leads the Championship in actual (6) and expected assists (4.48 xA), proving to be an elite creator in the second tier — a leading light in a team that was predicted to struggle this season.

Millwall's campaign has been so uninteresting that it has become interesting. Hanging around mid-table, the Lions could barely be more 'mid' when looking at the numbers.

Gary Rowett's side have scored 11 and conceded 11 goals in 11 games, drawing the most amount of matches of any team in the Championship (6). Their xG metrics are just as middling, too, posting a -0.6 xGD and entering the next round of matches 12th on expected points.

Luton will be wondering how they sit two places behind Millwall, holding a +9.2 xGD that belies their position in the bottom half of the league table.

Recent results must be infuriating to boss Nathan Jones given the performances put in, winning just one of their last seven matches despite creating the better scoring opportunities in each game — often by a significant margin. 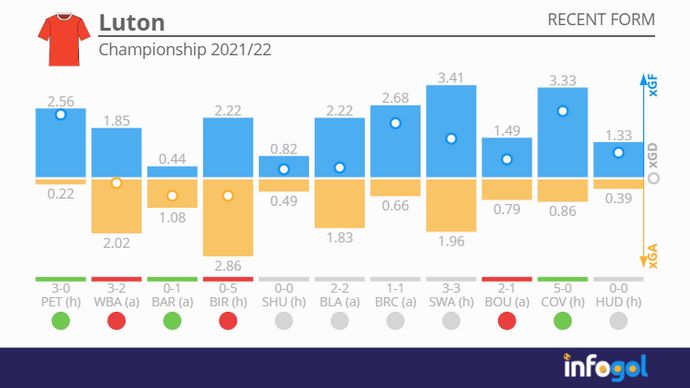 The Hatters deserve to be in a much better position based on underlying numbers, perhaps even as high as newly-promoted Coventry.

Last season's incredible push to the play-offs feels like a distant memory for Barnsley, who currently find themselves in the relegation zone.

Valérien Ismaël's successor, Markus Schopp, is justifiably under pressure at the moment, with his team looking like the worst performers in the division thus far. 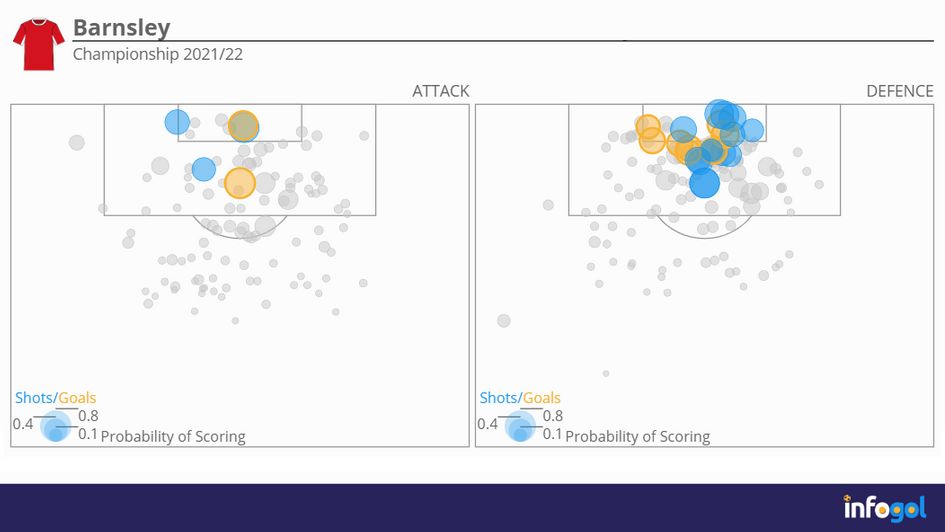 Barnsley's problems are distinct when looking at their attacking and defensive shot maps in the Championship this term, creating a league-low four non-penalty big chances and conceding a league-high total of 22.

Change is most certainly needed if the Reds wish to survive this season.

Dearth of goals at Derby

It's curious to see a team who have allowed the least amount of goals (eight from 14.6 xG) in the league be rooted to the bottom of the table.

Of course, financial mismanagement has played a major part in Derby's demise, docked 12 points after confirming the appointment of administrators in September, but chance creation is a serious issue in spite of their good defensive process.

Averaging 0.84 xGF per game won't be enough for Wayne Rooney's men to claw back the deficit they face.