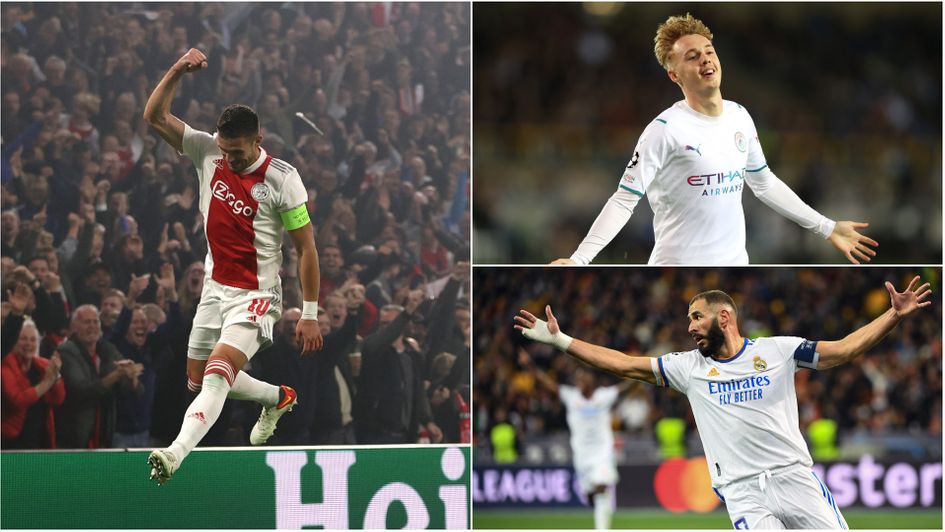 It was a packed night of Champions League football, with some big winners

Sporting Lisbon were dominant in Turkey. After racing into a 15th minute through Sebastian Coates, they were pegged back in the 24th minute before Coates scored a second a few minutes later.

From then on, the Portuguese side took charge, scoring a third before half time and adding a fourth just before the full-time whistle. It was a must-win for both sides, but it was Sporting who were supreme and put themselves back in the qualification picture in Group C.

Pep Guardiola named a strong side to start the game, before replacing and rotating as his side ran riot early in the second half.

Joao Cancelo opened the scoring in the 30th minute after a sublime pass from Phil Foden sent the Portuguese racing through, before a Riyad Mahrez penalty doubled City's lead before the break.

Kyle Walker made it 3-0 shortly after the interval, before a raft of changes from the visitors, including the introduction of youth academy star Cole Palmer.

Palmer, introduced in the 65th minute, scored just two minutes later on what was a dream night for the youngster.

Brugge did pull one back late on through Hans Vanaken, before Mahrez got his second of the game in the 84th minute.

Ajax blew Dortmund away in Amsterdam, scoring through a Marco Reus own goal in the 11th minute and not letting up afterwards. Former Manchester United defender Daley Blind scored a second in the 25th minute, with a disjointed Dortmund no match for the flying Dutchmen.

Anthony scored a third just before the hour mark, before Sebastien Haller scored his sixth Champions League goal of the season in the 72nd minute. Ajax have won all three of their Group C matches to take a stranglehold on proceedings.

A topsy-turvy game that saw plenty of drama, but one that ended in a Liverpool win. It was the Reds who raced into an early lead, scoring two goals in the first 13 minutes through Mohamed Salah and Naby Keita.

But Atletico came roaring back, with two goals before the break from Antoine Griezmann levelling things up at the break. Griezmann was at the centre of controversy seven minutes into the second half, as his high boot was punished with a red card.

Substitute Diogo Jota was pulled down in the 78th minute to win a penalty for Liverpool, which Salah dispatched, before Atletico were awarded a penalty of their own just at the end of the 90 minutes, only for the referee to go to the on-field monitor and change his decision.

It was a game that had everything, but it means Liverpool top the group thanks to winning all three matches.

After winning their opening two group games, defying the odds, Sheriff were brought back down to earth by Inter Milan in Italy. Simone Inzaghi's side took the lead through Edin Dzeko's sensational volley, but were pegged-back thanks to Sheriff's match-winner in Madrid Sebastien Thill.

But in 10 second half minutes Inter secured the three points through Arturo Vidal and Stefan de Vrij, tightening the group standings in the process.

In what was a must-win game for both teams, it was Porto's Luis Diaz who settled matters in the second half.

The Portuguese side held AC Milan at bay throughout the game, impressing defensively, with a 1-0 success enough for them to move level on points with Atletico Madrid.

PSG came from behind to beat RB Leipzig on Tuesday, with Lionel Messi scoring a brace. It was his fellow superstar who got the first of the match, Kylian Mbappe scoring a great counter attacking goal, before the German visitors equalised through Andre Silva.

Nordi Mukiele gave Leipzig the lead in the second half, before Messi linked up with Mbappe before slotting home to level things up. Mbappe was involved again, winning a penalty in the 74th minute before Messi scored it via a panenka.

🤤 Lionel Messi showing how much pressure he feels when a Champions League game is finely poised at 2-2 with just over 15 minutes remaining....#UCL #PSG pic.twitter.com/t1FioLlHQ5

The drama wasn't over there, as Achraf Hakimi was brought down for a second penalty in stoppage time. This time, Mbappe took the spot-kick and blazed it over the bar. Nonetheless, the win leaves PSG top of the group, while RB Leipzig look set to be fighting for third place.

Real Madrid took a while to get going, but soon found their groove to dominate Shakhtar in Kiev. An own goal gave Carlo Ancelotti's side a half-time lead, before Vinicius Junior stole the show.

After netting his first in the 51st minute, the Brazilian took off on a mazy, slaloming run between orange shirts before dispatching a second to put the game beyond the Ukrainians. Vinicius then turned provider for his compatriot Rodrygo to score a fourth. Benzema added extra gloss to the scoreline with a late strike to cap an excellent display.