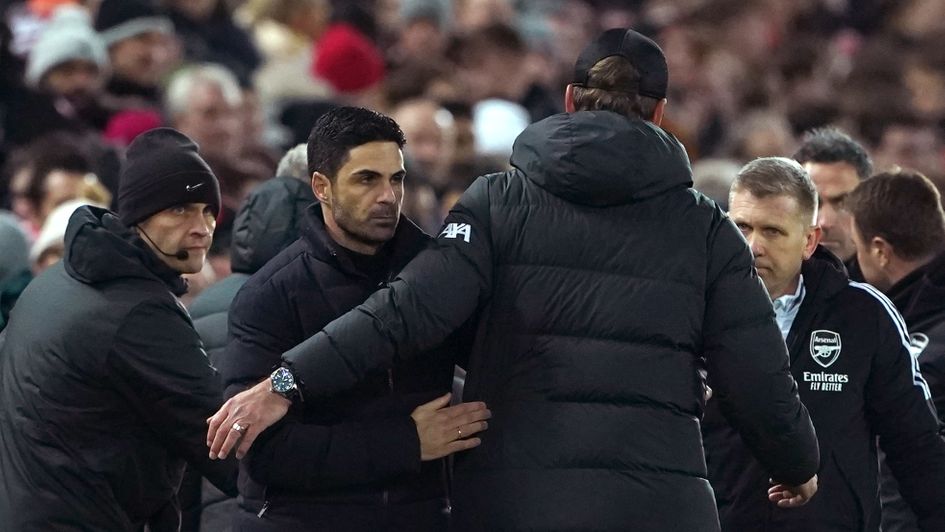 Ten-man Arsenal displayed resilience and fight to earn a goalless draw at Liverpool which means the Gunners carry the initiative into next week’s Carabao Cup semi-final second leg.

Granit Xhaka’s second red card in just 13 appearances this season handed Liverpool the numerical advantage for 71 minutes but they had been well below their best before that and they struggled even more against an organised 5-3-1 formation.

Arsenal actually performed better with a man fewer and Bukayo Saka’s thrusting runs down the right ensured their hosts always had to be aware of his threat.

The England midfielder also forced the best save of the night from Alisson Becker – remarkably making his League Cup debut after three-and-a-half-years with the Reds – midway through the second half.

Liverpool had 78 per cent possession but only managed to force Aaron Ramsdale into one save – in added time – from the 17 attempts they had.

Jurgen Klopp had wanted a one-off game and that is effectively what he has now got, although following last week’s postponement of the original first leg in London because of Liverpool’s Covid outbreak the advantage is now with Mikel Arteta’s side.

Klopp had brought back his recognised first team, or as close as possible to it, for this tie but nevertheless the whole side had only 71 previous League Cup appearances for the club between them – and captain Jordan Henderson and James Milner accounted for 37 of those.

Arsenal, too, went strong after their defeat to Championship side Nottingham Forest on Sunday but still found themselves facing significant Liverpool dominance in the opening 25 minutes, not helped by the early loss to injury of Cedric Soares.

Ben White almost diverted Takumi Minamino’s cross into his own goal before the pressure finally told when Xhaka stretched to reach Andy Robertson’s searching crossfield ball and succeeded only in bringing down Diogo Jota with a waist-high challenge on the edge of the area.

Referee Michael Oliver had no hesitation in showing the Switzerland midfielder his third red card in the last 18 months.

Eddie Nketiah’s immediate withdrawal for Rob Holding saw Arsenal switch to damage-limitation mode with a back five but it gave them renewed purpose.

Willed on by an animated, arm-waving Arteta they more than comfortably kept their opponents, who struggled without top scorer Mohamed Salah and Sadio Mane, who are at the Africa Nations Cup, at bay.

Saka almost snatched the winner when he broke through once again only to be denied by the outstretched arm of Alisson but when the midfielder limped off nine minutes from time Arsenal settled for what they had, which was more than deserved.

Minamino, who had earlier flashed a shot across goal, blazed a half-volley over an open goal with the last real chance of the game.