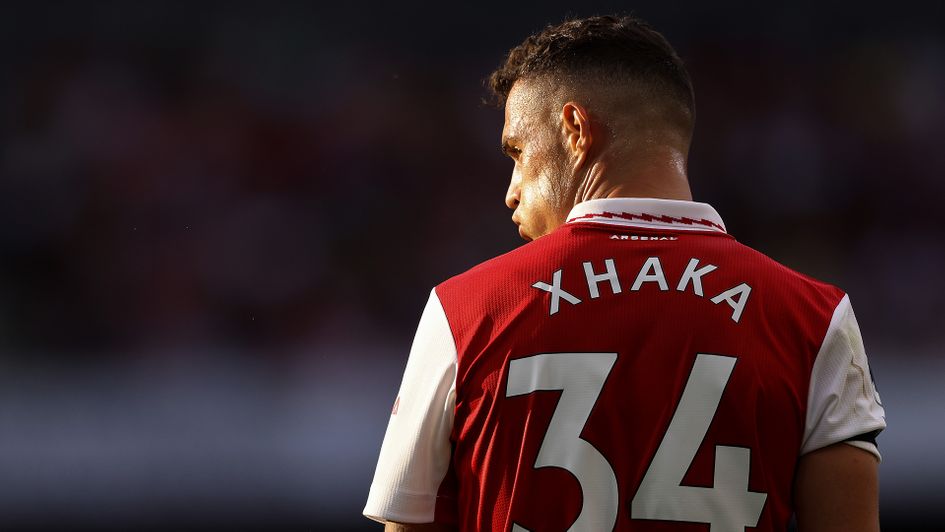 Why is it going so right for Granit Xhaka at Arsenal this season?

After six tumultuous years at Arsenal, it was widely expected that Granit Xhaka would either leave in the summer or see his game time limited for the 2022/2023 season.

But both Xhaka and Mikel Arteta had other ideas, well and truly flipping this train of thought on its head.

Establishing himself as an undisputed starter from his more advanced midfield post - where he performed well late last season too - the Swiss ace has relished this role that's been perfectly devised by Arteta to get the best out of him.

Having unquestionably been one of the standout players in the Premier League so far, and with Arteta wholeheartedly believing him, Xhaka's cut a revitalised, determined and confident figure on his way to shining on both sides of the ball.

"For me, Granit Xhaka is a player that we’re finally seeing play like he does for Switzerland', former Arsenal legend Ian Wright asserted.

"He’s playing in a position that suits him, playing more offensively. He’s playing with real authority and confidence. Lately he’s been able to find space and from there he can be really dangerous because, for me, he’s got easily one of the best left foots in the Premier League.

"He sets the tempo for Arsenal off the ball. I’m really pleased for him because I was one of his staunchest critics. But now we’re seeing the best of Granit Xhaka." 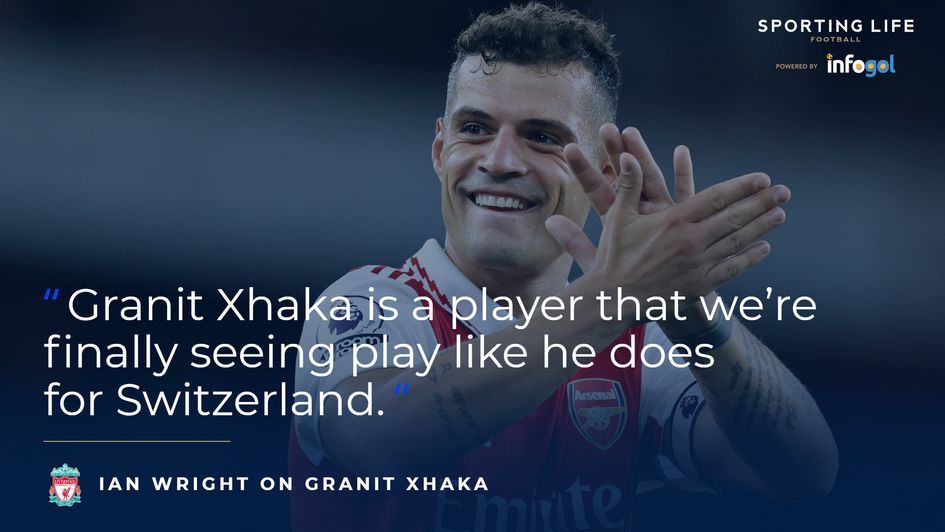 Catching the eye going forward from his left sided central midfield berth within Arteta's 4-3-3, not only has he already bagged a goal (0.92 xG) and three assists (1.06 xA) for the table-topping Gunners, but his movement and interactions with his teammates have been equally vital.

Joining forces brilliantly with winger, Gabriel Martinelli, and fullbacks, Oleksandr Zinchenko and Kieran Tierney (whoever is preferred), it's been intriguing watching them work together to create space and unsettle backlines. 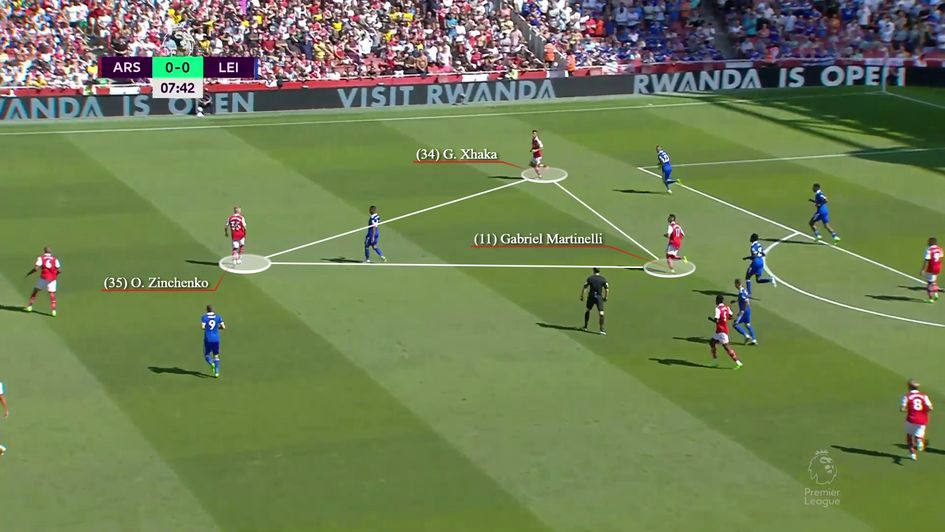 Example of the rotations between Xhaka, Martinelli and Zinchenko

More adventurous and given a remit to run in behind and wreak havoc for opposition defensive lines, his devastating runs have added plenty of impetus going forward.

Indeed, with defenders typically preoccupied with a marker or ball watching, Xhaka's shrewdly timed and directed runs into gaps have been a joy to watch.

"I’m more than happy to help, of course."

Moreover, even if he isn't used, these bursts often benefit a colleague by drawing out a defender to create space to be exploited.

The conditions that Arsenal manufacture in order for him to embark on these runs deserve mention, for Martinelli will usually pull a defender wide to ensure a disconnect in the backline is conjured.

While striker Gabriel Jesus will also typically be occupying one or more markers, thus allowing Xhaka to maraud into pockets between defenders to be a threat in the box or between the lines. 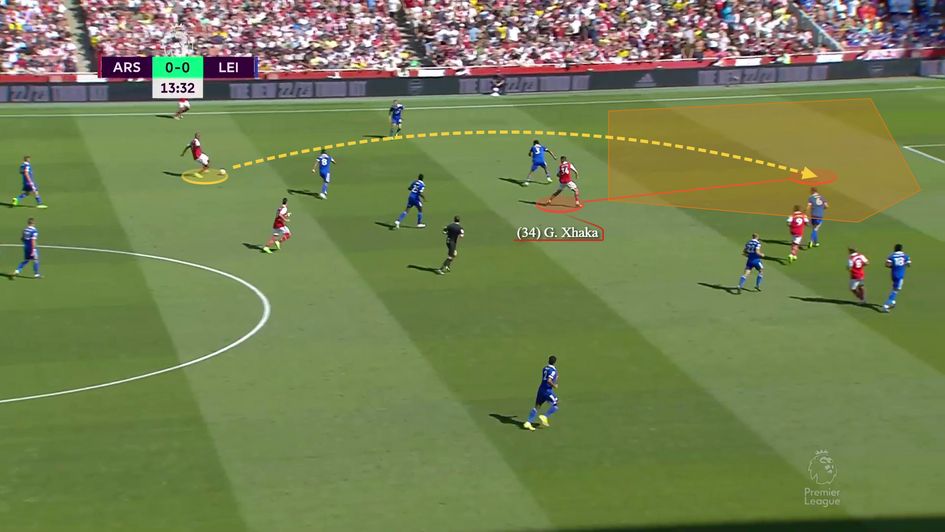 Timed run in behind 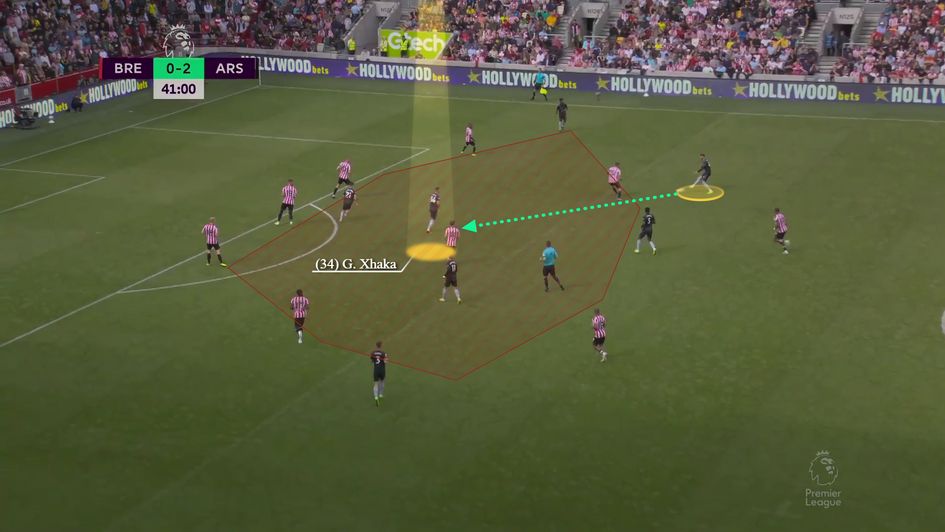 Receiving between the lines

The positioning of the fullbacks is imperative too, for they're the ones who stay deeper and provide structural security in case of a turnover, which grants Xhaka the freedom to scorch ahead freely.

Forming a particularly strong partnership with the versatile Zinchenko, how the pair seamlessly rotate to add variety and keep defenders guessing has been very impressive.

Indeed, seeing as Xhaka is comfortable in deeper areas, he's enjoyed spells in auxiliary full-back zones, where he can have more time and space on the ball to open up the whole field and use his wand of a left foot to dictate the play. 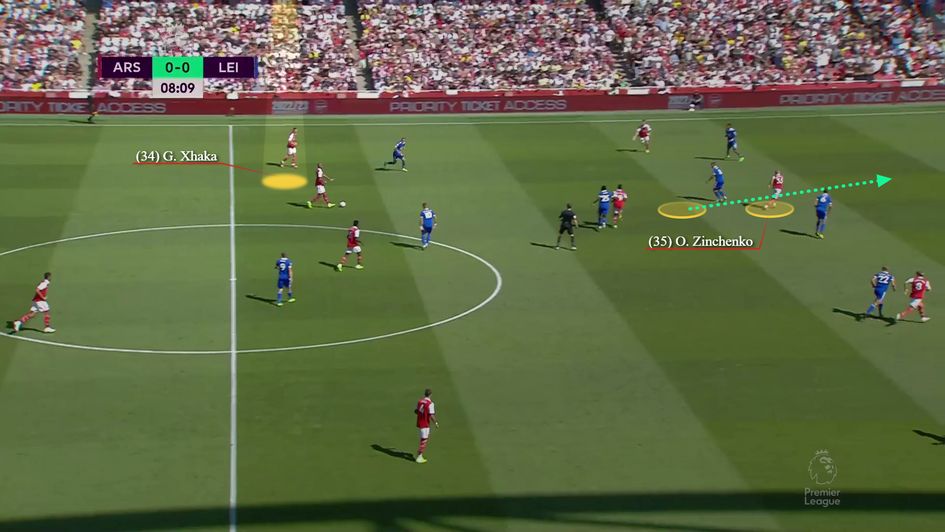 Also interchanging astutely with Martinelli, knowing when to generate overloads in build up and forever offering himself to support attacks, opponents have certainly found it tough to contain Xhaka and co. down the left. 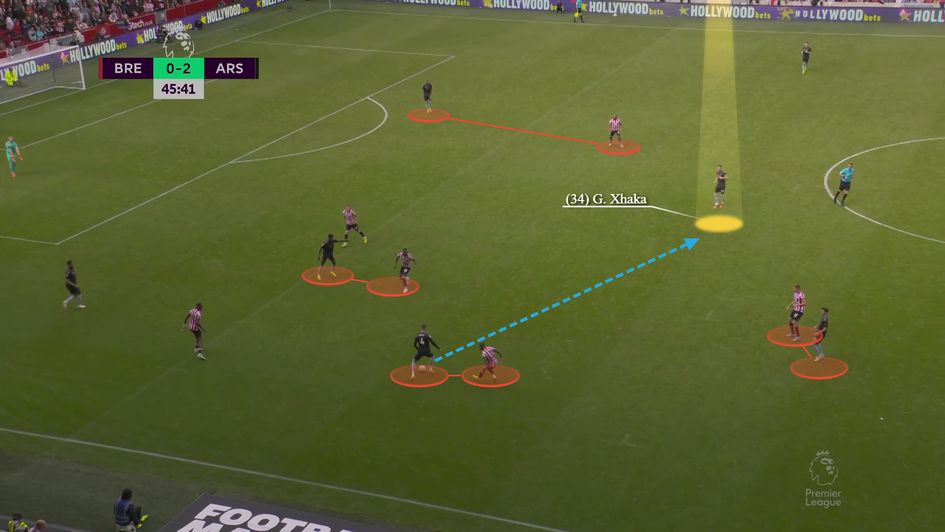 Receiving in space while forming a 5v4

Technically excellent and boasting superb vision, the 29-year-old's passing has continued to come to the fore.

Whether it be switches of play, hitting penetrative line-breaking passes into attackers, launching measured through-balls over the top, engaging in slick interplay, firing in crosses or recycling possession coherently, he's had a pass for any scenario.

The examples below duly demonstrate what an asset his distribution is, with his capacity to spot and oblige runners, in combination with the immaculate weighting of his passes, ensuring he's a major weapon.

Another headed goal for Arsenal with Jesus nodding past Raya! ⚽

The ball from Xhaka was sublime! 👏 pic.twitter.com/9bQTs0vHd1 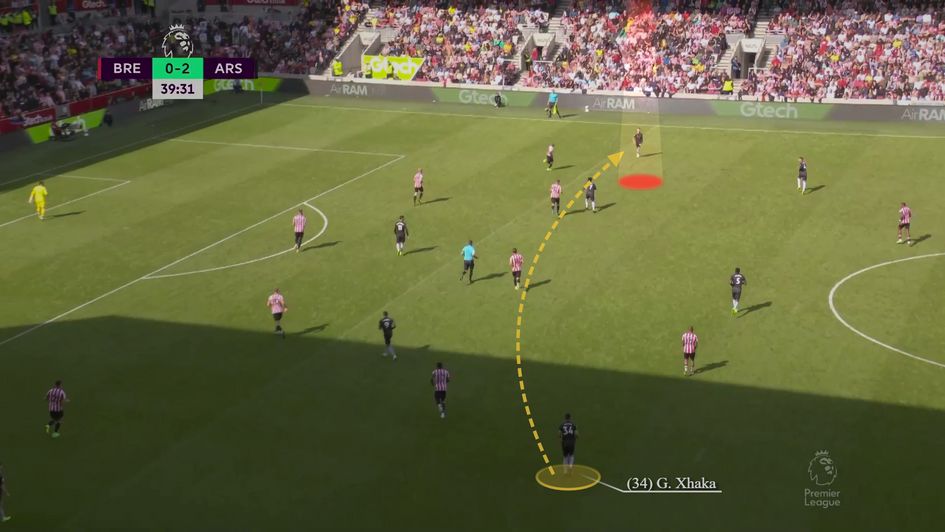 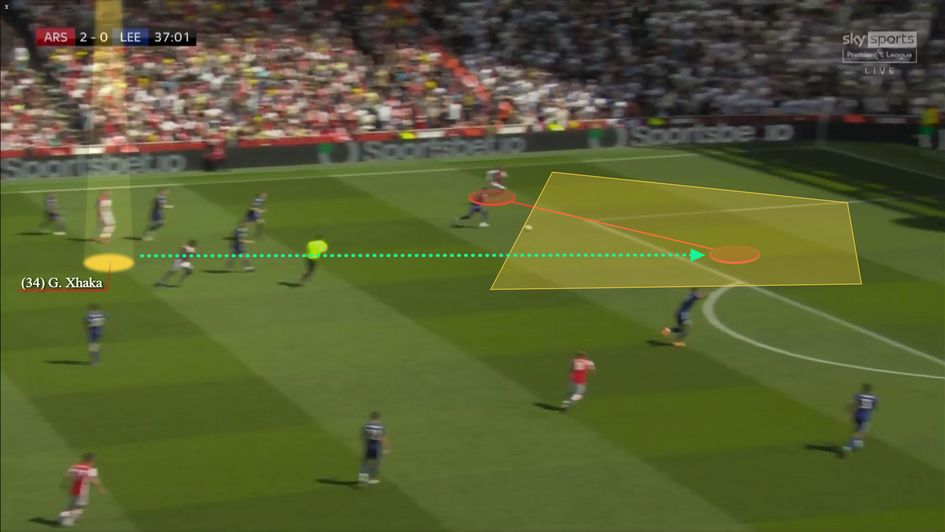 Piercing through ball in behind

The former Basel prodigy has also impacted proceedings with his dribbling, where he's shown he can coolly weave away from danger, outfox opponents with clever touches and protect the ball while waiting for a viable outlet.

By the Wyscout numbers, it’s remarkable how he stacks up against star Manchester City midfielder, Ilkay Gundogan, a player similar to him in many ways, with him holding the ascendancy in a host of key offensive metrics. 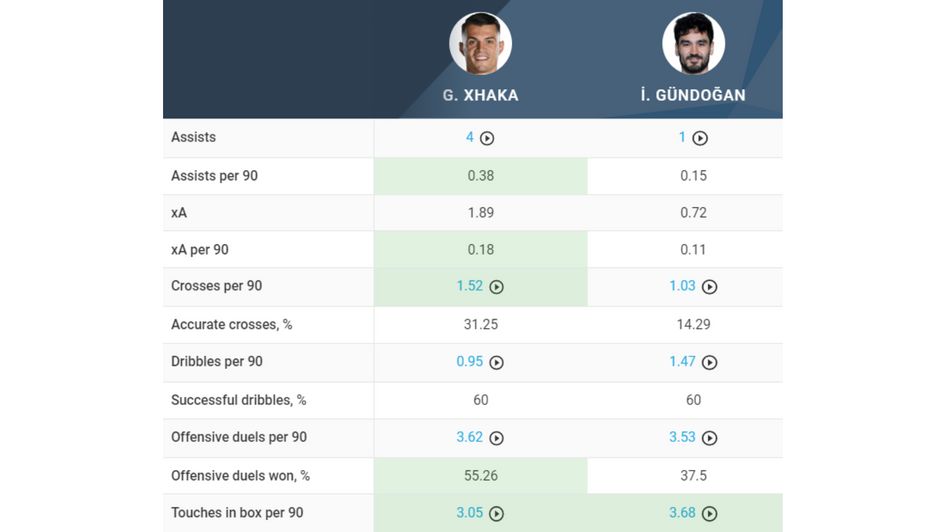 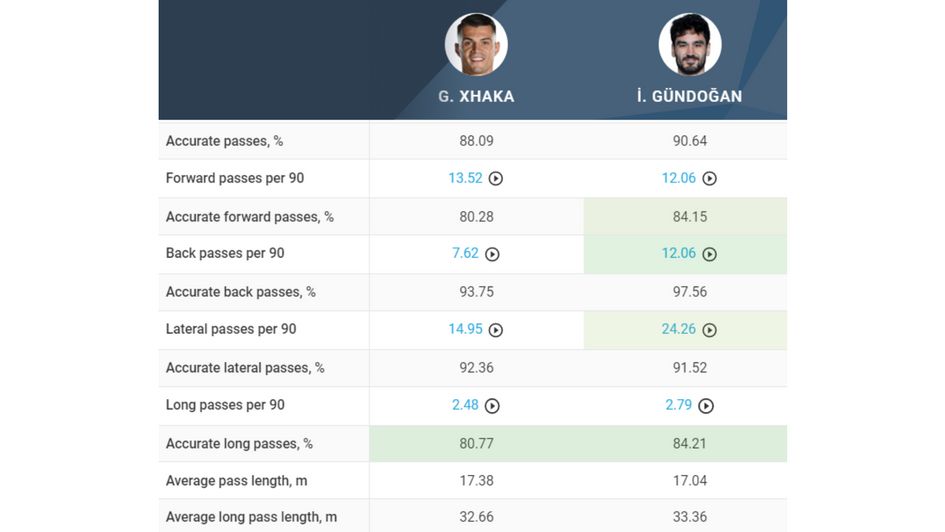 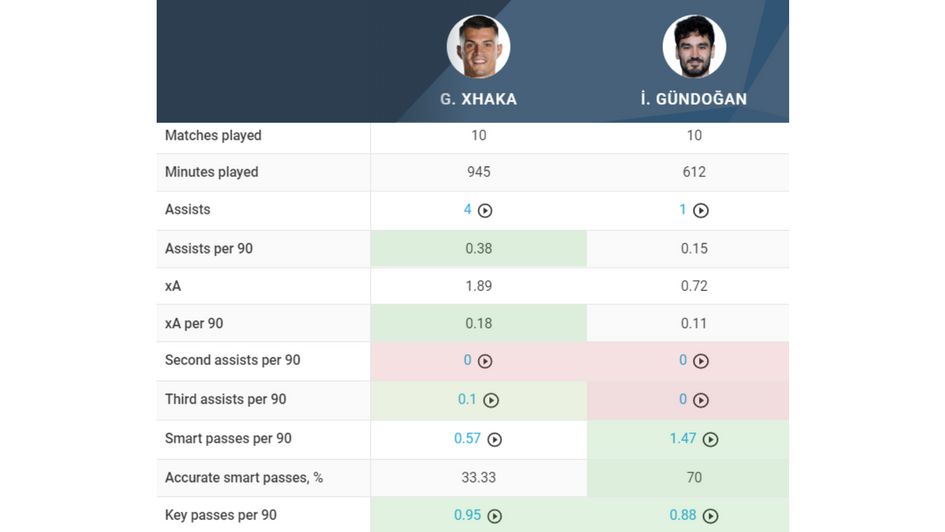 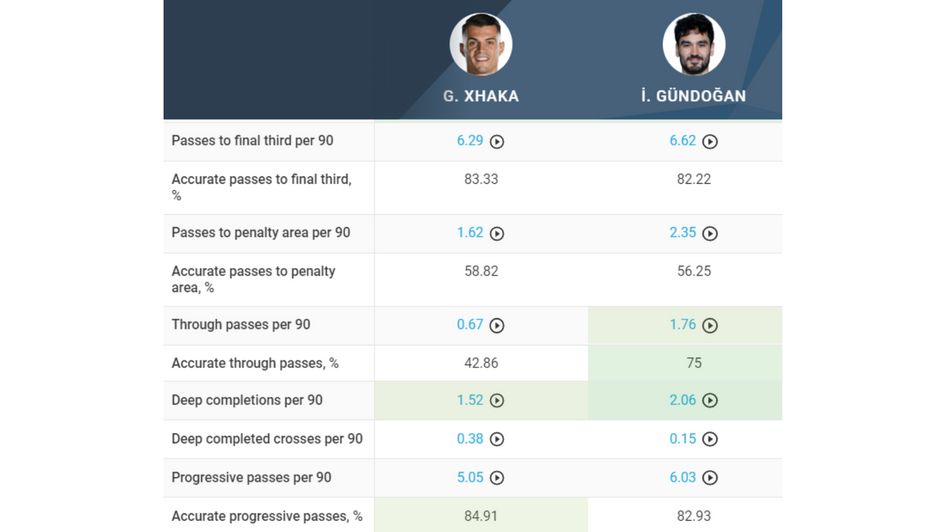 Meanwhile, on the defensive end, his awareness of opponents, aggression in the challenge, intelligent pressing, fierce counter-pressing and desire to assist his teammates has seen him stamp his mark while setting the tone for his colleagues to follow.

In arguably the best form of his career and such an integral component of Arteta's side, the character, maturity and dedication he's shown to earn his manager's faith and regain the love of the supporters has been fantastic to witness.

“How he goes about every day, how he’s learned through different moments in his career – whether they are here or with the national team – and his willingness over time to stay humble, to look forward and to try to get better. When you do that, normally good things happen," Arteta insightfully explained.

“I think he feels now that the love and respect goes both ways. You see our supporters and the way they were singing to him. It makes him emotional. It makes him try to give even more and I’m really pleased for him because, in my opinion, he fully deserves it.” 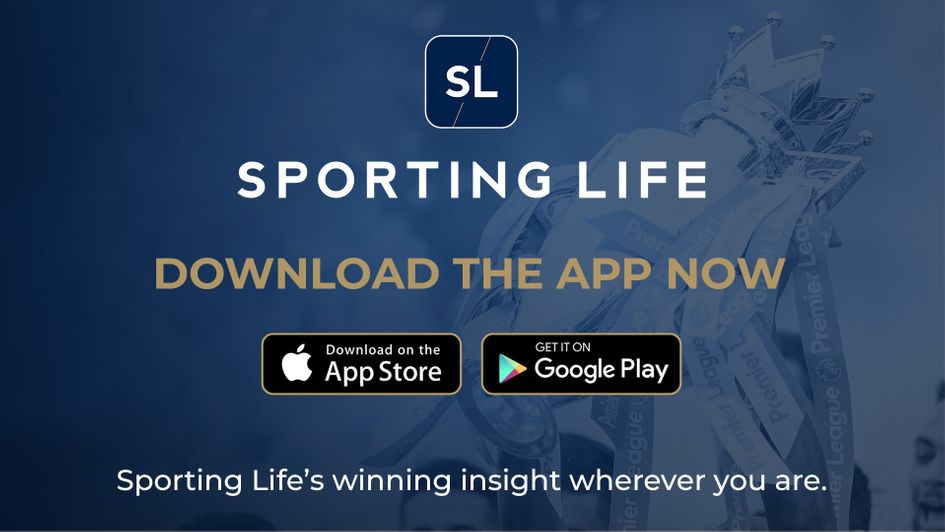 The former Arsenal captain's experience and leadership warrants praise as well, for his guidance, tactical acumen and nous to support them during difficult situations and impart his knowledge onto them in training is definitely a bonus for the plethora of young players Arsenal have in their ranks.

Feeling appreciated, wanted and respected under Arteta's expert tutelage at Arsenal, and performing wonderfully in a role that suits him perfectly, Xhaka's remarkable turnaround has been nothing short of impressive.

All it took was for Arteta to give him his trust and deploy him in a position where he can thrive. The rest has taken care of itself.