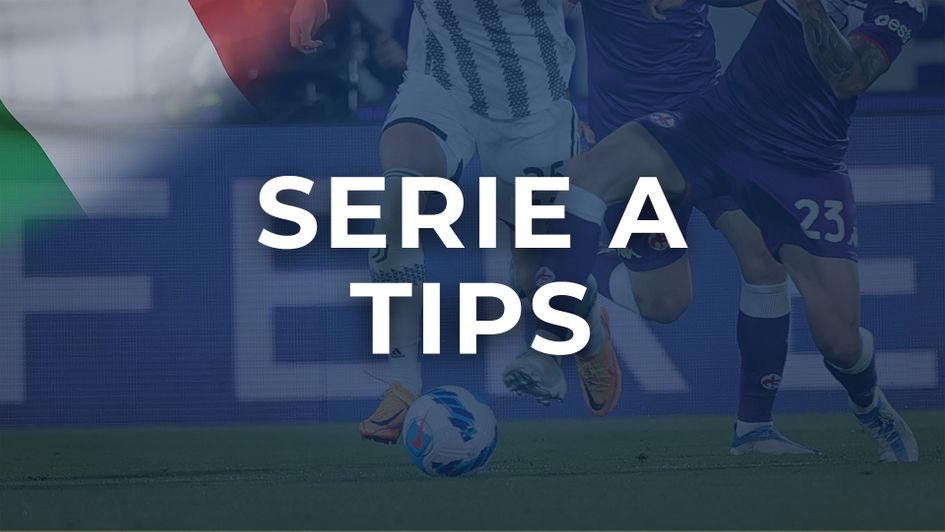 James Cantrill looks for winners from Serie A, picking out six best bets for the weekend slate.

A rotated Roma side lost in Bulgaria on Thursday to Ludogorets in their opening Europa League game.

This followed a 4-0 thumping at the hands of Uninese the previous Sunday, Jose Mourinho’s second defeat in five days having gone unbeaten in the opening four league games.

Since the Portuguese supremo took charge in Rome, his side have fared pretty well against the newly-promoted sides, only losing in one of their eight clashes with such teams.

On Monday they face Empoli, a side they did the double over last season by an aggregate scoreline of 6-2. This campaign, La Lupa have already brushed aside Cremonese and Monza without conceding.

As for the hosts, Empoli have failed to convince so far. They have drawn their last four games but still await their first major test.

Last season, they lost 60% of their games against top-half sides, so I think siding with the visitors and backing ROMA to win is the way to go here.

Italy’s most successful clubs are clear and understandable favourites. However, they are amidst a bit of an injury crisis that saw PSG go off at 1/3 in their Champions League clash on Tuesday.

I am not for one minute saying the Old Lady will lose here, but I do think they are a touch short, especially when considering how tricky fixtures sandwiched between Champions League games can be.

Staggeringly, a third of Salernitana’s goals came via set piece last term - the largest percentage of any side in Italy’s top flight.

One of their most formidable forces is veteran defender Federico Fazio. He only scored one goal but averaged exactly one shot per 90 minutes, racking up 16 in total.

He has started this season in a similarly dominant vein. The Argentine has already had eight shots (half of last season's total) and, though he does still await his first goal, he has generated an xG of 0.91. 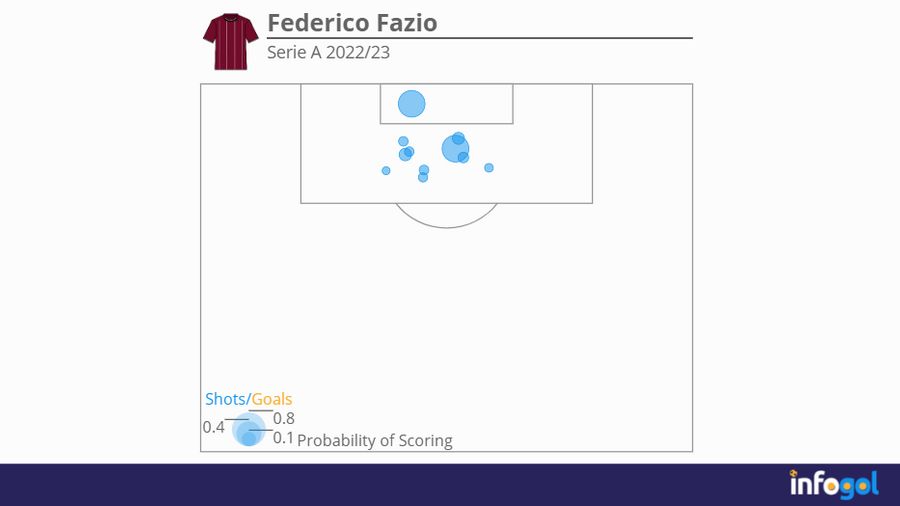 That means he is averaging 0.18 xG per 90 minutes. There are other factors worth considering, but based on this alone, there is certainly some juice in FEDERICO FAZIO's price TO SCORE ANYTIME.

Surprisingly, no side has conceded a greater xG from set pieces than Juventus’ total of 1.86 this season. Last season, only Verona (30%) conceded a higher proportion of goals from SP's than Juve’s total of 27%.

This weekend's Serie A action commences in Naples, where Luciano Spalletti's side will look to extend their unbeaten start to the season for the visit of Spezia.

Five games into the Scudetto and Napoli sit second in Serie A on 11 points. One of only four sides in the division, alongside Atalanta, AC Milan and Juventus, yet to taste defeat.

At 2/7 favourites, the bookies clearly do not fancy the Aquilotti to put an end to this impressive start, so I think the play here is to try and side with the hosts in some capacity.

Combining a NAPOLI win with the game to feature UNDER 4.5 GOALS keeps the hosts onside, covers six score lines and boosts the price to 7/10.

Gli Azzurri are short, but with good reason having brushed aside the majority of the basement boys with ease since the start of last campaign.

In their 12 games against the bottom six last season, Napoli won 10, with their 4-1 win over Salernitana the only victory not seeing this bet click.

On the flip side, Spezia do not fare so well against Italy’s big boys. Since the start of last season, their record against the top six of AC Milan, Inter, Napoli, Juventus, Lazio and Roma reads - played 14, lost 13, conceded 34.

Backing Spezia to lose and the game to feature four goals or fewer would have landed in over 71% of those fixtures, and all bar one of those games were away from home, which includes a 2-0 defeat at the San Siro and a 3-0 defeat in Turin this campaign.

Only Atalanta have picked up more points than Saturday’s hosts, but one chart they do top is goals from set pieces with four, taking their tally from dead ball situations to 20 since the start of last season.

With two goals to his name already, central defender KIM MIN-JAE is enjoying the impetus his side put on set pieces, and has already doubled his tally from last season at Fenerbache.

The South Korean international is averaging just under a shot per game and scored in his side's most recent match, a victory at Lazio. 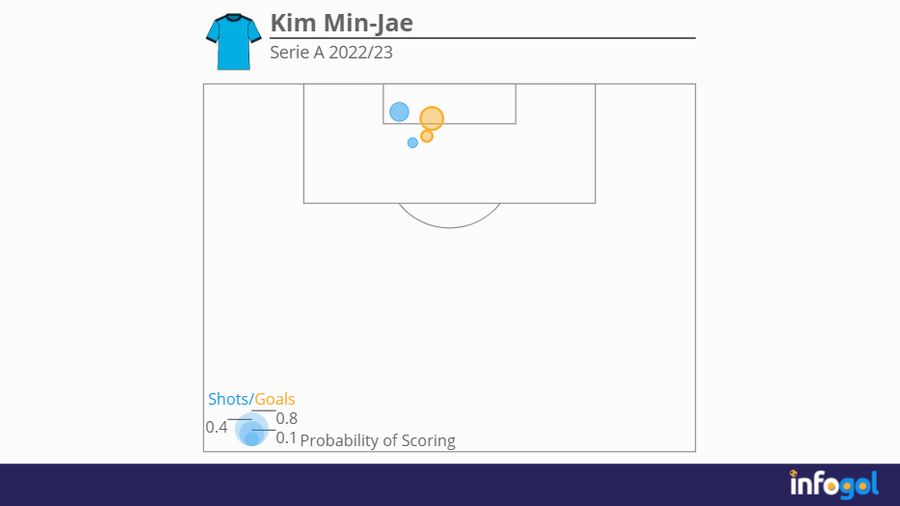 It is worth pointing out that Spezia have only conceded one goal from set pieces this season, but their xGA of 1.58 from them is the fourth highest tally in the division.

It would be remiss of me not to include a player booking while previewing the weekend's action in a league rife with tenacity, petulance and gamesmanship.

Giovanni Ayroldi has the whistle for Inter Milan’s game against Torino. He is one of the most card-happy referee’s Serie A has to offer. In 21 appearances, he has averaged over five per game, which includes the seven he dished out in the only game he has overseen so far this campaign.

No player in the Italian top flight has picked up more bookings than Inter’s MARCELO BROZOVIC (3).

The Croatian midfielder has made 238 appearances domestically, picking up 69 yellows and two red cards in that time. Based on that cynical record, I would have him much closer to 2/1 in this fixture, so backing him TO BE SHOWN A CARD appeals here.

This clash combines one of the more formidable referees with one of the league's most poorly disciplined players. So the 10/3 about the Brozovic card is the play for me.

AC Milan head to the Marassi in the final bit of Serie A action on Saturday, facing Sampdoria.

The hosts languish in 18th, the wrong side of the dotted line, having failed to win so far this season. However, they have had a tough run of fixtures.

Marco Giampaolo’s side have held Lazio and Juventus to draws, both of which finished in the top six last campaign. Their opening day defeat came courtesy of current leaders Atalanta and, according to the underlying data, the 4-0 scoreline flattered Salernitana, who only won the xG battle by a 0.20 difference.

SAMPDORIA have averaged 11.6 shots per game this season, so backing them at 11/8 to have 11+ TOTAL SHOTS could have some juice.

Sampdoria have hit this line in three of their five first games, including their opener v the Nerazzurri, and fell one short against Lazio.

Last season, against the sides that finished in the top six, they hit this line in all bar one of their home games, attempting 85 shots in those six games.

It is also worth pointing out the Rossoneri have shipped an average of 10.4 shots per game this season.