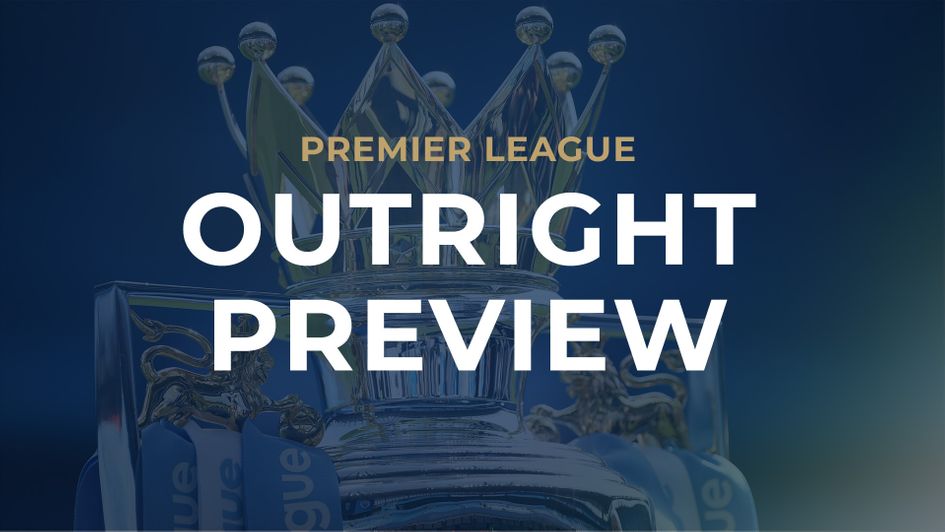 Jake Osgathorpe finished the 21/22 Premier League season with a profit of +40.4pts. He delivers his best antepost bets at the top of the table for the upcoming campaign.

2.5pts Crystal Palace to finish in the top half at 5/2 (General)

The Premier League is back.

We are getting under way slightly earlier than usual due to this year's winter World Cup, but the best league in the world will be welcomed back with open arms.

Last season was a thrilling one, with the title going down to the last game of the season, a fierce battle for fourth between north London rivals Arsenal and Tottenham, and the relegation scrap also being decided in gameweek 38.

Let's hope for more of the same shall we?

Anyway, that's enough spiel from me, as I'm here to select my best outright bets for the upcoming campaign.

It makes sense to start right at the top, with Manchester City looking to win their fifth title in six seasons, and Liverpool looking to push them all the way yet again.

Who will win the Premier League title?

In terms of the 'Winner' betting, the bookies make it a two-horse race, with Manchester City strong favourites around the 4/7 mark and Liverpool 9/4 second favs - third best being Tottenham right out at 14/1.

For as much as Spurs have improved under Antonio Conte - more on that in a moment - and Chelsea's mini-overhaul this summer, I'm still under the impression that this season's title will again be fought out by City and Liverpool.

Pep Guardiola and Jurgen Klopp have set a new standard in the English top flight, with their teams performing at incredible levels last term - with more of the same expected this season. 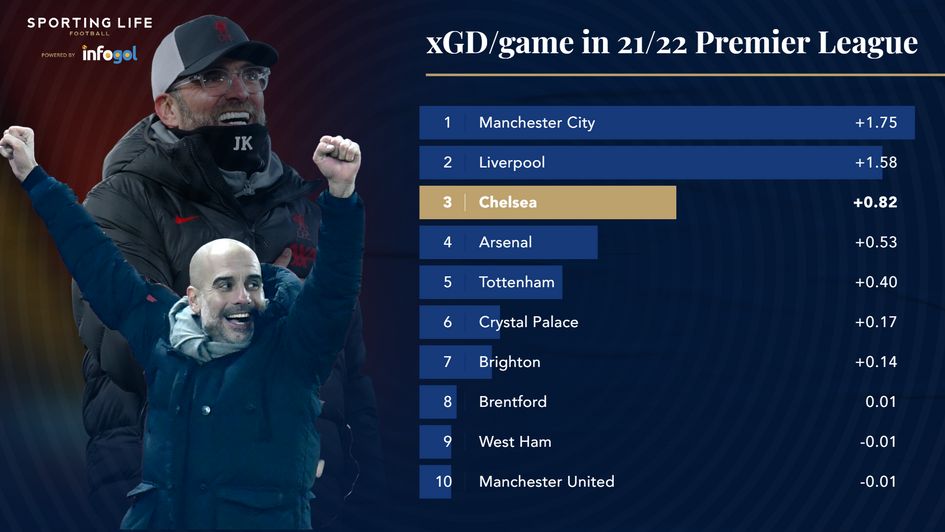 That is a huge amount of ground for the rest of the league to make up, and I don't see a reason why both City and Liverpool won't find the same levels.

All of that means I think it will be the same two teams at the top, but with the Citizens prevailing again, making the MAN CITY/LIVERPOOL STRAIGHT FORECAST the opening selection of this preview.

Defence usually wins titles, and ultimately City are the best defensive team in the land - and have been for some time.

In fact, ever since Pep Guardiola took charge at the Etihad, City have posted the best defensive process (xGA per game) in every season. 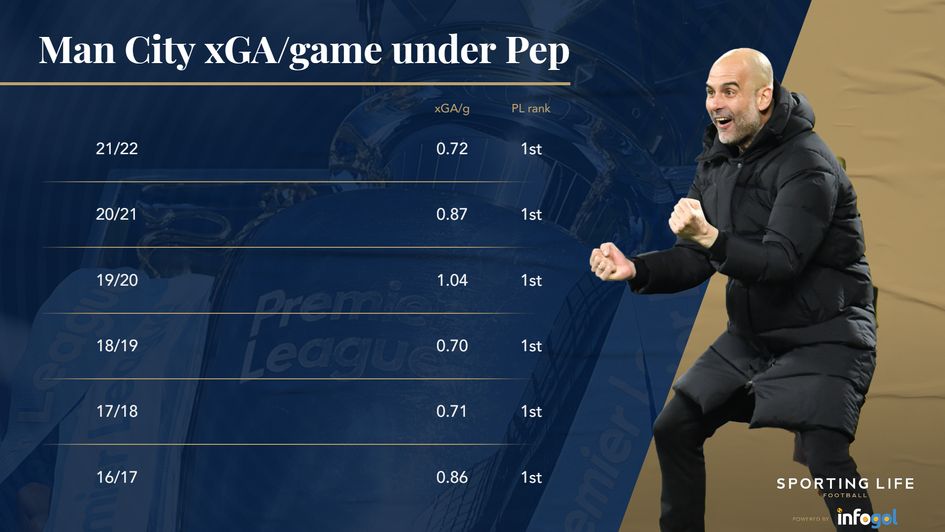 Pep's side are so well drilled. They win the ball back quickly and dominate possession meaning their opponents rarely create chances.

That is where they have the edge on Liverpool. The Reds are arguably the more reliable attacking side, but there are doubts defensively compared to City.

Adding Erling Haaland only strengthens my opinion that City will clinch another title.

Who will finish in the top four?

Chelsea and Tottenham were the sides who made up the Champions League places last season, and I'm banking on a repeat.

In fact TOTTENHAM TO FINISH IN THE TOP FOUR takes the crown as my most confident selection at a best price of 4/5.

Antonio Conte is a genius. It's as simple as that.

Spurs now have an elite coach with a winning mentality and proven track record. He has been backed by Daniel Levy, meaning fellow top-flight teams should be worried.

With a mediocre squad last season, Conte turned Tottenham's fortunes on their head, with their xGD per game transforming from -0.55 under Nuno Espirito Santo to +0.91 under the Italian. 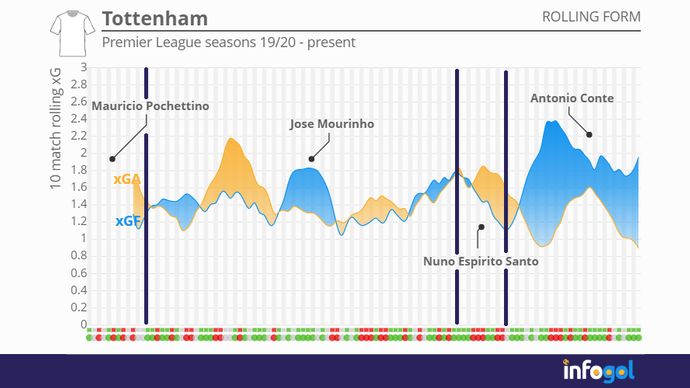 By the end of 21/22 their underlying process was at its highest level since the 2017/18 season, and there is plenty of reason to believe it will only get better, making clinching a top four berth a more straight forward task this time around.

The signings of Djed Spence, Clement Lenglet, Yves Bissouma, Richarlison and Ivan Perisic strengthen both their starting XI and squad, with all five players perfectly suited to Conte-ball.

I'm incredibly excited to see what Spurs can do this term, and think they are a lock for the top four given everything discussed.

Chelsea performed at solid levels last term to finish third, and in Thomas Tuchel also have one of the best managers in the world, which should be enough in itself (along with a steady summer) to see them finish in the top four yet again.

Arsenal's young squad - alongside some decent business - will improve for another season while it's anyone's guess what Manchester United will do under Erik ten Hag.

Those traditional 'big six' sides should again make up the top six, but there is value in the 'without big six' market.

Invest in the Irons

With the injection of money at Newcastle, and the improved results that followed post-January, the Magpies are the favourites to win the league without the big six this season.

I think that is wrong, and is massively underestimating a West Ham team who have been consistently brilliant over the past few seasons - winning the league without the big six last campaign and finishing second the season before.

They look overpriced for a repeat this season, making WEST HAM TO WIN THE LEAGUE WITHOUT THE BIG SIX appeal.

David Moyes' side, somewhat ironically, missed out on Europa League football last season by prioritising the Europa League, with their league form dipping as they concentrated on a deep European run.

They had a thin squad so couldn't cope with the demands of Thursday-Sunday without heavy rotation, but they have brought in bodies this summer, with more set to follow.

The well-drilled, well-organised side are a nightmare to play against given their physicality and that tried and trusted process is likely to reap reward again.

Newcastle haven't yet done any super flashy business that makes me think they will contend in this market, while third favourites Aston Villa were just too easy to play against at the back end of last term.

Fourth favourites Leicester will have their backers at a decent price, but their defensive process was utterly abysmal last season and needs rectifying drastically.

Eagles to soar into top half

Scouring the rest of the markets, one bet stands out at the prices as being slightly too big.

It appears as though Crystal Palace are being underestimated again this season, with the Eagles in the relegation betting mix last season.

Patrick Vieira has simply revolutionised Palace, both on the eye-test and the spreadsheets.

The Eagles have gone from playing a deep-block and counter-attacking under Roy Hodgson to playing in a more proactive and attack-minded approach, integrating more youth in the process.

Their xG process from Hodgson in 20/21 to Vieira in 21/22 could hardly be more polar opposite. 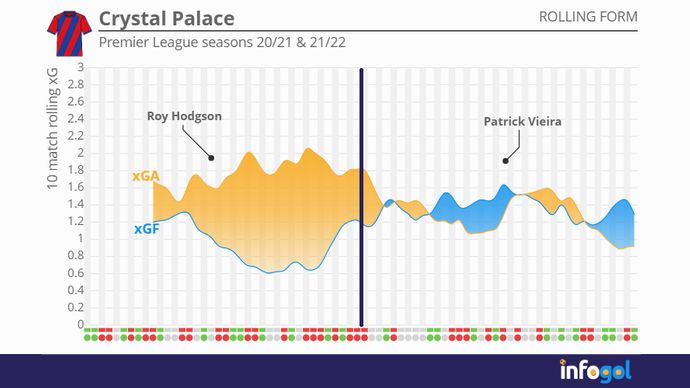 It feels as though the Frenchman still isn't quite getting the credit he deserves for the job he's done so far, and if the Eagles continue to trend in the same direction this season, they will again be looking up rather than down.

Given they ranked as the sixth-best team in the league last season according to Infogol's xG model, maintaining a similar process should see CRYSTAL PALACE FINISH IN THE TOP HALF this time around.

They are a team on the up. With City, Liverpool, Spurs, Chelsea, United, Arsenal and West Ham fancied to make up the top seven, we have three places up for grabs, and I'd rate Palace higher than Newcastle and Leicester, and on par with Brighton.

Newcastle are a 4/11 shot to finish top half, Leicester 8/11 and Brighton 6/5, so the 5/2 available about Palace in the same market is most certainly worth a wager.