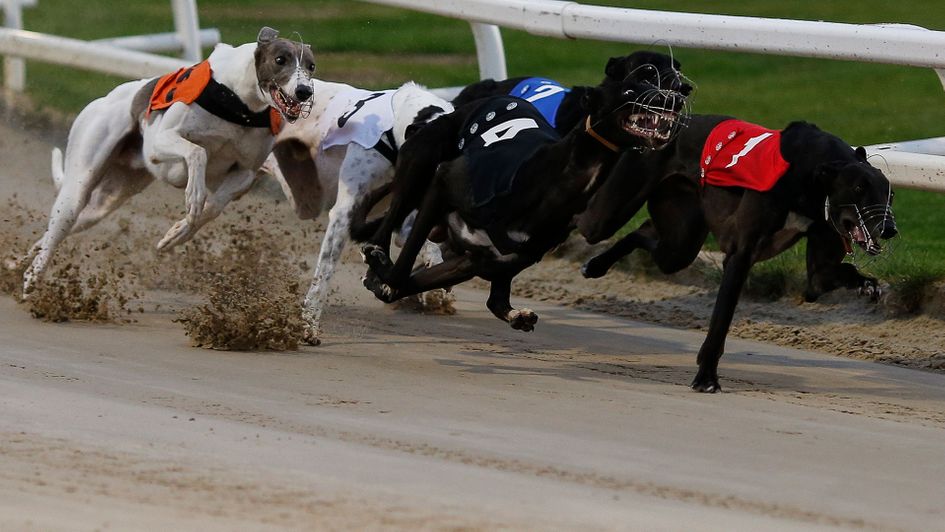 On an ordinary day, Kildare would be an easy call given the likelihood of securing first run from this location and with Priceless Jet likely to initially plot a path inwards from the wide draw. However, this is no ordinary occasion and when your chance rests upon a big break and anything less than perfection can expose vulnerability, appeal diminishes. Romeo Magico has plenty to like about him and a repeat of his quarter-final effort makes his competitive but HELLO HAMMOND has done enough in recent weeks to suggest he can position himself in the right place at the right time, and if turning handy, he can overhaul the pace angles. 3-2-6

Trap-by-trap guide to the Greyhound Derby (9.15)

Lot 25 of March’s Greyhoundtrader Sales arrived at Towcester with a fair shake of selling as he’d won a couple of graded races at Clonmel and Shelbourne Park, but there was still some surprise that Kevin Boothby went to £13,000 to purchase the dog out of Graham Holland’s kennel.

The then-“Riverside Beau” may prove to be a shrewd investment as the track promoter will scoop a minimum of £5,000 in addition to his earlier prize monies.

The red jacket has been viewed as a bogey in recent finals though the son of Clonbrien Hero is different from previous incumbents as he does not rely upon smashing down the bars to establish his track position.

Outsiders do win Derby finals and though Savana Beau will make progress in the second half of race, barring accidents, the leaders may have got too far away.

It’s a joy for any family to own one Classic winner but Aidan Comerford will bid to match the achievement of his brother, Peter, who landed the Irish Derby in 2021 with Susie Sapphire.

Peter Cronin has had a history of reaching Derby finals with lesser-fancied sorts and essentially little expectation but this son of Droopys Sydney has always been whispered about as being a potential superstar and his entry in the Kirby Memorial suggested it wasn’t just idle talk.

Having drawn in one for the majority of the competition, Kildare has naturally edged out right and repeated this when allocated this spot in the semi-finals. The result being his fastest sectional of the campaign so far and if he reproduced that here, this would ask questions of the rest.

However, he’s the youngest dog left in the competition and has been travelling back-and-forth to Ireland between rounds. As Ballymac Fairone showed in last year’s Derby – inexperience can often be exposed cruelly when it comes to handling the associated hullabaloo of a Finals night.

Largely unheralded ahead of the Derby, it's fair to say that Hello Hammond is far from a greenhorn as far as racing is concerned but he’s in good hands as Paul Hennessy has trained a pair of winners of the prize in the past.

He actually raced at Towcester last year’s Derby and exited in a particularly hot opening round heat, but a year is a long time in greyhound racing and though some would pigeonhole the son of 2016 champion, Jaytee Jet, as being about finishing speed, that would be a sloppy assertion to make.

His first start from trap three saw him realise a 4.16 sectional where he was able to get out front before what is now his almost trademark swing right at the opening pair of bends.

Granted, there’s work to be done on the clock but he stays well and if reproducing anything like the effort he put up in the semi-finals of the Shelbourne Park 600, there would be very few genuine four-bend dogs that could live with him.

Dave Firmager has been an owner, breeder and sometime-trainer of greyhounds for a considerable period and the window manufacturer will be hoping that Graham Holland can finally smash the glass ceiling that has seen him hit the target on three occasions in Ireland but rattle the woodwork with regularity in the English equivalent.

Romeo Magico was a finalist in the Easter Cup and came through the preparatory route of one of the Towcester Derby trials. His campaign has been something of a slow burner chiefly due to meeting bother in two of his first three runs, but as the competition has continued, he has ripened with each run and his fastest sectional to date was registered from this trap.

A heavyweight performer (he tipped the scales at 37.5kg last week), he did miss the kick last weekend but in mitigation, there was plenty of movement in the boxes. That was the second occasion he’d served up a 4.27 sectional and he cannot afford to do that here for a third.

What’s in a name? Well actually quite a lot.

A syndicate were to buy a dog to honour a deceased friend only to discover that they were unable to rename said dog as that had already taken place once in his career. Cue a substitute purchase and in a quirk of fate, it’s this “Mickys Barrett” that has made his way into the final of the greatest competition of all.

Not since Kinda Ready won at Wimbledon in 2009 (also from trap five) has there been such a buzz around a “syndicate” dog and he has done the 64 members proud. Each investing just £100 in the dog and their vociferous enjoyment easily surpassing any economic measure.

As the only remaining middle seed, this was always going to be his box and two early round successes have been followed by three places – the latter obtained in the fastest of his five starts. The heart would love to be with the little guys against the game’s goliaths but there will be no margin for error from this draw.

Priceless Jet has often polarised opinion with the punters regarding his attitude but it would be interesting to note how many of those nay-sayers would love to own a dog that has won a Corn Cuchulainn and reached the finals of the Irish St Leger, Easter Cup and Champion Stakes within the space of a calendar year.

Even his most vociferous advocate would not have suggested he’d be coming into this race off a track record performance in the quarter-finals yet flying the lids in a 4.12 sectional and with just sand between himself and the lure, conditions were perfect.

A wide seed won last year’s Derby and Paul Hennessy’s dog is noteworthy in that while he is undoubtedly a wide runner, he does edge left in an effort to pace up and cut the opening bend.

That’s problematic for rivals when there’s 35kg of primed athlete careering your way and would heavily influence the outcome of this prize if he gets far enough across to trouble the fancied runners.

Stamina is no issue but perceptions are big things when forming markets and that’s why he isn’t trading as favourite despite proven Grade 1 form on the board.

How we got here

After five frantic weeks of competition, six greyhounds will head to the traps on Saturday evening at Towcester for the £175,000-to-the-winner StarSports & TRC English Greyhound Derby Final.

The Irish appear dominant with four of the remaining participants but it's worth remembering that just as things appeared sure to go the way of the raiders last July, it was the home team that saved its best for last.

Knockout racing can always bring about its share of unexpected results and this year’s competition has been no exception. Having rewatched back all of the performances, I actually believe you could suggest each of the finalists has had a “sliding doors” moment along the way.

Kildare fortuitously placing his head down on the line to dodge elimination in the third round, along with Hello Hammond’s effort to stay on his feet in the second round proving the old adage that the Derby is truly about qualification.

The weather on Saturday is likely to be cool with only a minor chance of rain and we have a fine supporting card to go alongside with our main event.

The evening will commence with a Veterans Invitational (18:04) where Faughan Rebel is set to make his last competitive appearance. A fine servant to connections, he made it to the semi-final stages of this year’s Derby.

The Jack Murrell Memorial Trophy (20:21) has drawn a high-class field and Signet Goofy, who was eliminated from the Derby after a flawless run to the semi-finals, is likely to go off as favourite. There are four other Derby heat winners in opposition including 2021 Greyhound of the Year, Signet Ace, but I’m hoping Bockos Budsit can produce a shock.

Graham Holland’s dog blew the start in the opening round of the Derby and duly paid the penalty but he has subsequently won the Race Of Champions at Tralee in convincing fashion.

Away from the invitational races, the RPGTV Derby Plate (20:40) sees a renew of rivalries between Innfield Trojan and Chelms Fred.

Tom Heilbron’s charge that was to prevail in the semi-finals but the pair have been drawn the opposite way around on Saturday so supporters of John Mullins’ dog will believe there’s a chance of turning the form around.

Romeo On Tilt will have to defy a higher than ideal draw in the Final of the British Bred Champion Stakes (19:48) but that’s unlikely to put the locals off Patrick Janssens’ inmate. Kevin Hutton could provide a headache for his fellow Derby winning trainer as he has three finalists including litter siblings Moment Of Magic and Sleek By Design.

The night closes with the Dorando Marathon (21:55) and last year’s winner Savana Volcano aims to defend her title.

Diane Henry’s bitch beat marathon superstar, Aaymza Royale, on that occasion and she’ll need to lower the colours of another champion in Space Jet. Matt Dartnall’s bitch was imperious in the TV Trophy at Hove and added a track record into the mix for good measure.