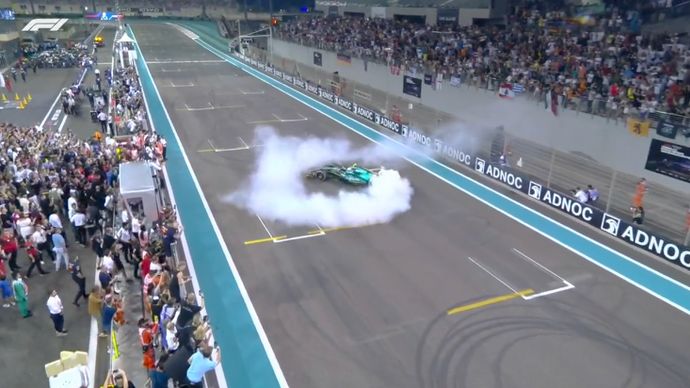 Max Verstappen completed his championship year by taking a record-extending 15th victory at Formula One’s season-ending Abu Dhabi Grand Prix – as Lewis Hamilton’s record of winning in every season of his career went up in smoke when he retired with three laps remaining.

Verstappen finished 8.7 seconds clear of Ferrari’s Charles Leclerc, who made a one-stop strategy work to secure runner-up spot in the standings, ahead of Sergio Perez.

The Red Bull driver stopped one more time than Leclerc, but failed to catch the Monegasque in the closing stages and finished third.

Carlos Sainz was fourth for Ferrari with Hamilton’s team-mate George Russell fifth leaving Mercedes behind the Italian team and third in the constructors’ championship.

The Dutchman, who broke a record he shared with Michael Schumacher and Sebastian Vettel by taking his 14th chequered flag at the Mexican Grand Prix, ended his second successive title-winning campaign on another high.

1️⃣5️⃣ wins in a season for Max Verstappen! 🔥 pic.twitter.com/3TQ6y3Cyr8

The race also marked the end of Vettel's career and he delighted the millions of fans watching around the world with a farewell donut following his 10th placed finish.

Verstappen snatched victory from Hamilton a year ago to claim his maiden title in the most contentious of circumstances.

But the Dutch driver has been the standout performer of 2022 and his win here under the thousands of bulbs that light up the Yas Marina Circuit was his 15th from 22 appearances.

Hamilton left Abu Dhabi at the end of last season pondering if he would ever return, so aggrieved was he by Michael Masi’s officiating of the decider which cost him a record eighth crown.

The seven-time world champion decided against retirement, but he will head into this season’s winter break having failed to register a single win – the first time that has happened in his career which began in 2007 – and reflecting on a DNF which summed up a sour campaign.

As Verstappen raced away from pole position to pave the way for another crushing win, Hamilton was on the move when he get the jump on a slow-starting Sainz.

On the run down to Turn 6, Sainz had a nibble back at Hamilton with the latter taking to the escape road.

Hamilton hit the sausage kerb, launching him airborne, before landing back on all four wheels and rejoining ahead of Sainz.

On lap four, Hamilton was ordered to give the place back, only to repass Sainz the next time round. But on laps eight and nine, Hamilton fell behind Sainz and team-mate Russell.

Did Hamilton sustain damage to his machine in his first-lap altercation with the kerbs?

“There is something up with the car,” he said. Moments later, he was back on the radio. “I think the floor is broken,” he said.

At the opening round of stops, Mercedes were slow to fit Russell’s right-rear tyre.

The British driver, who opened his winning account in Brazil a week ago, was released into Lando Norris’ path and subsequently hit with a five-second penalty.

Perez stopped for a second time on lap 33 of 58, with Sainz and Russell also changing rubber seven laps later.

But leader Verstappen, Leclerc, then behind Perez in third, and Hamilton remained out in an attempt to nurse their tyres to the chequered flag.

“We should have stopped, man”, said Hamilton with five laps to run, and then with three laps to go, the British driver’s gearbox gave up on him.

He limped back to the pits to retire his Mercedes machine. His failure to finish sees him end the season 35 points behind team-mate Russell.

For Leclerc, his one-stop strategy proved the correct call as he provided Ferrari with some joy following a turbulent season for the Italian team.

Norris finished sixth for McLaren with team-mate Daniel Ricciardo ninth in his last race for the British team. Sebastian Vettel started ninth and finished 10th in his final F1 appearance.