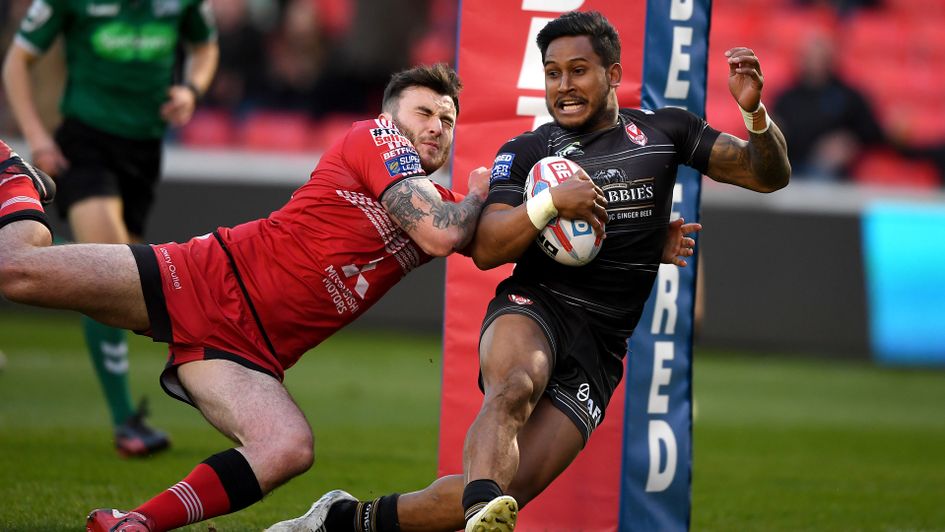 A review of the weekend's action so far in the Betfred Super League as Salford battered Catalans in Saturday's only game.

Salford secured their first win in Perpignan in eight years with a 46-0 hammering of Catalans Dragons.

The home side looked like they were still celebrating their one-point win over Warrington last weekend as the Red Devils dominated throughout.

Jake Bibby made his first start of the season, replacing the injured Junior Sa'u, and scored two tries as well as having a hand in three more.

The Red Devils opened the scoring in the eighth minute. An early scrum allowed them the field position they needed to launch an attack and, after Gil Dudson went close to the Catalans line on the last tackle, Joey Lussick dummied left and dived right to catch the Dragons defenders napping.

Ken Sio added the conversion to give the visitors a 6-0 lead and then kicked a penalty after Michael McIlorum was judged to be offside at the play the ball.

Two minutes before the break another penalty invited the Red Devils close to the Catalans line and Robert Lui put George Griffin through a hole with a short ball to score.

With time running down to the interval, Catalans looked to attack down the right-hand side but the ball went to ground and was picked up by Sio, who handed on to the supporting Jackson Hastings.

Hastings found Sio who kicked ahead and chased, but while attempting to touch down he was pushed without the ball by Lewis Tierney and it bounced loose for Bibby to score.

Sio hit the post with his conversion attempt to take the half-time score to 18-0.

Within seconds of the second half restarting Salford and Bibby were over again.

Niall Evalds offloaded to the supporting Bibby who raced 60 metres and exchanged passes with Hastings before touching down in the left corner.

Sio made it 24-0 and just five minutes later Salford were over again. A Bibby break and offload down the left and a kick ahead from Evalds found Hastings who put in Griffin, supporting on the inside, to touch down under the posts for his second try.

Hastings was the next Salford player to go over after smart play by Bibby down the left, dummying out wide and flicking the ball inside to the supporting Australian to increase the Salford lead to 34-0.

Salford continued to run riot, with Evalds adding the seventh try of the game, following up on good work by Lussick and Hastings.

Catalans' best opportunity to score came 13 minutes from time as Samisoni Langi looked to pick up and dart over from close range, but the strong Salford defence managed to hold up the half-back.

With two minutes remaining, Sio was the beneficiary of more slick handling from the Red Devils as he raced over down the left and ran in under the posts, kicking the conversion to take his personal points tally to 18.

St Helens maintained their unbeaten start to the season as they eased to a comfortable 26-0 victory over London Broncos to return to the top of the Betfred Super League table.

Saints are now the only club left with a 100 per cent start to the 2019 campaign following Castleford's defeat by Warrington on Thursday night, with Justin Holbrook's side edging two points clear of the Tigers and Wolves after the opening five games.

London had claimed a shock victory over champions Wigan Warriors in their last outing but despite a magnificent defensive effort at times at the Totally Wicked Stadium never looked like producing another upset against a Saints side, without talisman James Roby, who were always in control of the game.

Saints rested Man of Steel leader Roby which meant a first start for the club for Aaron Smith at hooker, while Naiqama returned to the side after missing the previous week's win at Salford and Jack Ashworth was also drafted in on the bench as Matty Costello and Matty Lees dropped out.

London made a whole host of changes from the side that shocked Wigan as they gave a Super League debut to Jacob Ogden, Matt Davies went straight into the side after his loan move from Warrington and there were recalls for Matty Fleming, Eloi Pelissier, Mark Ioane and Sadiq Adebiyi.

London made the worst possible start when the opening kick failed to go 10 metres and Saints needed no second invitation to take full advantage as Fages sent Peyroux over for the first try in the opening minute of the game.

To their credit the Broncos recovered from that early setback and settled into the contest and almost drew level when Elliot Kear looked to go over in the corner but was pulled back for a forward pass.

Some excellent defensive work from Danny Ward's side managed to keep their line intact despite being under some intense pressure from their hosts.

But Saints finally broke through the London resistance on 23 minutes when Coote's long pass allowed Grace to race over in the corner.

And seven minutes before half time, Saints claimed their third try when a powerful burst and clever offload by Zeb Taia allowed Fages to touch down and, with Coote kicking two first-half conversions, the home side led 16-0 at half-time.

London's excellent defensive efforts continued at the start of the second half as they again kept their line intact until the hour mark when Saints finally found a way through thanks to a midfield break by Fages who sent Coote racing clear under the posts. He also converted to stretch the lead to 22-0.

And St Helens completed the win when Naiqama crossed three minutes from time.

Hull's revival continued as they put beleaguered Leeds to the sword to earn their first victory at the KCOM Stadium since last June.

The Black and Whites have seen their form make a U-turn in recent weeks, picking up away wins against Wigan and Huddersfield to bring an end to their 13-game losing run in Super League.

Hull had another monkey to get off their back and they did it in style with a 34-10 home triumph, although such a comprehensive victory did not look on the cards early on.

Young centre Harry Newman opened the scoring with his first try for Leeds and Hull old boy Tom Briscoe made it a dream start for the Rhinos when he went over in the corner.

But Hull ruthlessly exposed the visitors' insecurities in defence as they ran in five tries in little over 15 minutes through Ratu Naulago, Masi Matongo, Marc Sneyd, Jamie Shaul and Albert Kelly.

Dean Hadley scored the only try of an uneventful second half with the points already in the bag for Hull.

David Furner's Leeds had made positive progress in outings against Salford and St Helens but went into Friday's clash on the back of a humbling defeat by Wakefield on their return to Headingley.

Furner was forced into a late change when Carl Ablett got injured in the warm-up yet watched his replacement Newman go over from dummy half to give the Rhinos an early lead.

Newman then turned provider to put Briscoe over and at 10-0 after 10 minutes it appeared Leeds had quickly put last week's disappointment behind them.

Newman and Briscoe somehow held Josh Griffin up over the line but the Rhinos' defence soon buckled as the rampant Black and Whites got their tails up.

Kelly got Hull going with a brilliant last-tackle pass that took Ash Handley out of the game and put Naulago over in the corner for his fourth try in three appearances.

Sneyd converted from the touchline and then sent Matongo through a huge hole close to the line to wipe out Leeds' advantage.

All of a sudden Hull were full of confidence and Sneyd got in on the act after backing up the rampaging Mark Minichiello to score under the posts with Leeds' edge defence in disarray.

Indiscipline was a problem for the Rhinos throughout Hull's purple patch and the hosts punished them each time they were gifted field position.

Shaul evaded Jack Walker's tackle to extend the Airlie Birds' lead and the game was as good as over when Kelly stepped back inside to touch down, with Sneyd's fifth goal making it 30-10.

Brad Singleton went close just before half-time as the Rhinos finally got their hands on the ball and they made a strong start to the second period with Furner's team-talk still ringing in their ears.

But there was to be no comeback for Leeds as Hadley scored a scrappy try to end the match as a contest.

Sorry Wigan slump to another defeat

Huddersfield recorded their first win of the Betfred Super League season with a convincing 14-6 victory over defending champions Wigan at the DW Stadium.

The Warriors looked weak in defence and clueless in attack as they crashed to their fourth successive defeat, a run which started with their World Club Challenge loss to Sydney Roosters.

The Giants led 6-0 at the break thanks to a try from Kruise Leeming, but the scoreboard failed to show how dominant they were as they had the champions on the back foot from the first minute.

Wigan looked lost and Lee Gaskell and Matt Frawley took advantage of that as they controlled the game effortlessly in the opening 40 minutes.

The hosts managed to hit back in the second half with a try from Morgan Escare, but they were unable to kick on and Joe Wardle ensured the points went back to Yorkshire with Huddersfield's second try after 66 minutes.

Huddersfield, who opted to bring back Gaskell, Joe Wardle and Akuila Uate, started the strongest and had the Warriors on the ropes for the opening 10 minutes as they forced three dropouts to camp out in Wigan's half.

The visitors deservedly went ahead after 12 minutes when Leeming finished off a fine move involving Aaron Murphy, Frawley and Ukuma Ta'ai. Gaskell added the extras as the visitors led 6-0.

Wigan were once again underperforming as the Giants dominated possession, but the home fans were soon on their feet as Zak Hardaker broke from inside his own 20 and looked certain to score his first try for the Warriors. However, he was chased down and thwarted by a great tackle from Darnell McIntosh.

The Giants should have extended their lead before the break as Jermaine McGillvary headed for the line only to be brought down by a great double cover tackle from Hardaker and Oliver Gildart, while video referee James Child judged that Suaia Matagi had lost control of the ball as he attempted to score.

Wigan improved after the break and they were level after 53 minutes when Escare raced ahead to collect a Thomas Leuluai kick to go under the posts, with Hardaker converting to make it 6-6.

Wigan were the better team now with Willie Isa causing problems down the right and Joe Bullock going close, but they had to spend 10 minutes with a man down after Taulima Tautai was sinbinned for kicking out. Gaskell slotted over the penalty to make it 8-6.

The Warriors were left having to do it the hard way with 12 men and only one available substitute following injuries to Dom Manfredi, Liam Marshall and Sam Powell.

And they were to be left empty-handed once again as Huddersfield, who were outstanding all evening, pushed on.

Uate went close to increasing the Giants' lead before they finally got the second try their performance deserved as Joe Wardle went over from close range. Gaskell's conversion put them eight points ahead with 15 minutes to go and sealed a famous win.