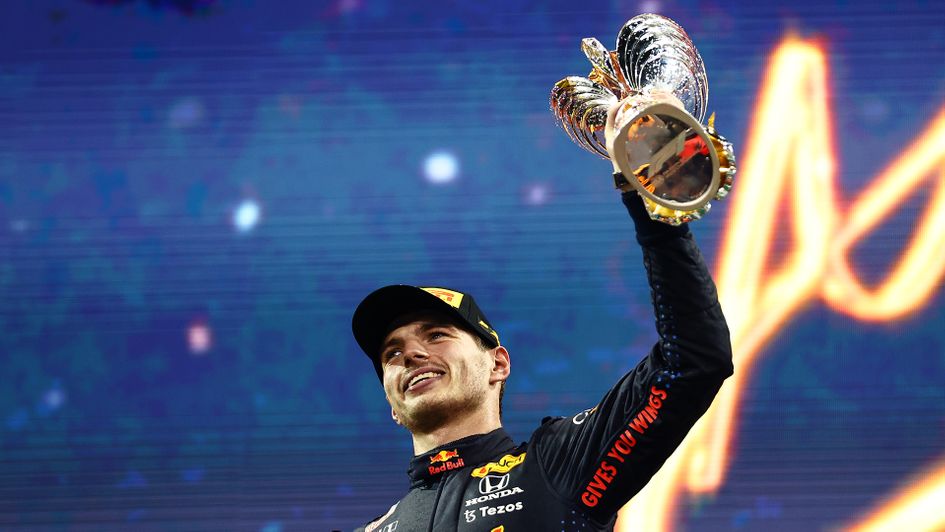 Max Verstappen secured the F1 Drivers' Championship after winning the Abu Dhabi Grand Prix on the final lap ahead of rival Lewis Hamilton.

Max Verstappen was eventually able to celebrate his maiden Formula One world championship after two appeals from Mercedes were rejected by race stewards following the Dutchman’s thrilling last-lap victory at the Abu Dhabi Grand Prix.

The Red Bull driver stormed past title rival Lewis Hamilton in the closing stages of the season-ending race at the Yas Marina Circuit, having benefited from a late safety car that bunched up the pack.

Hamilton appeared to be charging to glory, easily holding Verstappen at bay in the closing laps only for a crash for the Williams of Nicholas Latifi to change the course of events.

Confusion reigned as under-fire race director Michael Masi changed his mind to allow lapped cars to pass the safety car, meaning Verstappen had a clear run at Hamilton in the final lap and on much faster tyres.

The Dutchman broke into tears as he crossed the line, professing his love for his team and sitting by his car after bringing it to a stop.

🤯 Lewis Hamilton was on the brink of a record EIGHTH world title, then Max Verstappen pinched it in the most controversial and dramatic of finishes...#AbuDhabiGP pic.twitter.com/FazFjLsiq8

Mercedes immediately launched two appeals against the result, one against Verstappen for allegedly overtaking under a safety car and a second claiming a breach of rules regarding race restarts following a safety car period.

Both were dismissed after the two teams spent hours in the stewards’ office, Verstappen able to toast his title more than four hours after crossing the finish line.

On the first issue, Red Bull successfully argued Hamilton had not been overtaken by Verstappen but that both were “on and off the throttle” in preparing to restart the race.

The stewards agreed, finding that Verstappen had passed at one stage but had moved back behind Hamilton before the safety car period came to a conclusion.

The title would ultimately not be decided by telemetry but terminology as the second appeal from Mercedes was also not upheld by the stewards, meaning that – pending any further appeal to the Court of Arbitration for Sport – Verstappen kept his world championship.

That second appeal referred to an alleged breach of article 48.12 of the FIA regulations.

“That notwithstanding, Mercedes’ request that the stewards remediate the matter by amending the classification to reflect the positions at the end of the penultimate lap, this is a step that the Stewards believe is effectively shortening the race retrospectively, and hence not appropriate.”

The documentation also said: “Article 15.3 allows the race director to control the use of the safety car, which in our determination includes its deployment and withdrawal.”

Asked if he was relieved, the driver told Sky Sports: “Very, (it was) a very stressful day.”

Horner, who had also been unable to hold back the tears when Verstappen crossed the line, was pleased to see the result stick.

“Disappointed we had to go through that,” he told Sky Sports.

“I think it also sums up a little bit this season,” Verstappen had earlier replied when asked about the Mercedes appeals during a somewhat solemn champions’ press conference hours before his title was confirmed.

Representatives of both teams spent 45 minutes with the stewards, taking a short break before heading back to the room to continue the appeals process.

Out on the track earlier in the day, Hamilton had looked on course for a record eighth championship after passing pole sitter Verstappen off the line.

The Briton started alongside his fellow title protagonist on the front row and was quicker off the mark, leading the race into turn one of the reconfigured track. 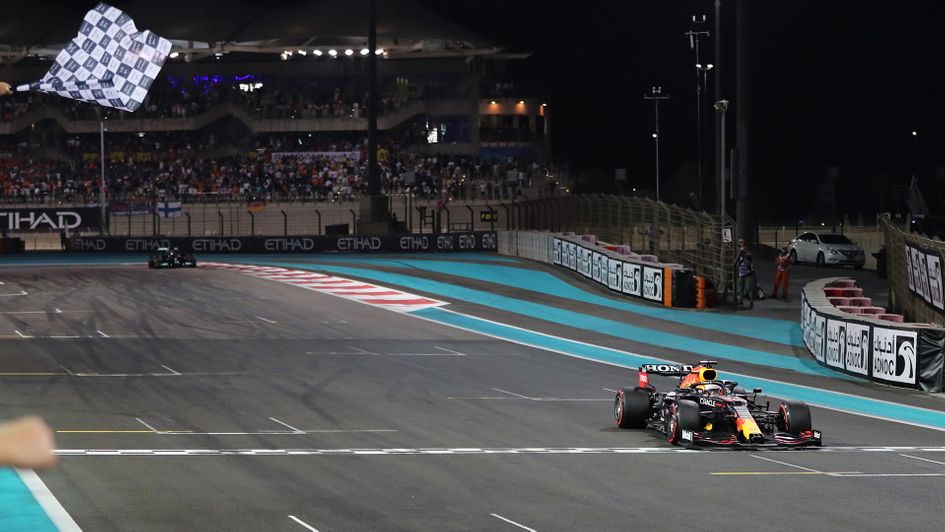 Those alterations were made to improve overtaking here and Verstappen attempted to take full advantage of the widening of the hairpin at turn seven as he lunged to try and regain his lead.

Hamilton went off the track as a result, rejoining having missed the turn, but it was deemed he had no case to answer as a season punctuated by collisions, near-misses and contradicting stewarding calls looked set for another twist.

The near-miss was all Hamilton needed to know he needed to scamper down the road to avoid any further incidents, aware that if he and Verstappen were both not to finish the title would go to his adversary by virtue of more race wins.

He was not to have it all his own way, however, as he came into the pits on lap 15 to avoid being undercut by Verstappen but emerged behind the sister Red Bull of Sergio Perez, who was given instructions to hold up Hamilton.

The Mexican did just that, costing Hamilton over six seconds as the tussled for the lead, Verstappen closing in and praising his team-mate as a “legend” over the radio.

Once clear, though, Hamilton once again showed his outright pace to start rebuilding the gap he had lost stuck behind Perez.

Horner admitted the team needed a “miracle” with the gap at 11 seconds with 10 laps remaining – and they got one when Latifi crashed into the barriers. It brought out a safety car with just five laps remaining and Verstappen stopped for a third time and got new tyres.

Time, however, appeared to be on Hamilton’s side as the laps ticked down behind the safety car and Masi opted to keep the five lapped cars between the leader and Verstappen in place.

He then changed tact, sending the quintet past Hamilton and the safety car meaning there was nothing between the title rivals as the pace car peeled off with just a single lap remaining.

Verstappen was ready to pounce and did so, although Hamilton kept fighting until he had nothing left to give.

As the unbelievable action unfurled on track, Mercedes team boss Toto Wolff fumed at Masi over the radio for his change in decision.

But his appeals would ultimately be rejected and – albeit with the caveat of potential further appeals to follow – Verstappen was able to leave Abu Dhabi the champion.

Verstappen broke into tears as he crossed the line, professing his love for his team and sitting by his car after bringing it to a stop: “This is unbelievable guys. Can we do this for another 10 to 15 years together,” he said.

He told Sky Sports: “It’s unbelievable. I kept fighting the whole race. I had the opportunity in the last lap. It’s incredible, I’m still having a cramp. It’s insane.

“These guys, my team, they deserve it. I love them so much. I’ve enjoyed working with them since 2016 but this year has been incredible.”

Red Bull boss Horner said Verstappen had needed a miracle to win the world championship with 10 laps to go.

Verstappen said: “Finally a bit of luck for me. It was great teamwork.

“My team know that I love them and there’s no need to change ever. I want to stay with them for the rest of my life.

“Christian trusted me to be in the team in 2016 and our goal was to win this championship and now we have done that.” 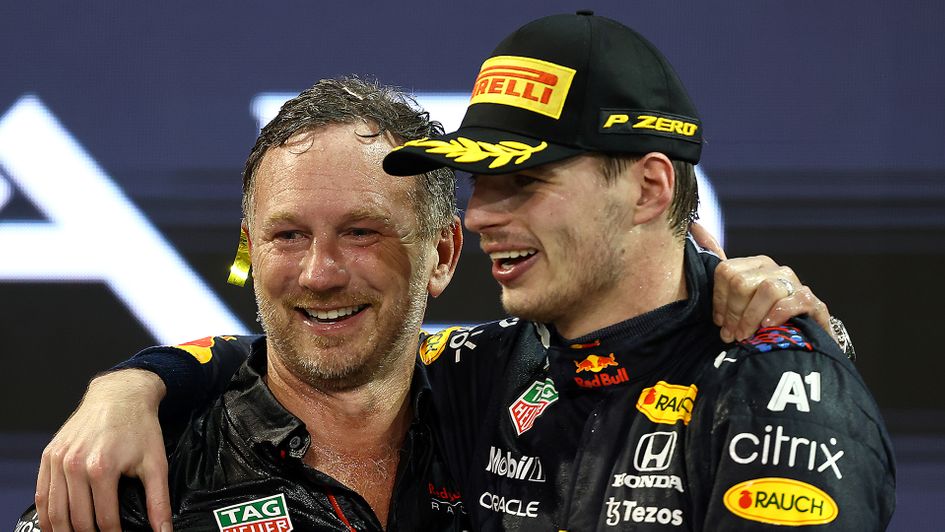 Hamilton paid tribute to Verstappen and said he had given everything possible to win his eighth world title.

He told Sky Sports: “Congratulations to Max and his team. I think we did an amazing job this year.

“Everyone back at the factory and here worked so hard in this most difficult of seasons. I’m so proud of them and so grateful to be part of the journey with them.

“We gave it everything this last part of the season, we never gave up.”

Verstappen paid his own tribute to Hamilton after his last-lap success in Abu Dhabi.

The Dutchman said: “Lewis is an amazing driver and an amazing competitor. They really made it hard for us and everyone loved to see the two teams running against each other.

“We had some tough times but that’s all part of the sport and its emotion. Everyone wants to win and it could have gone either way.

“I tried to keep on pushing and sometimes miracles happen. Next year we’ll come back and try all over again.”

George Russell reflected on an “absolutely unacceptable” conclusion to the race.

British driver Russell, who is due to join Hamilton at Mercedes in 2022, said on Twitter: “Max is an absolutely fantastic driver who has had an incredible season and I have nothing but huge respect for him, but what just happened is absolutely unacceptable.

Former world champion Damon Hill, speaking on Sky Sports, said: “If they (Mercedes) can prove the rule was wrongly applied then they have got a case, but I don’t think any of the regulations are blindingly clear.

“Unfortunately, messages were coming out (from the race director) that were contradictory.

“I do think this championships has been run in a different way – they have tried to let the racing happen and race on track to the very end.”