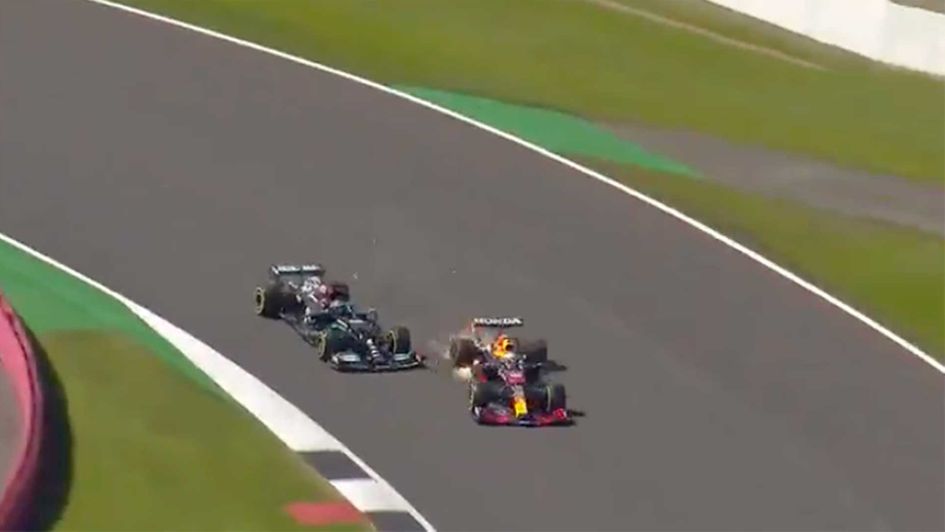 Scroll down to watch Lewis Hamilton crash with Max Verstappen

Did Lewis Hamilton put Max Verstappen’s life at risk with this crash?

Lewis Hamilton delivered a remarkable comeback to win the British Grand Prix after he was accused of putting Max Verstappen’s life on the line when Formula One’s championship rivals crashed at 190mph.

Hamilton passed Charles Leclerc with only two-and-a-half laps remaining of a thrilling race after the Ferrari driver ran out of road on the exit of Copse in front of a 140,000 spectators on a sizzling afternoon at Silverstone where this season’s title battle boiled over.

Hamilton was hit with a 10-second penalty for a terrifying lap-one shunt which saw Verstappen’s afternoon end in the barriers and subsequently hospital.

The title rivals come together at Copse, pitching Verstappen into a high-speed crash.

The Dutchman was able to walk away but he has been taken to hospital for precautionary checks#BritishGP 🇬🇧 #F1 pic.twitter.com/ol1s9dRJoa

But his stunning win – his eighth on home turf – moved him to within seven points of Verstappen on a remarkable afternoon.

Hamilton jumped out his Mercedes and leapt over a barrier before waving the Union Flag in front of the packed grandstands.

“It is massively overwhelming,” the seven-time world champion said. “It was such a physically difficult race with the best crowd. A home crowd is the best. It is a dream to do this in front of you all.”

Reflecting on his collision with Verstappen, he said: “I have been giving my all this week. I always try to be measured in battles with Max and he is aggressive.

“I was fully alongside him and he did not give me the space but regardless of whether I agree with the penalty I was not going to let anything get in the way of the national anthem and the British flag.”

😲 It's also his record-extending 99th Grand Prix win from 275 starts, eight clear of Michael Schumacher, who managed 91 from 308. pic.twitter.com/l23DpuMHY9

The Dutchman closed the door on his rival at the opening right-handed Abbey bend. But his defence through the ensuing corners put Hamilton on the front foot and the Mercedes man momentarily moved ahead of Verstappen at more than 200mph on the Wellington Straight, only to see Verstappen hold the position by retaining the racing line through Brooklands.

But Verstappen ran wide on the exit of Luffield, affording Hamilton a third opportunity for glory. Verstappen moved to the centre of the track before Hamilton drew alongside him and within centimetres of the wall on the old pit straight.

Verstappen was marginally ahead as they approached the right-handed Copse but as the Dutchman turned in for the corner, Hamilton’s left-front tagged the right-rear of his Red Bull.

The force of the impact sent Verstappen spiralling out of control, backwards through the gravel, and into the barriers to an audible groan of concern among the largest gathering at a sporting event in the UK since the pandemic started.

Verstappen’s race engineer Gianpiero Lambiase was straight on the radio, asking: “Max are you OK?” For eight seconds there was nothing. Then suddenly, the sound of a man wincing in pain following an impact which registered at 51G.

Verstappen managed to haul himself out of his written-off Red Bull machine before standing hunched over and then led away to an ambulance. There was relief among the fans and a round of applause as he managed to offer a wave.

The race was stopped and then the accusations began, chiefly from Red Bull team principal Christian Horner.

In a heated radio message to FIA race director Michael Masi, Horner said: “In that corner, he was never anywhere near alongside.

“Every driver that has driven this circuit knows that you do not stick a wheel on the inside of Copse. That is an enormous accident.

“And it was 100 per cent Max’s corner. As far as I am concerned, the full blame is on Hamilton who should never have been in that position.

“You could have had a massive accident. Thank God he walked away unscathed, so I hope you are going to deal with it appropriately.”

Later, he added: “Thank God we have not had a driver seriously injured or worse here today.”

Following a delay of 45 minutes the race restarted with Hamilton starting from second after Leclerc passed him in the moments after his collision with Verstappen.

Hamilton was then slapped with a 10-second penalty which he served at his pit stop on lap 27 of 52 which dropped him to fourth behind Lando Norris, Valtteri Bottas and a dozen seconds adrift of Leclerc.

Hamilton passed Norris on lap 31 before Bottas was ordered out his way by Mercedes. The world champion then set about hunting Leclerc with the gap reduced to just 1.5 seconds with four laps to run.

On lap 50 of 52, Hamilton put his Mercedes on the inside of Leclerc’s Ferrari through Copse before backing out of the move, but the Monegasque ran wide and Hamilton assumed the lead to the delight of the partisan crowd.

He crossed the line 3.8 seconds clear of Leclerc with Bottas completing the podium and Norris finishing fourth.