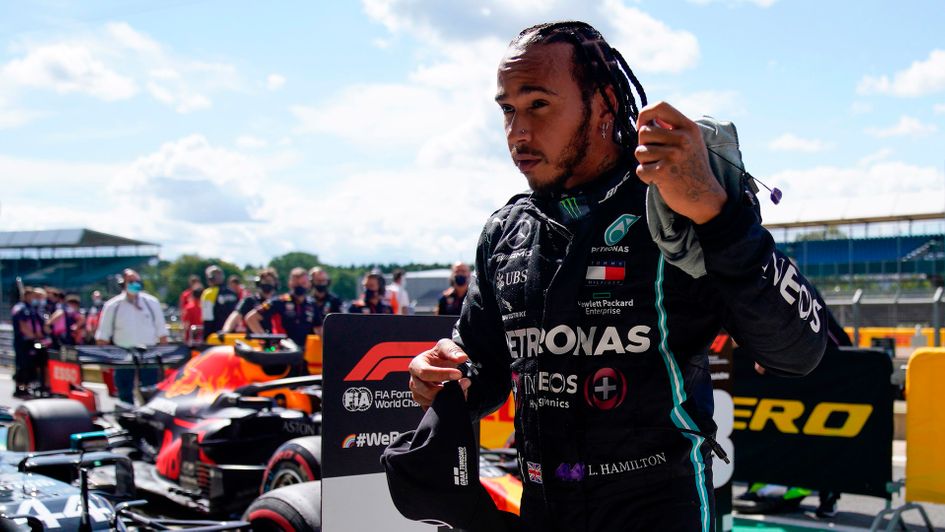 Hamilton's seemingly inevitable canter towards a record-equalling seventh world championship was provided with another boost here after he put his Mercedes on pole position.

In a crushing display, Hamilton finished three tenths clear of his Mercedes team-mate Valtteri Bottas, and a full second faster than third-placed Max Verstappen, with the fastest time ever recorded at the former World War Two Royal Air Force base.

Hamilton lapped the 3.7-mile track at an average speed of 156.6 mph to take the 91st pole of his career, and seventh at Silverstone - making him the first driver to take seven poles at his home race.

As a result the 35-year-old would appear to be firmly on course for a seventh home win.

The Mercedes driver has celebrated his past victories by crowdsurfing with the partisan spectators - but on Sunday the grandstands will be empty with 140,000 fans forced to abandon their pilgrimage to Northamptonshire amid the Covid-19 crisis.

"Normally when I approach this weekend I have a different feeling which is part-excitement and part-nerves knowing how many people come to this race," said Hamilton.

"Those nerves come with wanting to excel and deliver for everybody because we have been on an incredible journey together.

"So, I tried to keep that in mind this weekend, and whilst I didn't have that same feeling knowing that they weren't going to be here, I just tried to reminisce on the past years, and somehow get that energy and utilise it which wasn't easy.

"I cannot imagine how many people will be watching at home, but I hope they enjoyed it today and I hope it gives them some positivity."

Hamilton's pole hung in the balance for much of the afternoon. He had failed to finish fastest in any of the practice sessions, with Bottas topping the time charts in both Q1 and Q2.

There was even an uncharacteristic mistake from Hamilton after a 360-degree spin on the exit of Luffield in the second phase of qualifying.

Hamilton made it back to the pits as the running was halted for eight minutes to clear up the mess of gravel and stones he had left behind.

He then composed himself to avoid a shock Q2 exit before predictably pulling out the stops when it mattered most with a fine lap to deal a hammer blow to Bottas, who he heads by five points at the championship summit.

"This track is awesome because with a gust of wind, you have a tailwind, headwind and crosswind at the same time so it feels like you are juggling balls on a moving plate at high speed," added Hamilton.

"I got into Q2 and had that big snap and spin, my first spin in some time. Then, it is about trying to recompose yourself and getting back in line because qualifying is about building blocks.

"That was probably the hardest turnaround knowing that Valtteri had been putting in quick lap after quick lap. So going into Q3, with a fresh reset mentally and pulling out those two laps, I feel great."

Hamilton's only rival for the win will come in the form of Bottas as Mercedes continue to obliterate their bewildered opposition.

Ferrari's Charles Leclerc finished fourth, 1.1 sec down, while his team-mate Sebastian Vettel ended up in 10th, an eye-watering two seconds off Hamilton's pace.

Lando Norris will be in the mix for a second career podium after he finished fifth, two places ahead of team-mate Carlos Sainz - the McLaren cars split by Racing Point's Lance Stroll.

Alexander Albon's rocky campaign continued as he was unable to get his Red Bull through to Q3. Red Bull are historically ruthless in axing drivers and the London-born Albon, who qualified only 12th here, faces a precarious future if his one-lap performances fail to improve.