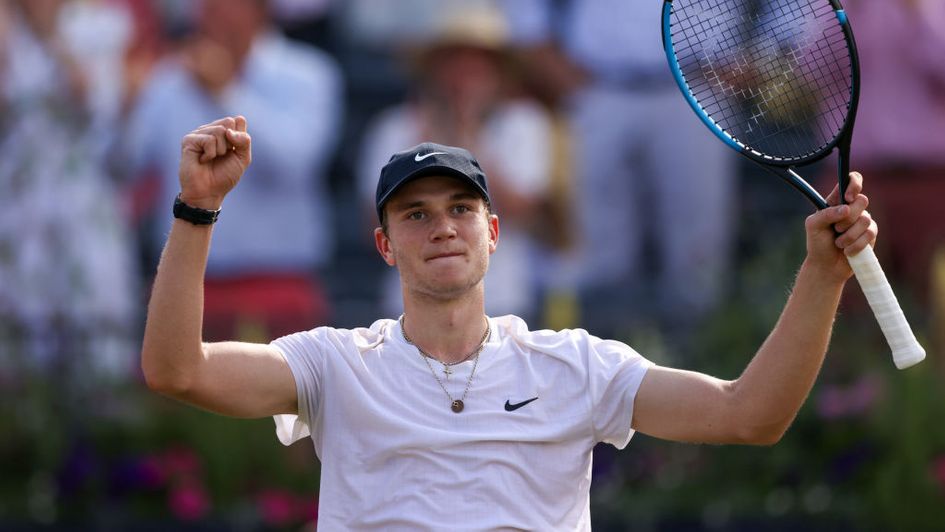 Jack Draper is into the semi-finals at Eastbourne

Jack Draper became the last British player standing in the singles draws at Eastbourne after battling past compatriot Ryan Peniston to reach the semi-finals.

The 20-year-old tournament debutant won the final five games in a row, including breaking his opponent three times in succession, to wrap up a 6-3 6-3 win at the Rothesay International.

Draper will now face French-born American Maxime Cressy in what will be his first ATP Tour semi-final.

Peniston, who was also a quarter-finalist at Queen’s, Nottingham and Surbiton this summer, joined fellow Britons Cameron Norrie and Harriet Dart in exiting the competition at the quarter-final stage on Thursday.

British men’s number one Norrie was denied a first Devonshire Park semi-final after slipping to a 7-5 7-5 defeat to world number 60 Cressy, while Dart was outclassed by two-time Wimbledon champion Petra Kvitova, losing 6-3 6-4.

Draper then provided some much-needed cheer for the home crowd as he backed up Wednesday’s stunning second-round victory over world number 15 Diego Schwartzman by dispatching countryman Peniston.

In a first tour-level meeting between the left-handed wildcards, Peniston initially gained the upper hand as he took the opening two games of an entertaining contest.

But, having earlier in the day wasted little time in completing a 7-6 (8) 3-6 6-3 success in his delayed round-two clash with Spaniard Pedro Martinez, the 26-year-old was ultimately well beaten.

World number 108 Draper took six of the next seven games on court number one to clinch the opening set before the second followed a similar pattern as he survived a brief momentum swing to overturn a 3-1 deficit and progress.

Norrie, who will be seeded ninth at Wimbledon next week, could have been waiting for Draper in the next round.

But he was unable to capitalise on an early break of serve in the opening match on centre court as Cressy impressively roared back.

The 26-year-old quickly turned his attention to the forthcoming home major at SW19.

“He played a very good match and he kind of stole that first set from me,” Norrie said of his loss.

“I looked like I was going to win that and I was holding it easily and he played a really good game to break me and then kept with the momentum.

“I got a couple of matches here and really enjoyed it, my time on the court.

“It was perfect, exactly what I needed, and going back to London right now, and I just get ready for Wimby obviously.”

In the women’s draw, Dart showed glimpses of her talent during a spirited display against 14th seed Kvitova but never seriously threatened an upset.

Kvitova dominated for much of the contest thanks to a series of powerful groundstrokes and deservedly claimed a second British scalp, having eliminated Katie Boulter the previous day.