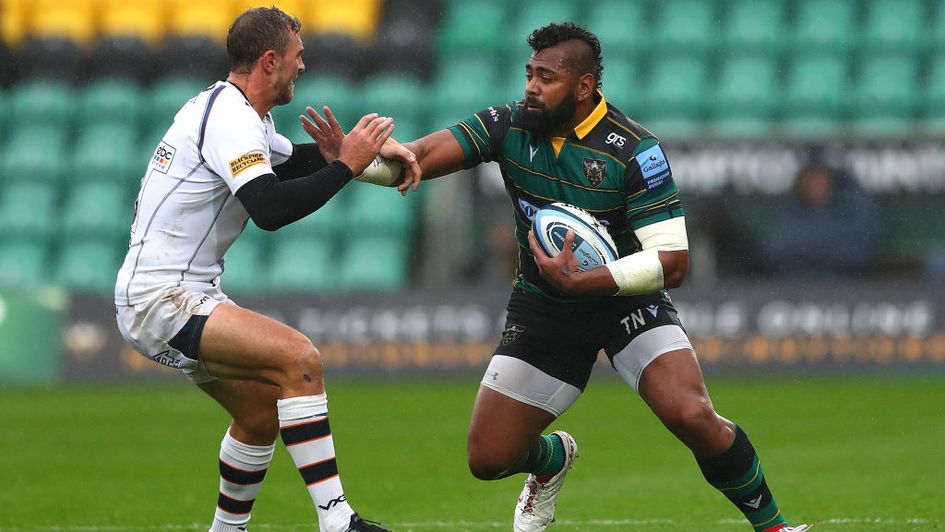 A review of Sunday's action in the Gallagher Premiership, where Taqele Naiyaravoro grabbed a late winner for Northampton at Wasps.

Taqele Naiyaravoro snatched victory for 13-man Northampton with two minutes remaining as they battled to a 35-31 win at Wasps to remain one point behind Gallagher Premiership leaders Exeter.

Marcus Watson, Jimmy Gopperth and Matteo Minozzi all crossed for Wasps in addition to Jacob Umaga's nine points with the boot to haul the home side back into contention to trail 28-24.

Saints were reduced to 14 players when Tom Collins was sent off in the 65th minute for an aerial challenge with Umaga, with Reinach sin-binned five minutes later for a deliberate knock-on and a penalty try for Wasps to take the lead.

However, Naiyaravoro powered over in the 78th minute to claim 13-man Northampton's sixth win of the league season, with Biggar adding his fifth kick of the day.

What a dramatic finish at the Ricoh!@SaintsRugby win it late on with 13 men!

You can stop Taqele Naiyaravoro once, but twice is just too big an ask 💪 pic.twitter.com/TktnclBZA1

Rory Hutchinson sparked the game into life in the 17th minute when he sent Biggar through a gap and the fly-half ran 25 metres before providing Reinach with an easy run-in try.

Biggar converted before Wasps immediately missed a good opportunity to draw level when the visitors threw long at a line-out in their own 22.

Thomas Young gathered and rushed forward but the home flanker lost possession as he drove for the try-line.

However, the hosts maintained the pressure and were rewarded when Umaga kicked a simple penalty to put them on the scoreboard.

Wasps followed this up by taking the lead against the run of the play. Centre Malakai Fekitoa ripped the ball from Piers Francis before sending Watson away on a 45-metre sprint to the line.

Saints were soon back in front when Alex Waller powered away to put the Wasps' defence on the back foot.

The prop was hauled down but the ball was recycled for Harrison to stroll over after Ahsee Tuala had picked the number eight out with a long pass.

Saints led 14-10 at the interval and within a minute of the restart, they extended their advantage when Wood charged down Dan Robson's clearance to pick up and score.

Northampton looked to have sealed the win 10 minutes later when Reinach finished off a period of sustained pressure to score his second and pick up his side's bonus point.

However, spirited Wasps soon replied with converted tries from Gopperth and Minozzi in quick succession to bring them right back into the match.

Popping the ball around for fun 🙌 pic.twitter.com/tr3B4agv9W

Saints were now firmly under the cosh after Collins' dismissal was shortly followed by Reinach's sin-bin for a deliberate knock-on, which resulted in a penalty try award to put Wasps ahead.

But Saints conjured up one last effort and Naiyaravoro powered over to have the last say in a dramatic game.

Gallagher Premiership leaders Exeter posted a sixth league win of the season by beating London Irish 45-28 at the Madejski Stadium.

Irish battled away to claim four tries of their own and collect a losing bonus point, with Exeter briefly being reduced to 13 men in the second half when wing Olly Woodburn and centre Ollie Devoto were sin-binned for deliberate knock-ons.

Lock Davie Dennis, hooker Luke Cowan-Dickie and Devoto all followed Sam Hill over the Irish line before the break, and there was no way for an Exlies side condemned to a third successive league defeat.

Gareth Steenson finished with 15 points from six conversions and a penalty for Exeter, and they remain top of the Premiership pile heading into a fortnight of Heineken Champions Cup rugby. 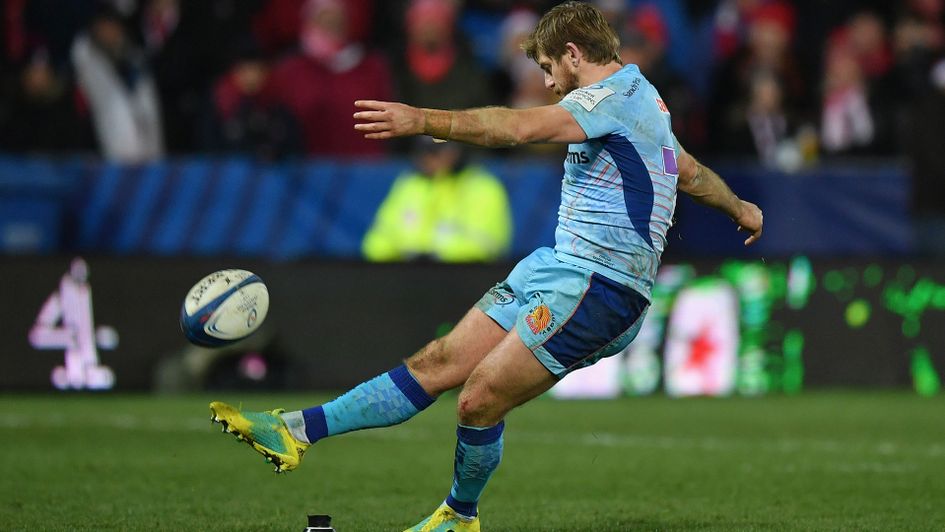 England head coach Eddie Jones was among the crowd, and Exeter should have taken a fifth-minute lead when they worked blindside space well, but Woodburn dropped a scoring pass.

The Chiefs, though, only had to wait another two minutes before opening their account, with strong work by the pack setting up an attacking platform before Hill crossed for a try which Steenson converted.

Irish were starved of possession during the early stages, yet they made the most of their first opportunity, switching play from a scrum and Tuatagaloa crossed on the overlap and Myler kicked a touchline conversion attempt.

It was an impressive response by the home side, but they were then forced into an early change when their Australia international lock Adam Coleman went off injured, being replaced by Barney Maddison.

And Exeter regained the lead seven minutes before half-time, using their strong ball-carriers to maximum effect, and skipper Dennis touched down, allowing Steenson another easy conversion for a 14-7 advantage.

Exeter pushed for another score as the interval approached, and it arrived after their forwards drove from a line-out and Cowan-Dickie finished off, with Steenson's third successful conversion leaving Irish reeling.

And there was still time for another try, with Exeter completing a blistering spell when Devoto finished brilliantly for a bonus-point score which Steenson again converted.

Irish were down and out, and Hill scored a fine solo try just two minutes after the restart that took Exeter past 30 points.

The Exiles gave their supporters something to cheer about when Tuisue crossed from close range and Myler converted, yet it remained a tough exercise against a team in impressive form.

Hassell-Collins provided brief hope of an unlikely comeback with a high-class finish for Irish's third try, but Exeter resumed normal service when Hill made a decisive break and delivered an exquisite pass to Townsend.

Steenson's conversion made it 42-21, before Exeter were temporarily reduced to 14 men when Woodburn was yellow carded, then Devoto followed him three minutes later for an identical offence.

Mafi's score gave Irish a fourth try as Exeter played two men short for eight minutes, but a Steenson penalty confirmed a healthy Exeter advantage and preservation of top spot in the league.