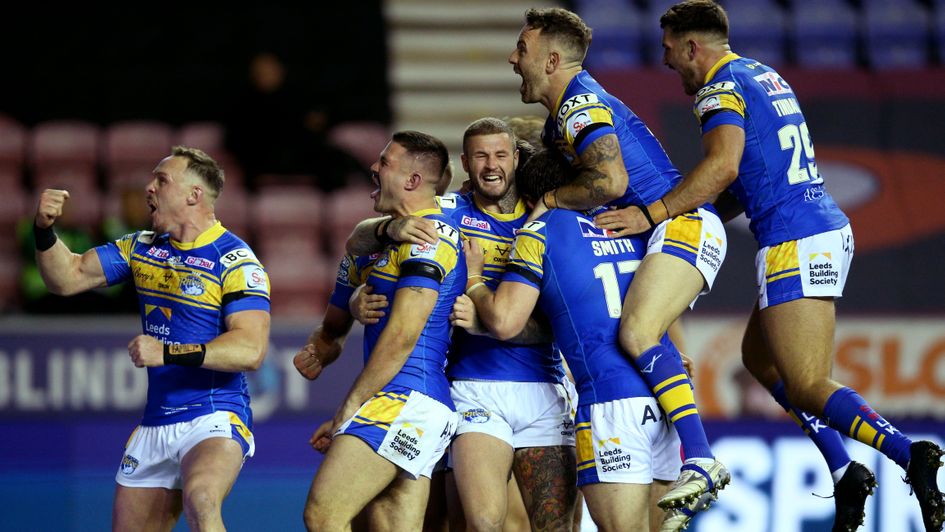 Leeds Rhinos have made another Grand Final from 5th place

Leeds produced a remarkable display of grit and determination to condemn 12-man Wigan to a first home defeat of the season and reach an 11th Super League Grand Final.

The Rhinos were under the cosh for virtually the whole of the first half of the semi-final at the DW Stadium but managed to restrict their opponents to a 4-2 interval lead before finding their attacking rhythm in the second half.

Makeshift hooker Jarrod O’Connor scored his first try for the club and former St Helens second rower James Bentley added two more to help Leeds to a stunning 20-8 victory that took them through to Old Trafford next Saturday.

The only disappointment for Leeds was an injury to scrum-half Aidan Sezer, who was felled by a high and late tackle by Wigan’s England forward John Bateman and will miss the Grand Final after failing his head injury assessment.

Bateman was shown a red card for the tackle and will now face an anxious wait to discover if his ill-timed challenge puts his World Cup place in jeopardy, with the Rugby Football League’s match review panel sure to take a close look at the incident on Monday.

Wigan’s misery was compounded by the loss of tryscoring phenomenon Bevan French with a foot injury early in the second half and they trailed 20-4 before hooker Sam Powell marked his 250th appearance for them with a late consolation try.

Defeat brought a disappointing end to the distinguished career of Wigan captain Thomas Leuluai, who made his 327th appearance in place of the injured Cade Cust.

For Leeds, reaching their first Grand Final for five years must rank among the biggest achievements in the history of the competition.

They were second from bottom of Super League in April after winning just one of their first 10 games but go to Old Trafford in buoyant mood after enjoying a remarkable revival under Rohan Smith.

Former Leeds prop Brad Singleton knocked on inside the first set but Wigan’s handling was otherwise faultless in the first half and their aggressive defence, allied to a superb kicking game, kept Leeds pinned inside their own half for long periods.

The only try of the first half, which came after 10 minutes, was set up by loose forward Morgan Smithies in charging down Blake Austin’s kick to gain possession on halfway and, in the final play of the set, Harry Smith’s crisp pass found winger Liam Marshall with just enough space to produce a flying finish in the corner.

Smith was wide with the conversion and he was also off target with a penalty as the Warriors failed to make the weight of possession count on the scoreboard.

Former Wigan centre Zak Hardaker relieved the incessant pressure with a counter-attack and, although Smith got back to make the tackle, Hardaker pulled a couple of points back with a penalty goal after Austin was tackled high by Jai Field.

Field was a constant threat with his pace and elusive running but French was a virtual passenger on the wing as he struggled to overcome a foot problem sustained in the opening stages.

Leeds, urged on by almost 4,000 travelling fans among the 12,777 crowd, rarely got out of their own half but defended heroically to restrict their opponents to a solitary try before half-time.

And their patience and perseverance paid off four minutes into the second half when O’Connor, preferred to skipper Kruise Leeming as the Rhinos’ starting hooker, squeezed over from dummy half for the try that put them in front.

Hardaker added the conversion and it got even better for the visitors three minutes later when Bentley won the race to Sezer’s grubber kick to score their second try, with Hardaker’s third goal making it 14-4.

Wigan’s task became virtually impossible when Bateman was shown a red card after 50 minutes for his tackle on Sezer, who played no further part in the game.

Bateman was the first to call for medical assistance for his opponent and went over to apologise before leaving the field but his departure left a huge hole in Wigan’s defence, which Leeds exploited in the 65th minute for Bentley to score his second try.

Marshall was denied a second try by the video referee and Powell was held up over the line before eventually forcing his way over from dummy half for the final score of the game.