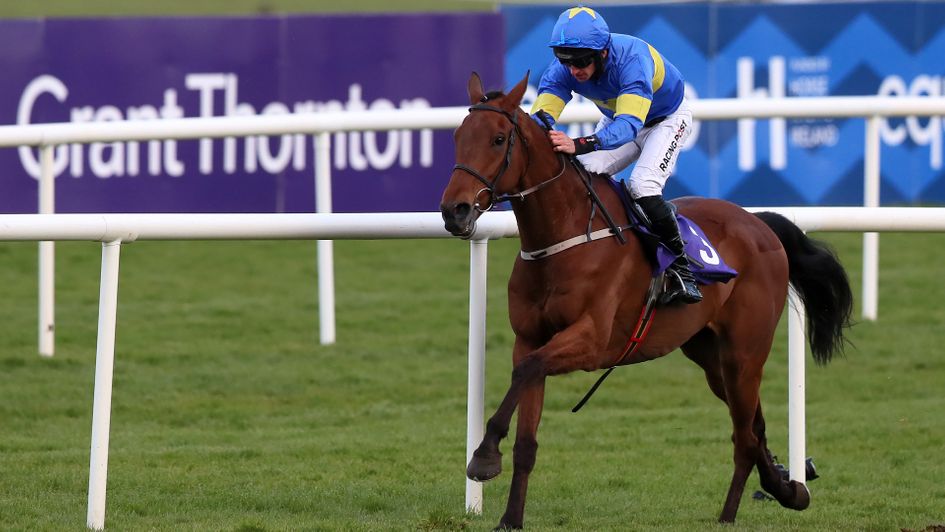 Dysart Dynamo has made an unbeaten start to his career

Check out Timeform's runner-by-runner guide to the Sky Bet Moscow Flyer Novice Hurdle, a race won by Vautour and Douvan on their way to winning the Sky Bet Supreme at the Cheltenham Festival.

Showed smart form in bumpers, winning at Clonmel and at the Punchestown Festival, and he maintained his unbeaten record when easily scoring at Cork on his hurdling debut last month. He won that in the style of an exciting prospect and he has more to offer.

Has been kept busy since winning a maiden hurdle at Ballinrobe in May and a novice hurdle at Tramore in July, but he has come up short on his last 11 outings and faces an uphill task in this company.

Cost €270,000 as a four-year-old after winning his sole start in points. Shaped with encouragement when runner-up behind Blazing Khal on his hurdling debut at Galway in October and he confirmed that promise when beating Adamantly Chosen by three-quarters of a length at Fairyhouse the following month. Upped in trip and showed improved form when third to Stage Star in the Challow Novices' Hurdle at Newbury last time and is entitled to respect on the back of that performance. Drops back down in trip here.

Cost £310,000 as a four-year-old after getting off the mark in points at the second attempt. Showed useful form when landing a maiden hurdle at Tramore by 25 lengths, soon assuming command after leading five from home. Physically imposing sort who looks sure to progress.

Fair handicapper on Flat who has developed into a fairly useful hurdler, getting off the mark in this sphere when scoring at Galway in September. Produced his best effort when second to Top Bandit in a novice here last month, though he had the run of the race from the front on that occasion and much more will be required here.

Half-brother to high-class chaser Easy Game. Won a maiden bumper at Senonnes-Pouance in October 2020 on his only start for Gaetan Taupin and was then sold for €90,000. Was strong in the betting on his hurdling debut and first start for Willie Mullins at Naas last month and he scored impressively, despite jumping right at times. An exciting prospect who is open to significant progress.

Fairly useful hurdler who won novices at Ballinrobe in July and Sligo in August. Produced one of his best efforts since when third at Cork last week but looks out of his depth here.

Sure to be an informative contest with the unbeaten Dysart Dynamo fancied to take the step up in class in his stride. Stablemate Hawai Game is sure to leave the bare form of his Naas win behind and is a threat, along with Guily Billy, who is a good sort physically and promising in his own right.