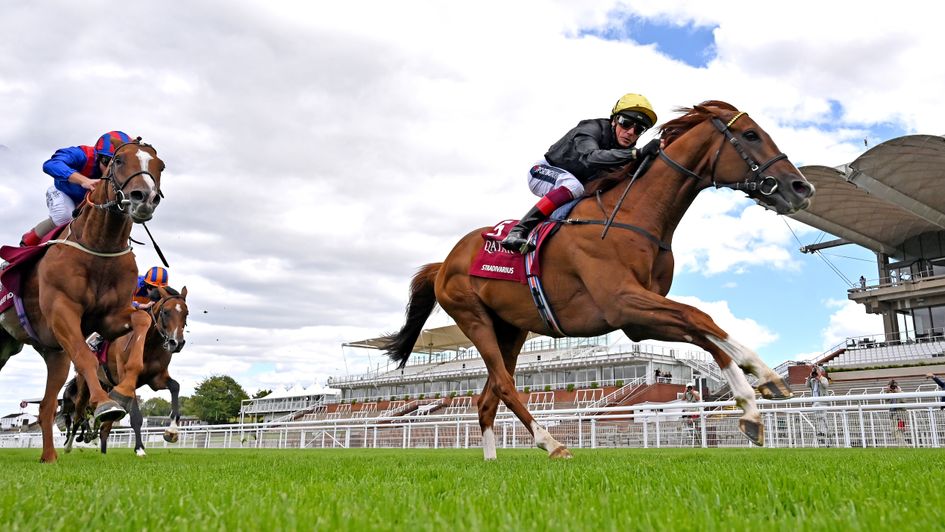 Stradivarius: Showed a swift turn of foot to win his fourth Goodwood Cup

Five-time Champion Trainer John Gosden described Stradivarius to be “very much part of the family” as he prepares to try and win a historic fifth Al Shaqab Goodwood Cup on Tuesday.

Reflecting on his fourth-place finish in last month’s Gold Cup at Royal Ascot, Gosden paid tribute to the winner whilst also being left frustrated with how the race panned out.

“He’s been in good order since Royal Ascot. The Gold Cup was a fascinating race and Subjectivist put in a superb performance. I’d love to have got in a race with the winner, but we never had the opportunity to get there and that’s life.

"I think Frankie, having ridden him so brilliantly in previous Gold Cups, seemed to have a brainstorm and sit 12 lengths of the pace! I’m sorry that Subjectivist is not able to run next week, it’s heart-breaking for everyone involved and it would have been great to have enjoyed a ‘Duel on the Downs’.”

Looking ahead to next week’s £500,000 British Champion Series race at Goodwood, Gosden is happy with Stradivarius’s preparation ahead of what is a unique test over two miles.

He said: “He didn’t have much of a race at Ascot so that race didn’t seem to knock him back too far physically. He’s won four Goodwood Cups in a row which takes some doing. It’s going to be a fascinating race with some very nice horses turning up and you’re always going to need some luck in running around Goodwood given it’s not exactly a big, open galloping track.

"It’s quintessentially different, rolling in and out, left, right and has cambers. It should make for an exciting day on Tuesday.”

Having arrived at Clarehaven Stables in 2016, Stradivarius has been a key part of the Gosden team for six years and his trainer paid tribute to his longevity and toughness.

Gosden said: “He’s been a pleasure and a lot of fun to train through the years but as a seven-year-old full horse, he probably knows a great deal more about the game than I do! He’s very much part of family here – we had Enable with us until she was a six-year-old and him until he is seven. It doesn’t normally happen with full horses like him.

"Everyone enjoys his company, and he checks everything in and out from his box and he knows Clarehaven inside and out. He enjoys going out on the Heath and shouting at the other strings!”

“It’d be wonderful if he puts in a big performance and runs well or wins but even to have him there for a fifth time is an achievement for everyone here in itself.”

Mark Johnston’s Sir Ron Priestley was a supplementary entry for the contest after his victory over Al Aasy in the Princess Of Wales’s Tattersalls Stakes at Newmarket taking the number of possibles to 13.

The five-year-old bounced back from two successive losses to win at Newmarket and will now be one of two Johnston runners alongside Nayef Road.

Sir Ron Priestley was defeated in the Yorkshire Cup Stakes by Andrew Balding’s Spanish Mission and the two are likely to meet again.

Spanish Mission followed up his Knavesmire victory with a third-placed run in the Gold Cup at Ascot, a performance that saw him finish ahead of several Goodwood Cup rivals.

Amongst them were the Aidan O’Brien-trained trio of Santiago, Serpentine and Amhran Na Bhfiann, who finished seventh, eighth and 11th respectively.

Only the latter has run since, triumphing in a Group Two at the Curragh by seven lengths.

O’Brien has two further entrants in the race, with King Of The Castle also engaged alongside Passion, who was third behind Amhran Na Bhfiann in the Curragh Cup.

Jamie Osborne’s Mekong and Ismail Mohammed’s Away He Goes complete the list.