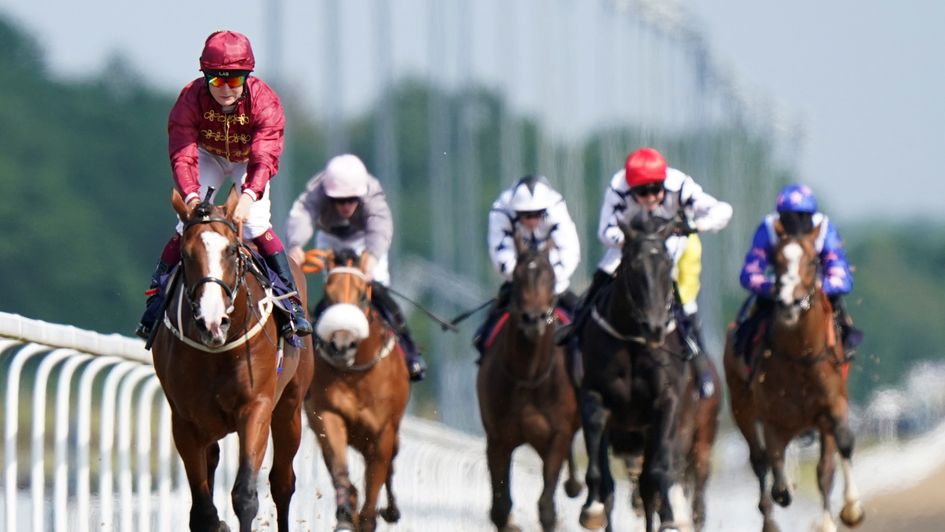 Shining Blue gave another idea of what the future may hold when extending his unbeaten record to three in the Jenningsbet Seaton Delaval Handicap at Newcastle.

The Saeed bin Suroor-trained four-year-old was unraced at two and three, but is quickly making up for lost time.

He made a taking winning debut at Leicester before following up under a penalty at Ripon.

Starting life in handicaps off a mark of 94, which could hardly be said to be lenient, he had no trouble in disposing of some useful rivals under Danny Tudhope, winning at 8/13 by a length and a half.

“He’s a nice horse and he’s improving with every race,” said Bin Suroor.

“Today he won well, I thought he had improved from what I had seen at home and he was clear at the end. I’ve always liked him.

“That was his third run, he might just have an easy time now before we look for another race for him. He’s a horse for the future and I don’t want to put too much pressure on him, just let him find himself.

“There are no plans. He’s won a handicap there so maybe we’ll look at a Listed race next. He’ll probably be rated around 100 after that.

“Danny rode him well, he had ridden him once before so he knew him. The pace suited him today so he looks a nice horse.”

Shining Blue holds entries in the Group Two Lennox Stakes and the Golden Mile at Goodwood, but Bin Suroor was in no rush to commit either way.

“A mile looks his trip for now but in the future maybe he can go further, he might get a mile and a quarter. He showed speed there but the way he works he could go 10 furlongs,” he said.

“He’s got entries at Goodwood, but I want to see how he is in a week. If he’s fresh and happy we might look at them, but if not we’ll ease off before looking for another race.”

Elsewhere on the card, the Mark and Charlie Johnston-trained Lion Of War almost certainly earned himself a step up in class a facile success in the Pertemps Riverside Restricted Novice Stakes.

Running in the Qatar Racing colours and a son of the late Roaring Lion, Cieren Fallon’s mount powered clear and was eased markedly in winning by 10 lengths as the 8/11 favourite.