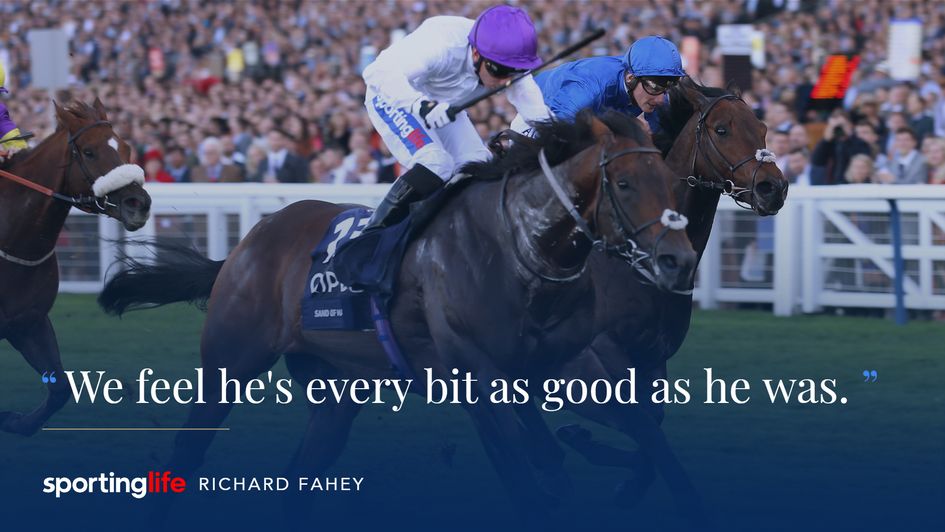 Sands Of Mali runs for the Fahey team on Saturday

Richard Fahey has high hopes for Sands Of Mali and Mr Lupton on the final day of Royal Ascot - check out his thoughts.

He’s been blighted by little setbacks throughout his career and definitely needed the run at Newcastle the other day. Whether he’s still quite 100% I’m not sure and the handicapper has never really given him a chance since his two-year-old days when he had some very strong form.

It’s been difficult for him but they dropped him a couple of pounds for the last run and the rain in the week has helped him. He's definitely best on slower ground when things aren’t happening quite so quickly. He’s had the run under his belt so you never know and pray for more rain if you fancy him. He’d love it.

I thought he ran really well when third at Newcastle last time, I was very pleased with him. That will have put him spot on and he’s not a bad horse. He doesn't have tonnes in hand, I don't think he's a 100-horse but he can be competitive off his current mark of 93.

You need all the luck going in these races but a strong pace will suit him and he should be finishing well. If he catches the ones up front we'll see.

His work this spring has been exceptional but it always has been. Of all the good sprinters we’ve had here his work has consistently been the best. If we let him bowl on the gallop nothing gets near him. That’s not because we haven't got other good ones here either, but he’s been like that all his life, even as a two-year-old.

We're very happy with him, he’s had three away days, we’ve left no stone unturned and Ben Curtis came in and had a sit on him on Tuesday. He was delighted and I’d imagine Ben went home and thought ‘this is a machine’ because that’s the way he works. He went along with Mr Lupton and poor Lupton can't get near him - that's the ability he has.

The rain in the week was good for him and I’m very happy with him. He's very good on slowish ground.

He didn’t have his trip to Dubai this year and has had a good preparation. He had a little issue behind last year but he’s over that and we’ve got him moving great, everything is where I’d want it to be. We feel he's every bit as good as he was – but you have to get them on the track to find out.

I was delighted with his run at Newmarket and even more so when the handicapper gave us two pounds for it!

They hack cantered through that race and it can happen in the pattern races and that doesn’t suit him. He loves the big handicaps when they go flat out – they’ll go a million miles an hour which will be right up his street.

He’s not getting any younger but is rated 104 which is the lowest for some time and on his day he’s very effective. The race will suit him and he’s a huge price, maybe I’m getting it wrong but I think he’ll run better than the price suggests.