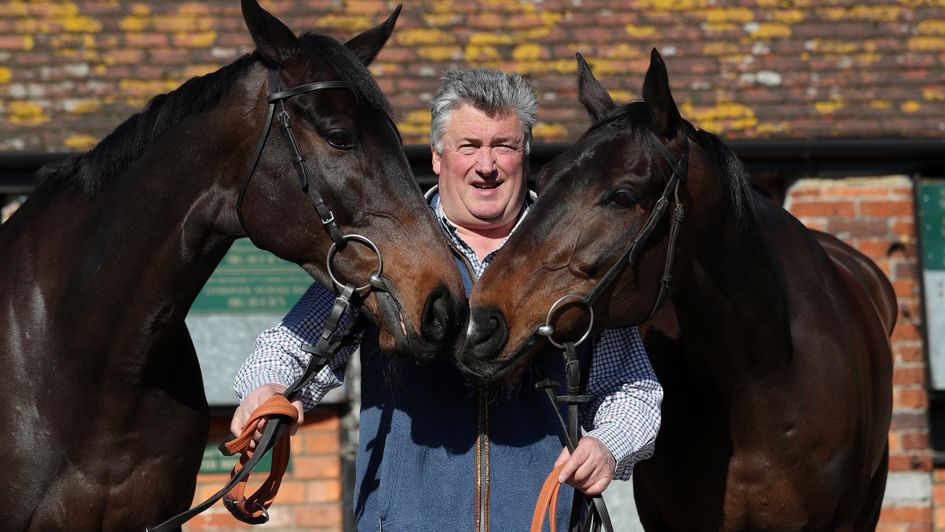 Paul Nicholls hopes Clan Des Obeaux can end his 10-year drought in the Magners Cheltenham Gold Cup by giving him a record-equalling fifth victory in the race.

Nicholls is keeping his fingers crossed that this season's King George VI Chase hero will provide him with his first victory in the coveted Grade One since Kauto Star claimed the second of his two triumphs in 2009.

Although Clan Des Obeaux - no bigger than 9-2 for the Gold Cup - is yet to win in four previous starts at Cheltenham, the 10-time champion trainer believes there are valid excuses for each of those defeats.

The Ditcheat trainer said: "Everyone keeps saying he hasn't won at Cheltenham in four starts. The first time he ran there as a juvenile, he was only just beaten in a Listed race.

"He was then second as a just-turned five-year-old to Whisper in the Dipper (Novice Chase) - which was good form - and he then carried 11st 12lb and finished second to a horse carrying 10st 2lb (Guitar Pete).

"Harry (Cobden) got off that day and said he is still learning about the job. Now we are where we want to be."

After Clan Des Obeaux followed up his Boxing Day success at Kempton with victory in the rearranged Betfair Denman Chase at Ascot earlier this month, Nicholls feels his new stable star is primed for another big performance.

He added: "He is an experienced horse that has matured, and he has done the talking himself in the last few runs.

"We are really excited about running him in the Gold Cup. We don't know what he will be end up being rated, or where he will end up.

"Kauto won his first Gold Cup at seven, so he is the right age. Fingers crossed, with a bit of luck in running, he will run a big race."

A late decision will be made whether Frodon will run in the Gold Cup or Ryanair Chase as he bids to back up his success in a Grade Two contest at the track.

Nicholls added: "I'm not worried about the trip in the Gold Cup, because he will gallop and stay all day - but that will be a tougher race than the Ryanair over that trip, and the Ryanair may cut up.

"We don't want to run him in the Gold Cup for the sake of it, if we could win the Ryanair. He is rated 169 now - which is right up with the best. He will give a good account of himself, whatever he runs in."

🏆 All the latest from 10-time Champion Trainer Paul Nicholls including the pick of his Cheltenham Festival team...

Nicholls believes Topofthegame can provide him with a third victory in the RSA Insurance Novices' Chase at the Cheltenham Festival.

Narrowly beaten in the Coral Cup at Prestbury Park last March, the seven-year-old has run just twice over fences this season - and has suffered defeat on both occasions.

However, he ran a remarkable race to fill the runner-up spot on his first run of the campaign at Exeter after completely blowing the start - and was last seen splitting La Bague Au Roi and Santini in the Kauto Star Novices' Chase at Kempton on Boxing Day.

Nicholls won successive renewals of the RSA with Star De Mohaison (2006) and the mighty Denman (2007), and feels the giant Topofthegame has plenty going for him in his tilt at the extended three-mile contest in little over a fortnight's time.

Speaking during a press event at his Ditcheat yard on Tuesday, Nicholls said: "He is in the RSA and the JLT (Novices' Chase), but he is almost certain to run in the RSA. The only way he would run in the JLT is if the weather changed, and it was a foot deep of mud, but that isn't going to happen.

"He is probably as tall a horse you would see in training - he is huge - but he has lots of ability.

"His Exeter run was a bit of a disaster, because he whipped round at the start - although it may not have been such a bad thing. He gave them the best part of 25 or 30 lengths, but jumped nicely in behind and finished second to Defi Du Seuil, which is top-class form.

"He went to Kempton over Christmas and was second in the Kauto Star to La Bague Au Roi, who won the Grade One at Leopardstown the other day. That is really good form as well.

"Hopefully he is one our big chances of the Festival."

While Topofthegame is prominent in the betting for the RSA Chase, his stablemate Capeland is a big outsider for the the Arkle Trophy the previous afternoon.

However, Nicholls feels he could outrun his odds of around 50-1, saying: "I might run him in the Arkle. He ran well at Chepstow last weekend and is progressing all the time.

"I think the Arkle could cut up, so he may go there and could make the frame."

The Somerset handler also has a strong hand in some of the handicap chases at the showpiece fixture.

Perhaps his most notable handicap runner is Give Me A Copper, who is part-owned by Sir Alex Ferguson and has been backed into favouritism for the Ultima Handicap Chase following an eye-catching return from a lengthy absence at Sandown.

"He would be one of our interesting ones on the first day of the Festival. He is favourite - he's fragile but talented," said Nicholls.

"As a young horse in Ireland, he won his only point-to-point and a bumper. He won a couple of novice hurdles for us and then came back in last season and won his novice chase at Kempton, and sustained an injury.

"He came back at Sandown the other day with a big weight and ran a really good fourth. He travelled well, jumped well and got a bit tired from the back of the second-last.

"He hadn't been anywhere at all for a gallop, so that race will bring him on, and the idea is to go for the Ultima - and if he goes well in that he would go for the Grand National.

"He has not had a great deal of experience, but he is a solid jumper and is a class horse - I'd be very hopeful of a big run at Cheltenham."

Nicholls is hoping to be double-handed in the Grand Annual, with last year's winner Le Prezien set to be joined by stablemate and leading ante-post fancy Magic Saint.

He said: "Magic Saint was a four-time winner at Auteuil last year over hurdles and fences. He has just taken a little while to acclimatise.

"He won at Wincanton 10 days ago in a two-mile handicap chase. He absolutely sluiced in that day and jumped well and travelled well. Daryl Jacob rode him and was absolutely thrilled.

"We were always training him with the Grand Annual in mind. He is a progressive horse that is going forward."

Of Le Prezien, Nicholls added: "He is a bit behind in his coat compared to some of the others. For him, though, he is quite well forward.

"He is a pound higher than when he won last year. He is a funny horse, who always comes good in the spring.

"If he can put in one of his better rounds of jumping he is not without a chance."

Despite finishing down the field on his latest outing at Haydock, Pacha Du Polder will bid for a third win in the Foxhunter Chase - and will be joined by stablemate and impressive Doncaster scorer Wonderful Charm.

Nicholls said: "Wonderful Charm won by 55 lengths at Doncaster the other day, and was right back to his best. That run would give him a right chance in what I think is an open race.

"Pacha Du Polder had his normal ordinary first run, but he is a lot sharper for it.

"Cheltenham seems to suit him, because they go flat out and you can just ride him in behind and pass a few horses." 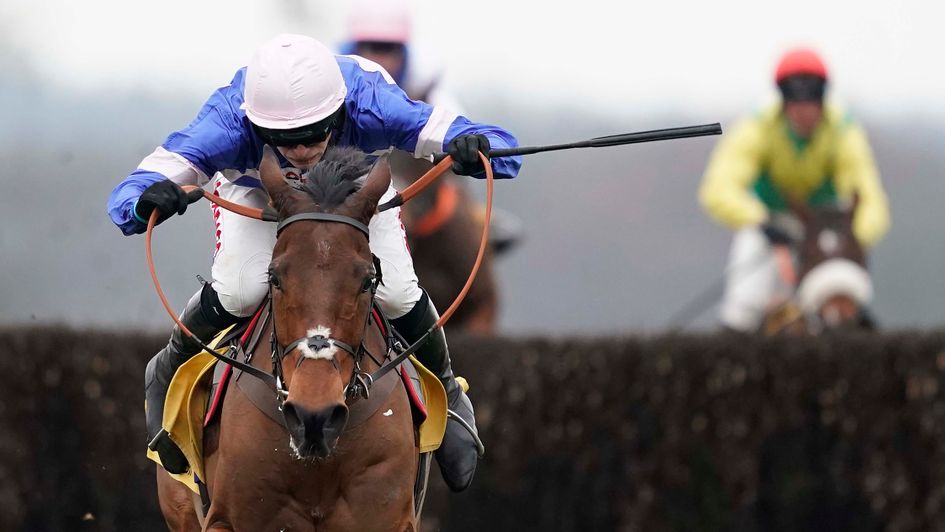 Cyrname: Won't be going to the Festival - this year at least

Cyrname to sit out Cheltenham

Nicholls has confirmed Britain's highest-rated chaser Cyrname will not be supplemented for the Ryanair Chase at the Cheltenham Festival.

After demolishing his rivals by 17 lengths in a Grade One contest at Ascot earlier this month, the seven-year-old was raised to a mark of 178 - three pounds higher than the mighty Altior.

Although some firms had Cyrname priced up for the extended two-and-a-half-mile contest at the Festival, the Ditcheat trainer will bypass it in favour of either a trip to Sandown or Punchestown later in the season.

He said: "He is just an enormous improver - and a bit like Clan (Des Obeaux), he has needed time to grow into his frame. He is all class.

"My dilimma is where I go with him. He definitely won't be running at Cheltenham or Aintree this season, but we will go left-handed in the future.

"For now, we will stick to going right-handed, and he will either go to Sandown or Punchestown - ground permitting. Next season, he will be trained for the King George and Gold Cup."

Politologue, who finished fourth behind Cyrname last time out, will also miss the Festival - with the John Hales-owned eight-year-old instead heading straight to Aintree for the defence of his Melling Chase crown.

Nicholls said: "Politologue is going to Aintree. To be fair, John was disappointed - but if you take the winner out and use Politologue as the marker for that race, they have all run normal races.

"He is better off going to Aintree, because he is better there. I said to John 'let everyone get involved at Cheltenham and keep him fresh for Aintree'."