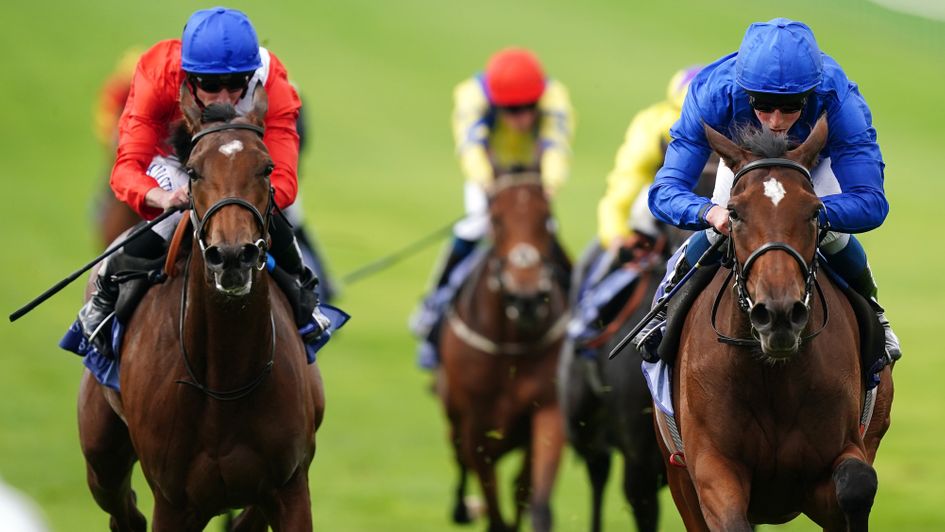 Our man at the track Adam Houghton discusses the trainers' championship and what's next for Eternal Pearl and Commissioning after their wins at Newmarket on Friday.

Charlie Appleby and William Haggas went head-to-head with the two market principals in the Princess Royal Al Basti Equiworld, Dubai Stakes, a Group Three worth over £45,000 to the winner and providing a microcosm of the 2022 Flat trainers’ championship.

Appleby – who had edged to the front in that particular battle even before a double on Thursday’s card – saddled the improving Eternal Pearl, sent off the 6/4 favourite, while Haggas was represented by the 5/2 chance Sea Silk Road.

It was 17/2 bar, though one of the others traded much shorter in the run, namely Peripatetic, who hit a low of 1.08 on the Betfair Exchange when kicking into a clear lead over three furlongs out.

It looked at that stage like Roger Varian was about to spoil the party and continue his own bonanza having celebrated his 11th winner from his last 22 runners when Zanbaq won the Listed Rosemary Stakes which kicked off the card.

For good measure, Varian also sent out Kolsai to win what promises to be an informative maiden later in the afternoon, continuing a red-hot streak which shows no signs of slowing down.

Appleby wasn’t to be denied in the Princess Royal Stakes, though, or at least William Buick wasn’t as he galvanised Eternal Pearl down the outside.

If the trainers’ championship is still up for grabs, then this ride highlighted why it’s just a formality that Buick will be crowned champion jockey for the first time this year, impressing with his finesse as he gradually went through the gears whilst encouraging his mount to engage the most lethal of hers.

Seemingly labouring and certainly unable to match Peripatetic’s turn of foot heading into the Dip, it’s fair to say that Eternal Pearl was much the stronger of the pair coming out of it.

She was simply irresistible once hitting the rising ground, staying on strongly to land the spoils by three quarters of a length from Peripatetic, with another three and a half lengths back to Sea Silk Road in third.

This was just the seventh start of Eternal Pearl’s career and her fourth win in a row, needing to defy a Group Three penalty here having also won the Prix Minerve at Deauville on her previous start. She is clearly improving at a rate of knots and it’s not out of the question that she may yet have more to offer with a view to the stiffer tasks which lie ahead.

Indeed, while the trainers’ championship wasn’t won or lost today, Eternal Pearl has now put her hand up to be part of Appleby’s team when the battle comes to a head on QIPCO British Champions Day at Ascot next month.

The Fillies & Mares Stakes is reportedly next on the agenda, a Group One for which she was trimmed into 8/1 (from 10/1) with Betfair.

Given that at least two of those ahead of Eternal Pearl in the ante-post betting – Above The Curve and Alpinista – are set to be in action at Longchamp on Arc weekend, then it’s a race which could easily cut up and provide Appleby with an excellent opportunity to add another valuable Group One success to his tally before the end of the season.

Appleby might need every one of them that he can get as he tries to defend the champion trainer crown which he won for the first time in 2021. Incidentally, he still trailed Andrew Balding at this stage last year, fulfilling the role of Eternal Pearl rather than Peripatetic, the hunter rather than the hunted.

This time, however, the shoe is on the other foot and Appleby is sure to be looking over his shoulder given that Haggas still has his most dangerous weapon to fire in the shape of Baaeed, unbeaten in 10 career starts and as short as 5/1-on to make it 11 in the Champion Stakes – the most valuable race still to be run in Britain this year.

Elsewhere on Champions Day, John and Thady Gosden will be hoping to end the season on a high when they saddle the likes of Free Wind, potentially the stiffest opposition to Eternal Pearl in the Fillies & Mares Stakes, and Inspiral, favourite to register her third Group One success of the season in the Queen Elizabeth II Stakes.

It’s fair to say that the Gosdens could do with a lift at the end of what’s been an underwhelming campaign by their usual high standards.

For context, Inspiral and Nashwa are the only two horses from Clarehaven Stables to have struck at Group One level in 2021, highlighting the lack of top-class talent compared to recent years when the likes of Cracksman, Enable and Roaring Lion swept all before them.

Even Inspiral, who made it three wins from four starts this year when successful in the Prix Jacques le Marois at Deauville, hasn’t had things all her own way.

Ante-post favourite for the 1000 Guineas during the winter, she didn’t even make it to Newmarket in the end having reportedly been too slow to come to hand, meaning it will be 23 years next spring since Gosden Senior enjoyed his first and only success in that classic with Lahan.

Something to bear in mind perhaps for supporters of Commissioning, now no bigger than 10/1 for next year’s 1000 Guineas after her striking victory in the Rockfel Stakes?

True, it’s hard to find fault with anything Commissioning has done so far, now unbeaten in two starts and looking every inch a smart filly in the making in the Rockfel as she dismissed her rivals by two and three-quarter lengths.

However, everything we know about the Gosdens’ way of operating tells us that the big spring prizes are far from the be-all and end-all to them, similar in that respect to Dermot Weld, who also skipped Newmarket this year with his subsequent Irish 1000 Guineas winner Homeless Songs.

Weld, of course, is responsible for the ante-post favourite for next year’s 1000 Guineas in the shape of Tahiyra, a dazzling winner of the Moyglare Stud Stakes at the Curragh earlier this month.

Tahiyra has already been put away for the winter, but Commissioning could yet run again in 2022 before attentions turn to next year, with the Fillies’ Mile back at Newmarket and the Breeders’ Cup Juvenile Fillies Turf at Keeneland both potential options.

Then only time will tell whether the clash between Tahiyra and Commissioning materialises next spring, but the Gosdens can at least head into the winter optimistic about what 2023 might bring.

Just bit-part players in the trainers’ championship this year, it will be a surprise if that remains the case for long.