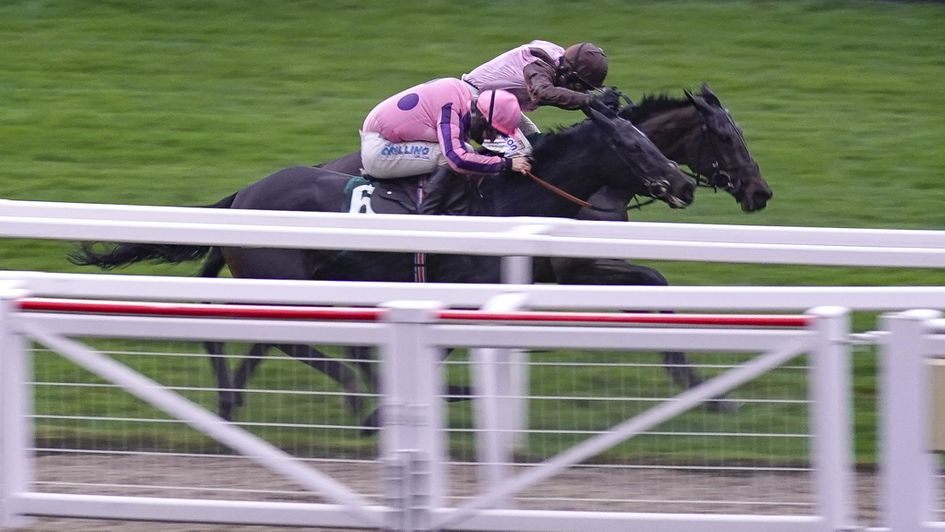 Elle Est Belle (far side) - can strike at Newbury

Top racing analyst Mark Howard is here with five horses he's looking to side with at this weekend's showpiece fixture at Newbury.

Dan Skelton’s team continue in terrific order with Paul Nicholls’ former assistant reaching another notable milestone earlier in the week at Southwell when training his 1000th winner in Britain alone.

The Warwickshire-based handler is adamant he left his high-class bumper mare ELLE EST BELLE short of peak fitness on her hurdles bow at the Berkshire track earlier this month. The daughter of Fame And Glory looked the most likely winner approaching the second last in a two-mile mares’ novice event but was readily outsprinted by the race-fit Nina The Terrier thereafter.

She faces Alan King’s winner once again in the Listed contest which opens the card on Saturday (12.10) and is 5lb worse off at the weights. However, with that run under her belt and the prospect of easier ground with some rain forecast on Friday evening, the five-year-old can turn the tables. Seven lengths third in the Cheltenham Festival bumper last spring, her jumping is likely to be much sharper, too. In the words of her trainer, I suspect we will see a different mare at the weekend.

Who will win the Ladbrokes Trophy?

When it comes to staying chasers, 12-times champion Paul Nicholls is the best in the business and he has had the Ladbrokes Trophy in mind for ENRILO since the summer. Despite stiff competition from across the Irish Sea, thanks to messrs De Bromhead and Mullins, the seven-year-old has plenty more to offer over fences off his rating of 147.

Team Ditcheat have won the prestigious event on three occasions, including twice with the mighty Denman, and this Buck’s Boum gelding was unlucky to lose the Bet365 Gold Cup at Sandown in the stewards’ room. Having crossed the line in front at the Esher track, officials ruled the interference he caused on the run-in, having hung to his left, made the difference to the outcome.

A previous course winner, it has always been the plan to run here first time out and his record on his seasonal reappearances is 1-1-2. A Grade 2 winning hurdler, it would be no surprise to see Enrilo develop into a Grand National contender one day. With few miles on the clock, effective on any ground and stamina not being an issue, he has the perfect profile for the three and a quarter miles event on Saturday (3.00).

Can Jonbon make a winning start over hurdles?

Even though there are a couple of Grade 2 contests on opening day of Newbury’s Winter Carnival, arguably the most interesting runner on the whole card on Friday is the unbeaten JONBON in the two miles maiden hurdle (1.15).

The five-year old is bred to be a champion being a full-brother to eight times Grade 1 winner Douvan and he cost J.P.McManus a chunky £570,000 at the Cheltenham November Sale last year having won an Irish point-to-point for Ellmarie Holden four days earlier. Over four months later, the gelded son of Walk In The Park made short work of eight opponents in a bumper at his local track on his first run for Nicky Henderson. He oozed class and showed speed in both his point and bumper wins and it looks significant he makes his hurdles bow in an event which the Seven Barrows team have farmed in recent years – four victories in the last seven years, including subsequent dual Champion Hurdler victor Buveur D’Air in 2015.

Already as short as 5/1 in places for the Sky Bet Supreme Novices’ Hurdle at the Festival in the spring, he is another star in the making for the former champion trainer. While the opposition includes promising types Boombawn, Charlie’s Glance and Good Risk At All, it will be disappointing if the five year old can’t maintain his blemish free record.

Preview of the rest of the Newbury action

Owner Tim Syder is a big supporter of the track and it is therefore virtually guaranteed he will have had his eye on the Sir Peter O’Sullevan Memorial Handicap Chase on Saturday (1.15) for some time for KILLER CLOWN.

Emma Lavelle’s charge is back down to a mark of 138, which saw him finish a length second in the Grade 3 Greatwood Gold Cup at the same venue in March. Staying on well on that occasion behind the David Pipe trained Umbrigado, he will appreciate the extra quarter of a mile here. The Getaway gelding underwent wind surgery during the summer and blew away the cobwebs when finishing sixth in the Grade 2 Old Roan Chase at Aintree during the Autumn.

A dozen lengths behind Allmankind that day, the third placed Midnight Shadow has already bolstered the form by landing the Paddy Power Gold Cup since. An impressive winner over fences at Kempton on Boxing day last winter, he only has seven runs over fences against his name and his trainer continues in decent form with four winners during the last fortnight. Available at 9/1 with Sky Bet, he should reward each-way support.

Nicky Henderson also boasts a good recent record in the two-and-a-half miles handicap hurdle (1.50) on Saturday and the lightly raced LECALE’S ARTICLE makes plenty of appeal off an opening mark of 125.

The Malinas gelding is evidently fragile with only four career starts on his CV, but his talent isn’t up for discussion. An impressive point-to-point winner in April 2018, he was bought shortly afterwards for €320,000 at the Punchestown Festival Sale on behalf of Joe and Marie Donnelly. Unfortunately, he was then sidelined for 970 days but returned to action with a convincing win at Newbury last December on his hurdles debut.

While he failed to win either of his next two outings, there is a feeling within the camp that he has been let in lightly off his allocated rating. Plans to send the seven year old chasing have been shelved for the time being in order to pick up a decent prize over timber in the meantime. One thing we do know is that he goes well fresh – first time out form figures of 11 - so an absence of 260 days isn’t a concern. Champ (off 139) and The Cashel Man (130) plundered this event in 2018 and 2019 respectively and Lecale’s Article can make it three wins in four years for the same yard.