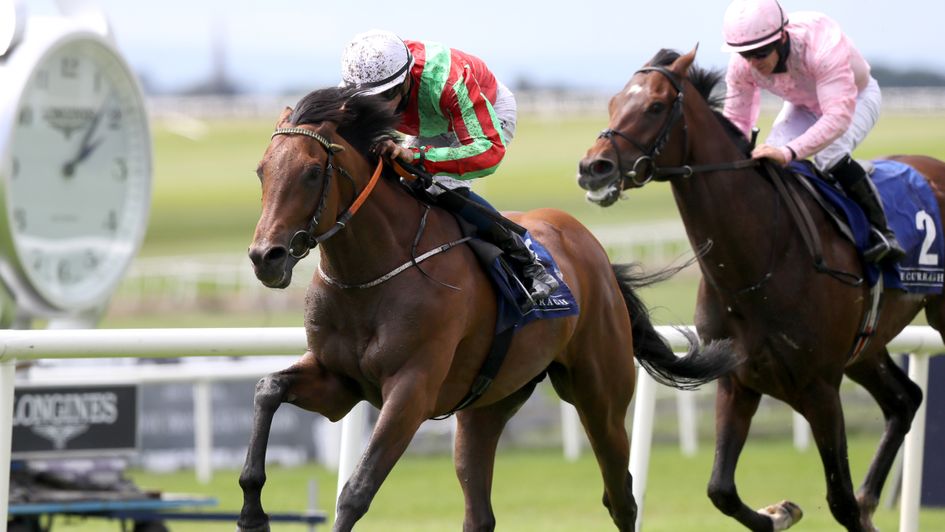 A review of the rest of the action from the Curragh on Sunday as Johnny Murtagh's Earlswood won the Gallinule Stakes.

Earlswood emerged as a potential Derby contender after claiming victory in the Heider Family Stables Gallinule Stakes at the Curragh.

The Pivotal colt joined Johnny Murtagh following the retirement of former trainer John Oxx, since when he had opened his account at Navan before finishing third in the Dee Stakes at Chester.

Stepping up to Group Three level, the three-year-old travelled strongly in the hands of Ben Coen for much of the 10-furlong contest.

Once asked to extend, the 11/2 winner soon settled matters and came home with a length and three-quarters in hand over Arturo Toscanini.

Sky Bet make Earlswood 40/1 from 66/1 for the Cazoo Derby at Epsom, with Betfair and Paddy Power both going 33s.

Murtagh said: “He’s entered at Epsom, but there is free entry into the Irish Derby after winning this race so that’s another option. I’ll talk with the owner and we’ll decide what to do.”

Coen was delighted to ride his first Group-race winner of the season.

“He’s good and hardy. Chester was probably a bit tight for him the last day. It’s a big galloping track here and he loved the ground,” said the jockey.

No Trouble for Bolger two-year-old

She’s Trouble provided Irish 2,000 Guineas-winning trainer Jim Bolger with further success after getting off the mark in the Tally Ho Stud Irish EBF Fillies Maiden at the Curragh.

The Coolcullen handler enjoyed a memorable afternoon at the Kildare circuit on Saturday, with Mac Swiney edging out stablemate Poetic Flare to give the veteran trainer a one-two in the first Classic of the season in Ireland.

Third on her racecourse debut at Navan last week, She’s Trouble was a 4/1 shot to go a couple of places better in the opening race on day two of the Guineas meeting.

Ridden by Kevin Manning, the Fracas filly battled her way to the lead and had enough in reserve in the closing stages to repel the challenge of promising newcomer Dissociate by half a length.

Una Manning, Bolger’s daughter and wife of the winning rider, said: “Delighted with that. She’s very well related – she’s from the family of Saoire (Irish 1,000 Guineas winner) and is a half-sister to Smash Williams.

“Kevin said she handled the ground well today and the plan now would be to try to get some black type.”

She added: “Mac Swiney and Poetic Flare both pulled out very well this morning, nice and fresh and all seems to be good with them.

“Hopefully it will be all roads leading to Epsom for Mac Swiney."

Rest of the meeting...

Baby Zeus made a successful debut for Willie Mullins in the Betway Handicap.

Formerly trained by Ger Lyons, the four-year-old was making his first appearance since August and wearing a tongue-tie for the first time.

After settling his mount towards the rear of the field for much of the way, Colin Keane launched his challenge on the outside of runners in the straight and Baby Zeus responded generously to get up and score by half a length from Mirann.

Mullins’ assistant, David Casey, said of the 6/1 scorer: “He’s been with us a few months and he came in good shape and with good form from Ger’s. They always thought he was a decent enough horse and he’d shown us that at home.

“We weren’t overly sure about the ground, but he seemed to handle it well and it’s great that he won.

“We’ll see what options are there for him and see what the handicapper does. Hopefully he can progress up the ladder.”

Mullins completed a double on the afternoon when Foveros justified strong market support in the concluding Heed Your Hunch At Betway Handicap.

Always travelling strongly in the hands of Wayne Lordon, the 11/4 market leader ploughed through testing conditions to pull five and a half lengths clear of Weather Alert in the closing stages.

Casey added: “He’s been working good and the conditions were the main thing.

“We’ll find another one for him. There is probably one here on Derby weekend and then maybe at Galway.”

Ridden by Declan McDonogh, the 9/2 favourite saw off stable companion Fame And Acclaim by half a length.

Wild Dollar 20/1 broke his duck at the third time of asking when claiming first prize in the Betway Irish European Breeders Fund Maiden, but only after being awarded the race in the stewards' room.

Eddie Harty's son of Zoffany looked to have been denied victory when just failing to reel in Citronnade in a thrilling finish, but the eventual winner did suffer interference inside the last 100 yards and the stewards deemed it to be significant enough to warrant the placings being revised.