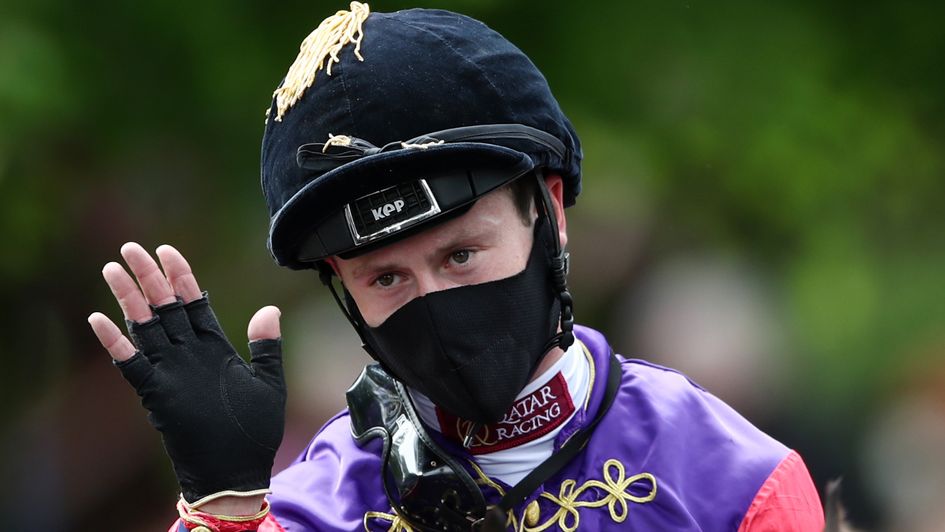 Oisin Murphy had a four-timer at Ffos Las

Champion jockey Oisin Murphy extended his lead in this year’s title race with a four-timer at Ffos Las on Tuesday.

Murphy began the afternoon with a tally of 62 winners for the campaign, leaving him four clear of Tom Marquand on 58 and six ahead of William Buick on 56.

Marquand enjoyed a double at Wolverhampton, where Buick drew a blank, meaning Murphy will head to Sandown on Wednesday evening with a six-winner lead – but he will not be resting on his laurels.

He said: “I’m doing my best and Tom and William are riding great.

“I’ve obviously had a lot more suspensions than the two of them, but hopefully we can all stay out of the stewards’ room and keep riding winners.”

The dual champion first struck gold aboard the Andrew Balding-trained Neenee’s Choice (5/4 favourite) in the Download The vickers.bet App Maiden Stakes – and followed up aboard his stablemate Valley Forge (4/11 favourite) in the following race.

🥇🥇🥇 At the top of his game - it's another hat-trick banged in by the Champ!

🏇 @oismurphy claims his third hat-trick of victories in just 7⃣ days, as SIYATA scores at @FfosLasRC.

“I had some lovely rides on paper and Andrew’s horses have been in great form, so it’s nice to get some winners for him,” Murphy added.

“It’s a lovely track – flat and left-handed and it rides well. I don’t get to come here often, but it’s always nice.

“Neenee’s Choice is lightly-raced and I think there’ll be some winners come out of his race – the first three home are capable horses.

“It was nice to get Valley Forge’s head in front. He’s a staying type of horse and he toughed it out.”

Murphy swiftly made it a treble, with Roger Charlton’s 4/1 joint-favourite Siyata getting up close home in the vickers.bet Free Bets With Our Betclub Fillies’ Handicap, before making it four on the day with Rod Millman’s Silent Flame (100/30) in the penultimate race.

He appeared to hold strong claims of landing a fifth winner in the concluding vickers.bet Try Our Live Casino Handicap, but had to make do with the runner-up spot on 9/4 joint-favourite Fard, with Glamorous Force and Trevor Whelan holding on by a length.