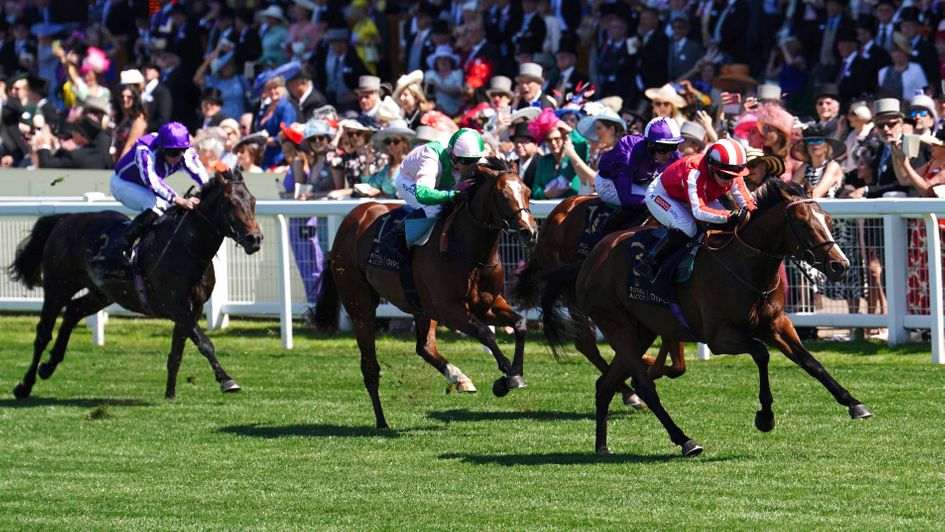 Tony McFadden highlights three points of interest at the Curragh and Haydock on Saturday.

Only six have been declared for the Phoenix Stakes (16:15 Curragh) - the first Group 1 for juveniles in Europe this year - but it is a high-quality affair which features four of Timeform's ten highest-rated two-year-olds, including Bradsell, who sits top of the pile.

Bradsell achieved the notable feat of earning a Timeform rating of 100 at the first attempt when winning by nine lengths at York and he then built on that promise to win the Coventry Stakes at Royal Ascot, beating Persian Force by a length and a half with Royal Scotsman a neck back in third and Blackbeard, the 5/2 favourite, a further two lengths behind in fourth.

It looked like a good edition of the Coventry at the time, but the form has worked out even better than expected with the second, third and fourth all winning at Group 2 level.

That Coventry Stakes form identifies Bradsell (Timeform master rating 114p) as the horse to beat in the division, but Persian Force (110) and Blackbeard (110) both improved on their Ascot efforts when winning the July Stakes and Prix Robert Papin respectively and they will offer a stern examination of the standard-setter's credentials.

Blackbeard's Ballydoyle stablemate Little Big Bear (108p) is also a big player after justifying strong support in the Windsor Castle Stakes at Royal Ascot and then following up in the Anglesey Stakes here last month.

The last time there were four runners heading into the Phoenix Stakes with a Timeform rating of 108 or higher was in the 2008 edition won by Mastercraftsman, so that highlights the unusual strength in depth to this year's renewal.

The remaining pair haven't achieved quite so much on the figures but Shartash (104p) did get the better of Blackbeard in the Railway Stakes, a race in which Apache Outlaw (99) was a close-up third.

Future stars unleased at the Curragh?

Aidan O'Brien - who is looking to win the Phoenix Stakes for a remarkable 17th time but for the first year since 2017 - has enjoyed an exceptional time of things with his two-year-olds this season and is operating at a remarkable 38% with his juveniles, sending out 25 winners from 66 runners.

Blackbeard, Little Big Bear, The Antarctic, Never Ending Story, Meditate and Statuette have all won at Group level for O'Brien this year and the trainer will be hoping that some of the exceptionally well-bred juveniles he introduces on Saturday will follow suit.

In the opening seven-furlong maiden (13:30) O'Brien is represented by Boy Scout, a 925,000 guineas purchase who is a half-brother to the smart Group 2 winner Mrs Sippy, and Salt Lake City, who is the first foal out of Queen Mary and Flying Childers winner Heartache.

In the following seven-furlong fillies' race (14:05), which is restricted to two-year-olds who didn't run before the start of June and haven't been placed at Group or Listed level, O'Brien unleashes the latest progeny from one of Coolmore's most successful families.

Delightful, a daughter of Galileo out of dual Group 1 winner Lillie Langtry, is a full sister to Classic winners Minding, Tuesday and Empress Josephine.

O'Brien's other newcomer on the card is Cairo in the six-furlong maiden (14:40). Cairo is out of a lightly-raced listed winner who is a half-sister to the very smart Gustav Klimt.

Is Grocer Jack as good as Newbury run suggests?

The pick of the action in Britain on Saturday - at least for those who aren't Shergar Cup aficionados - comes at Haydock, where Grocer Jack, an impressive winner at Newbury last month, contests the Group 3 Rose of Lancaster Stakes (15:00) and bids to build on the positive impression he created on his British debut.

Grocer Jack had shown smart form in Europe for Waldemar Hickst, winning Group 3s in Italy and Germany last season, and he had shaped with promise on his first couple of outings for William Haggas in Saudi Arabia and France, but he raised his game significantly when bolting up in the Steventon Stakes at Newbury, storming nine lengths clear and increasing his Timeform rating to 124 from 117.

A rating of 124 places Grocer Jack right on the cusp of being considered a high-class performer on Timeform's scale and, for context, he is rated very similarly to stablemates Alenquer (124) and Dubai Honour (123) who have both made an impact at Group 1 level (Alenquer won the Tattersalls Gold Cup in May).

Grocer Jack is clearly a talented type but he was seen to good effect at Newbury, where he was allowed to stride on and wasn't harried in the lead, for all he went a good clip. The question he must answer is whether he can replicate that level of form in a more competitive environment.