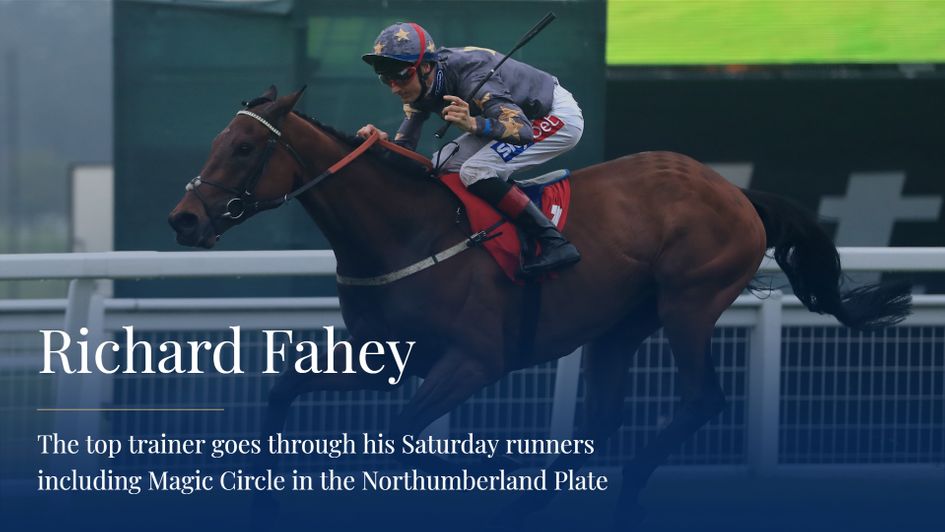 Magic Circle makes his first start for Richard Fahey in Saturday's Betfair Northumberland Plate. Check out his guide to the full team.

She is a sharp, early two-year-old who is ready to run. We’re happy with what she’s done at home and hope she’ll go well on debut.

She’s taken quite a lot of handling at home so we’re just delighted to get her to the track. She does show a bit but I’m sure the run won’t be lost on her.

A filly we like but she ran terribly on debut at Catterick last year. She’s worked well again this spring so I hope she shapes better here.

She looks one for handicaps later on but didn’t get home on debut at Haydock and the drop in trip here is going to suit.

He’s a colt we like, a son of Mehmas, and I’d be hoping he runs very well on debut. We’re happy with everything he’s done at home in the build-up.

He’s in great form and has been ready to run for ages but kept being balloted out of races. He has some form on all-weather surfaces and is ready to go.

I thought she ran a great race when fourth in a Listed race on her return at Ayr and on that form has a real chance here. She won it last season so we know track and trip suits and if she’s alright backing up again so quickly I’m sure she’ll run a big race.

It’s been frustrating trying to find the right race for him. He’s going well and while his best form always seems to be on the all-weather, there’s no reason why he shouldn’t be as effective on turf.

He ran absolutely terribly at Haydock last time and we don’t know why. Nothing has come to light and he needs to bounce back as he’ll be tailed off if running like that here.

He’s quite a high-profile horse but isn’t getting any younger and doesn’t show a lot at home, which you might expect. I do know he’s very fit and very well and hope – rather than think – he’ll run ok. On his homework you’d think he wants four miles but he’s clearly very useful on his day.