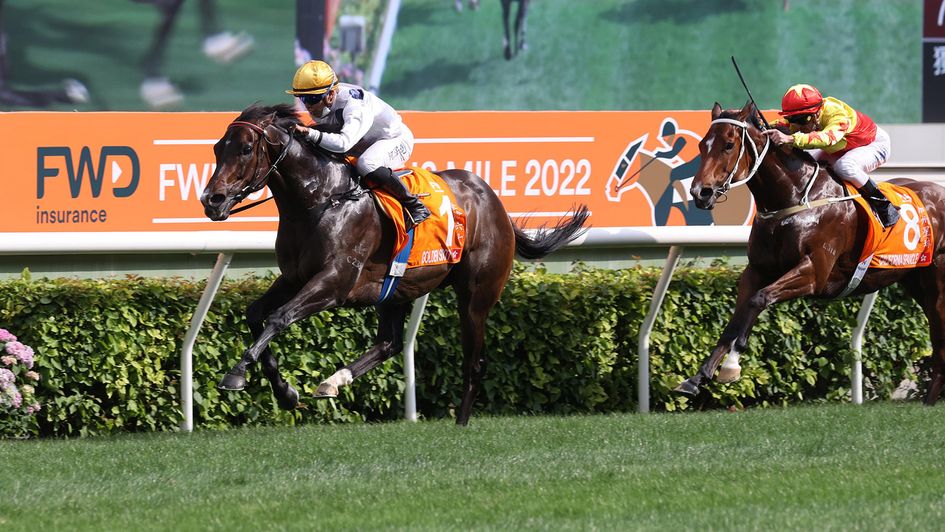 Golden Sixty has thrown down the gauntlet to international challengers once again with an impressive reappearance win in the Group 2 BOCHK Jockey Club Mile.

On his first start since April, Hong Kong’s superstar miler overcame a slow pace to motor home down the Sha Tin straight under Vincent Ho and wear down race favourite California Spangle in the final furlong.

Golden Sixty is now expected to defend his Group 1 Hong Kong Mile crown on Sunday 11 December, where he could face the likes of Kinross, Saffron Beach, Salios and Schnell Meister.

After the race Ho said: “It was crawling at first and the turn I knew, around the 600 (metre mark), that Zac (Purton) will pick up the pace for sure, so I was just keeping an eye on what he was doing and I had to come out and make my move earlier.

“I knew Golden Sixty would have the heart to run him down but he's only 80 percent fit, so the last bit is his mental toughness. Definitely all credit to him and the team – we're looking forward to December now.”

Trainer Francis Lui was also full of praise for Golden Sixty’s attitude, and said: “Same like before, he has a very good fighting heart. When he came close to the frontrunner, he really wanted to pass him.

“Honestly, he is an easy horse to train so I think after this race his condition will improve.”

“First of all, I would just like to send my well wishes to Karis (Teetan). Obviously, he would (normally) be on this horse and it’s a pleasure to be warming the seat for him for when he gets back – and I’m sure he’ll be back very shortly,” McDonald said.

Romantic Warrior’s trainer Danny Shum explained the reason for starting Romantic Warrior off over 2000m: “It was a really tough to decision whether to run him at 1600m or 2000m. At the end of last season, I planned to run him at 1600m for his first race but he twisted his right foreleg and he got a splint, so he had to be off for three weeks until he had totally recovered.

“It is very hard to fight with Golden Sixty and California Spangle, so I talked to the owner about changing the plan and running at 2000m.

“He ran super for his first start at only 80 percent fit. James told me that he will improve a lot after this run so I'm quite confident he will run a good race (in December),” Shum said.

“Obviously, he’s done it tough from awkward gates this time in but behind the gates I saw six jockeys trotting their horses up and they’ve all got speed and I knew it was going to be a bit messy,” Purton said.

“But he didn’t begin that great. I didn’t have any option but to take the spot I got, which worked out well with the way the race was run. Master Eight got in my way a little bit, just prior to straightening, but I just tried to straighten him and it cost me a little bit of ground as I swung around him.