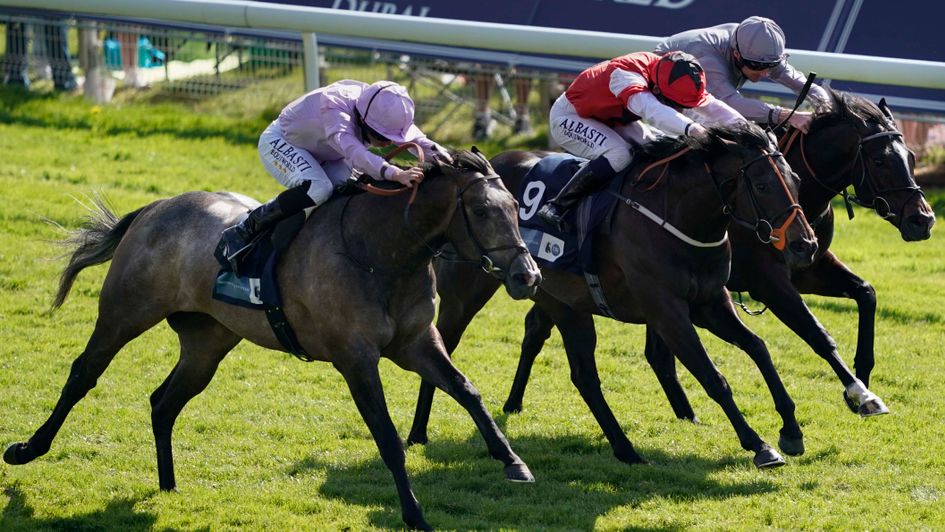 Garrus (nearside) gets on top at York

Garrus appreciated a drop in class as he landed the Group 3 Barriere Prix de Meautry for Charlie Hills under Ioritz Mendizabal at Deauville.

The five-year-old grey has run well on his last two assignments both in Group 1 company in the Diamond Jubilee at Royal Ascot and July Cup at Newmarket, finishing fifth and eighth respectively when not beaten far on either occasion.

Sent off 31/5 in France behind favourite Duhail in the market, he had a length and a quarter in hand of that rival at the line after travelling powerfully towards the stands' rail from his low draw in stall one.

Duhail finished well down the centre of the track for second with Coeur De Pierre back in third.

Paddy Power reacted by cutting the winner to 25/1 from 66s for the British Champion Sprint at Adcot on Champions Day in October.

The grey is 25s from 66/1 for the Champions Sprint @Ascot on Champions Daypic.twitter.com/4O7wWWKQlv

The Lambourn trainer said: “It will probably come a bit too soon, I would think.

“It’s great to win a Group Three, and now I hope we can start looking at other better races again.

“But there aren’t too many of them now left (in Britain this season).

“We’ll see how he comes back and work from there, do the right thing by the horse.”

Garrus’ programme will not be entirely dictated by ground conditions, but Hills acknowledges a sounder surface may be preferable.

“He’s quite versatile with the ground,” he added.

“It was absolutely bottomless when he ran at Windsor and was second to Dream Of Dreams, but I think he does appreciate a bit faster ground really.

“We were really patient with him last year – the horse never ran, but we were just never really happy with him.

“We got him gelded through the winter, and ever since then he’s been moving so much better and running a lot better as well.

“We’d been putting him in the deep end a bit, so we were quite conscious that we wanted to find a slightly lower-grade race.”