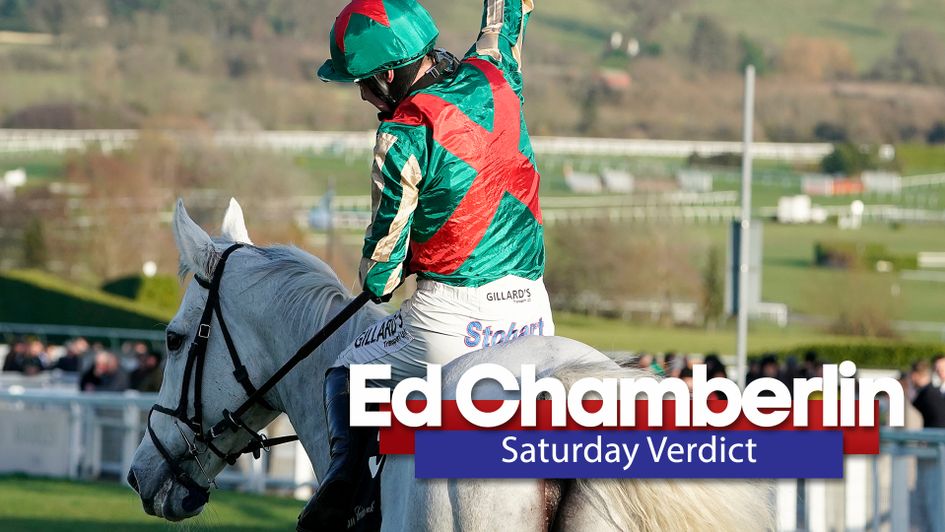 Warthog landed the feature at Cheltenham on Saturday

ITV presenter Ed Chamberlin reflects on Warthog's win for David Pipe in the feature race at Cheltenham on Saturday while he addresses the negativity he sees within the sport.

By Cheltenham standards it felt like a fairly low-key couple of days, but as always in jumps racing it was full of fabulous stories and a feature of this season has been the sharing of the love.

On Saturday it was David Pipe’s turn as his Warthog improved from his BetVictor Gold Cup run to land the Caspian Caviar after a battling finish.

It looked for all money like Spiritofthegames was going to win after he went past Warthog after the last, going over a length up, but the Pond House grey dug deep to get his head in front where it matters.

It was great to see David Noonan’s celebration, punching the air with pure joy as you can see in the main picture, and he did it the Monkerhostin way having finished third in the BetVictor before landing the December pot.

The race still hasn’t been won by a Cheltenham debutant for 28 years, the BetVictor form works out season after season and as we’ll see in March Cheltenham experience is everything.

The opposite was the case in the Unibet International Hurdle because when Call Me Lord first came over from France Nicky Henderson pretty much vowed never to run him left-handed.

He jumped straight as a die today and deserved that win on a big stage after some near misses.

Whether he’s a Champion Hurdle winner I would doubt it, but it was interesting to see Henderson’s face light up when he was talking about Fusil Raffles to Oli Bell.

It looks like he’s the one for the Christmas Hurdle and at this point we should say ‘get well soon’ to Daryl Jacob who unfortunately misses good rides like that over the festive period because of his broken hand.

Two horses come out of the International with major credit.

Pentland Hills was the eye-catcher of the race for Ruby Walsh and Richard Hoiles and I thought Ch’tibello ran a terrific race giving 4lb to the winner. It’ll be interesting to see how this form works out in the build-up to March.

Talking of faces lighting up, I’m sure ITV Racing viewers would’ve noted the twinkle in Walsh’s eye when he was talking about Willie Mullins’ Chacun Pour Soi.

Ruby rode Chacun Pour Soi in a piece of work last weekend and judging by his reaction this horse is clearly a major contender for the Champion Chase – I can’t wait to see him at Christmas now.

Let's focus on the positives

"Negativity" has been rife up and down the land this week.

When I joined ITV a friend inside the sport said I’d be quickly driven out by the "relentless negativity in racing". It’s been nothing like that bad but this week has seen racing excelling at shooting itself in the foot. Yes, racing has lots of problems to solve and far too many factions. But so do many other sports. What they do better than us is getting on the front foot and promoting their sport.

As Geoffrey Riddle from World Horse Racing pointed out on Twitter, we are actually the envy of those other sports because we have two excellent specialist channels and 94 days of terrestrial television coverage. Quiz question: which sport, other than football, still has a magazine show on terrestrial television?

I fully accept criticism and negativity is part of the job. The reason I approach things differently is because my goal is to make racing accessible and understandable for all.

We live in a very different world now and it saddens me enormously to see newspapers struggling. I love newspapers. As the ITV logistics department will confirm I’m meticulous in my routine of reading every single paper over breakfast.

However, racing has actually reacted well to this new world. I’ve enjoyed the explosion of racing podcasts, blogs from old and young, digital content and I firmly believe horse racing ‘does’ social media better than any other sport. You only have to look at the ITV Racing viewing figures over the last three years to see the popularity of horse racing.

Two weeks ago 296,000 people tuned in to watch the The Opening Show. One of the only sports magazine shows still left standing.

I’ve also enjoyed the BHA’s common sense response to the unfortunate situation at Sandown last weekend. Let’s hope the ridiculous information void, which I wrote about last week, never happens again and races are voided much quicker in future with betting consequences of such a decision explained in a clear and timely manner.

I’d also go a step further and pinch an idea from football and change the way stewards enquiries are conducted. Why do punishments and bans have to be handed out so quickly? Why do we need to create such angst? Why can we not take the sting out of a difficult situation like we had after the four-miler at The Festival and on Saturday at Sandown and refer the incident to BHA headquarters for a decision within the following 48 hours.

Just as the punishment for a controversial incident in a Premier League match on Saturday is often announced on the Monday afternoon. This allows the dust to settle, everyone to clear their heads and common sense should prevail.

Most importantly from Saturday all the next day’s headlines and social media chat would not have been about seven jockeys with ten day bans but about the brilliance of Defi De Seuil and Un De Sceaux. That’s the best way to promote our brilliant sport and reduce that negativity.